Chicago Cubs' lefty Jon Lester made one mistake in last night's game and Bryce Harper made him pay for it, sending a solo home run out to left in Wrigley Field in the Washington Nationals' 3-0 win. It was Harper's 18th HR of the season and 13th in May.

Going into last night's matchup with Jon Lester and the Chicago Cubs, Matt Williams knew the Washington Nationals were going to have to take advantage of whatever opportunities they could get against the veteran left-hander.

"He's a pro, he's been around forever, he's battle-tested, he understands it. So for us tonight it's get the ball up, we've got to get a pitch up in the strike zone to hit." -Matt Williams on approach vs Lester on 106.7 the FAN in D.C.

"He's a pro, he's been around forever, he's battle-tested, he understands it," Williams told 106.7 the FAN in D.C.'s The Sports Junkies. "So for us tonight it's get the ball up, we've got to get a pitch up in the strike zone to hit."

The first run the Nats scored came on what should have been a double play grounder off Ryan Zimmerman's bat.

Yunel Escobar singled to left to start the top of the fourth, and Bryce Harper worked the count full and took his major league-leading 42nd walk, but Lester got the grounder he wanted out of Zimmerman only to have Addison Russell bounce a throw to first on the 4-3 relay that Anthony Rizzo couldn't pick. Escobar scored on the error to make it 1-0 Nationals.

Two innings later, Lester made his first, and only, mistake of the outing in his third matchup of the game with Harper.

After falling behind in the count, 2-0, Lester got a swinging strike with an 89 mph cutter, but then left a 93 mph 2-1 fastball up in the zone that didn't quite make it outside...

The home run was Harper's 18th of 2015 and his 13th in the month of May. It was also just the second homer off Lester by a lefty this season.

"We want to create opportunities for ourselves," Williams told reporters when asked about managing to scratch two runs out against the Cubs' left-hander.

"We had guys on first and second and got the miscue and then Harper had a great at bat against [Lester] and hit one the other way, so we've got to scratch and claw against guys like that and tonight we did and we had just enough."

"You make one mistake... that's what makes good hitters. They don't miss them. And I've learned that over the years from playing with Manny [Ramirez] and David [Ortiz] and guys like Mike Lowell." -Jon Lester on Bryce Harper's home run in Wrigley

"The thing that makes really good hitters is that when you make mistakes they don't miss him," Lester said.

"That was really the only mistake I made to him all night. I felt like I was down, I was on the corners to him, made some really good pitches. He took a really good pitch his second at bat for the walk that I thought could have potentially gone either way there. Yeah, you make one mistake... that's what makes good hitters.

"They don't miss them. And I've learned that over the years from playing with Manny [Ramirez] and David [Ortiz] and guys like Mike Lowell. Especially against a guy like that, he has power to all fields and that's what makes him so dangerous, is you can't just play the pole or whatever, you just have to continue to have to try to make pitches down, hopefully he beats it into the ground, if he gets a hit he gets a hit, you move on, but obviously to try to keep the ball in the ballpark is key and I elevated it a little bit and he put a good swing on it."

When Lester says Harper has power to all fields, he's spot on. In fact, the distribution of the 22-year-old slugger's 18 home runs this season is fairly ridiculous...

"We made a mistake on the infield and they got a run on the double play and then the home run," Cubs' skipper Joe Maddon said. "Harper did hit that ball well, that ball was well-struck, so you have to give them credit and then their last home run too on a 3-0 count, that's bully for them." 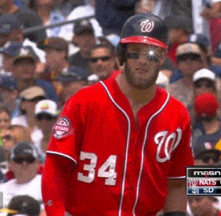 The last home run was a Danny Espinosa blast off lefty reliever Travis Wood that made it 3-0 Nationals.

Max Scherzer was pretty good too, with 13 Ks in seven scoreless innings in Chicago.

With two wins in the three-game set in Wrigley Field, in which they outscored the Cubs 7-4 in three tightly-contested affairs, the Nats won their ninth straight series and their 28th game of the year to improve to 28-19.

"You figure you come to Wrigley," Williams said, "and you've got two days of the wind blowing out pretty good and one day where there's really relatively no wind and not a lot of runs are scored. It's a testament to the pitching from both sides and we're fortunate to get two out of three."