Washington Nationals' skipper Matt Williams talked to reporters about Stephen Strasburg having "a little issue underneath his shoulder blade" during his start against the Miami Marlins tonight. Strasburg was out after just three innings...

Share All sharing options for: Nationals' Stephen Strasburg leaves start after three innings with "a little issue underneath his shoulder blade"

Stephen Strasburg was clearly uncomfortable on the mound tonight in the nation's capital. Strasburg grimaced after delivering pitches in the first, drawing the attention of his catcher, Wilson Ramos, his manager Matt Williams in the dugout and the MASN cameras which showed replays of his reaction after at least one pitch.

When his obvious discomfort continued, the Nationals' second-year skipper and Nats' trainer Lee Kuntz visited him on the mound in the second, and after the third inning, though he put on a helmet and tried to argue his case for remaining in the game, he was lifted for a pinch hitter.

"He's got a little issue underneath his shoulder blade. Had it last start. Could be an alignment issue. But as he finishes pitches it grabs him every once in a while..." -Matt Williams on the issue which led to Strasburg's early exit

After the game, a 2-1 loss to the Miami Marlins in which a throwing error by Strasburg in the second led to the eventual winning run scoring, Williams discussed the decision to end the right-hander's outing after just three innings in which he threw a total of 64 pitches.

"He's got a little issue underneath his shoulder blade," Williams explained.

"Had it last start. Could be an alignment issue. But as he finishes pitches it grabs him every once in a while.

"Tonight it got a little bit worse. So we'll have to have the chiropractor look at him. Shoulder is good, elbow is good."

Strasburg struggled at the start last time out, against the Mets in Citi Field, throwing 52 pitches in two innings before he settled in and put together a solid, though short, 5 ⅓-inning outing in which he threw 100 pitches and earned the win.

"He had it a little bit in New York and worked through it," Williams continued. "Tonight he wanted to work through it. Last time out it loosened up for him. Tonight it wouldn't loosen up. So, we'll see what the doc has to say. He said it feels like there's a rib out, like an alignment issue. So didn't want to take a chance and have him change mechanics and hurt something, so we got him out of there."

"They just asked how I was feeling. And I said it was just kind of a little gritty back there, but I feel like I can get through it." -Stephen Strasburg on issue with his shoulder vs Miami

"I mean, it's something that's been lingering," Strasburg explained when he spoke to reporters.

"I just felt it more and more, and I feel like it was something that -- I feel like I could have gone through it, but at this point in the season you just want to get it right and not alter your mechanics too much and I think that's the big thing is that when I did feel it I started kind of feeling for it."

When Williams and the Nationals' trainer visited Strasburg on the mound in the second, he talked them into leaving him in the game. Williams was asked what the 26-year-old right-hander said to convince them he was okay to keep going.

"Just that he felt fine, he was going to work through it," Williams said. "But the last inning there, again, his pitch count got really high, got up there and he was more and more uncomfortable with it as he went through the last inning and then when he got back in there, we decided we're not going to take that chance."

"They just asked how I was feeling," Strasburg said when asked the same. "And I said it was just kind of a little gritty back there, but I feel like I can get through it."

Strasburg said the issue wasn't something that he's dealt with before the last two outings.

"The best way I can put it is, if you're driving a car fast over speed bumps it's kind of a little irritation, kind of rattles the cage a little bit." -Stephen Strasburg on shoulder issue vs Marlins

"I wouldn't say specifically, no," he explained. "I think it's just something I probably need to get an adjustment or something like that. The best way I can put it is, if you're driving a car fast over speed bumps it's kind of a little irritation, kind of rattles the cage a little bit. I think it's something that I can go out there and let it go, I was just feeling it a little more trying to throw fastballs away to righties, down and in to lefties, and it kind of caused me to alter my mechanics a little bit too much and lost some command from it."

Asked if working with a chiropractor was part of his normal routine, Strasburg said he has previously, yes.

"I mean, I've done it before. I think it's probably just something that for one reason or another it just kind of creeps up in there sometimes and I've just got to get it fixed and hopefully get back out there for the next one."

Williams told reporters he couldn't say whether Strasburg will have to miss any time or possibly go on the DL.

"I don't know," he said. "I don't think we make that decision yet. He's perfectly fine otherwise.

"I wasn't feeling it on pitches arm side," Strasburg explained later in his post game interview.

"It was just kind of when I wanted to get a little bit of extra extension out there is when I started to feel it a little bit."

"It doesn't allow him to throw the ball where he wants to throw it," Williams said.

"Anybody that's ever had any issue like that, it can be painful, so we decided to make sure that we were safe in that regard."

Fish 2-1 over Nats: Strasburg out after just 3 IP 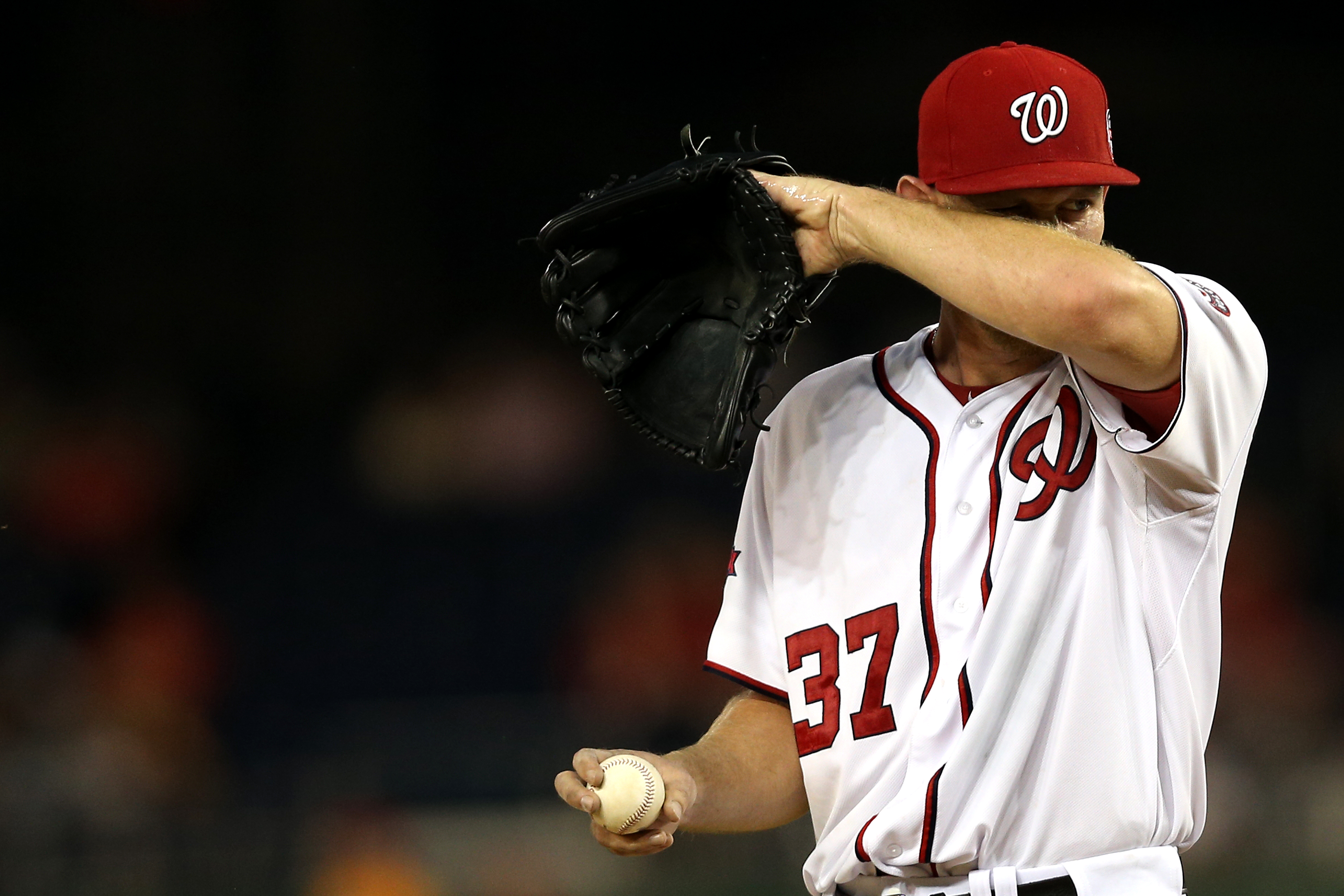 Asked how much it was affecting him, Strasburg said, "I don't know."

"I mean, you feel it on some and usually it's when I'm trying to do too much and not staying within myself, then it's kind of, just kind of something that you try to put in the back of your head, but when it keeps going over and over again it becomes a little bit harder to do that."

As for whether or not Strasburg will need an X-ray?

"I wouldn't think so," Williams said. "I would imagine that we'll take all means necessary to see what's going on but we won't know that until we get a chance to have him get here tomorrow and have him looked at and see where we go from there."