Matt Williams was asked today, after Nationals' slugger Bryce Harper's three home run game, if the 22-year-old was becoming a leader for the Nats? "I think that the biggest way you become a leader of your team is by doing stuff like he did today," Williams said.

Share All sharing options for: Nationals' Matt Williams on Bryce Harper leading without saying a word

Washington Nationals' outfielder Jayson Werth, who sat out of the last two games with a "cranky" surgically-repaired right shoulder, was asked during an MLB Network this morning what it meant to him that he was referred to by those within the Nats' organization as a leader in the clubhouse?

When former Nationals' first baseman Adam LaRoche was asked by Washington Post columinst Barry Svrluga this Spring for his impression of Bryce Harper, after LaRoche left as a free agent following three years on the team with the now-22-year-old outfielder, LaRoche expressed sentiments similar to Werth's when he discussed what Harper needed to do to take the next step and earn the respect of his teammates:

"'When the time comes, when he really has the respect from all his teammates and coaches, I think that’s when you’ll see a different ballplayer,' LaRoche said. 'You see signs of unbelievable stuff. I think that’s when it’ll be really all the time — when he can see kind of big-picture, long season, there’s 25 guys in here that we all need to care about, everybody needs to look out for each other. Once he gets a grasp of that, he’ll be really good.'"

After Harper hit three home runs in his first three at bats this afternoon, drove in five runs total, and helped lead the Nationals to a 7-5 win, Nats' skipper Matt Williams was asked if Harper, who had a .265/.416/.561 line, five doubles, eight home runs, 26 walks and 36 Ks in 29 games after the win, was finally emerging as a leader for the Nationals who drafted him with the top pick of the 2010 Draft?

"The way he's led thus far, is he's taking his walks, he's providing opportunities for [Ryan Zimmerman] or anybody else that hits behind him. He's also doing what he did today." -Matt Williams on Bryce Harper

"I think that the biggest way you become a leader of your team is by doing stuff like he did today," Williams said.

"Being ready to play every day. Being excited about that. Just because you hit a homer doesn't mean you're a leader, but the way you go about it -- so, the way he's led thus far, is he's taking his walks, he's providing opportunities for [Ryan Zimmerman] or anybody else that hits behind him.

"He's also doing what he did today. He's playing exceptional defense. All of those things are qualities of a true leader, without having to open his mouth. And that's the ultimate leader."

Harper's eight home runs on the year are the second-most in the National League, behind only the Los Angeles Dodgers' Adrian Gonzalez and the Cincinnati Reds' Todd Frazier, both of whom have hit nine.

Harper's 21 runs scored so far this season are the third-most in the NL behind Gonzalez and the St. Louis Cardinals' Matt Carpenter at 23, and the San Diego Padres' Wil Myers with 25.

"His patience is key," Williams said, and if Harper takes what is given and waits for his pitch, he knows what to do with it.

"If he can be patient enough then he can work himself into counts that he can drive baseballs," Williams continued.

"So that's an important part of his game right now. So, I know he's pleased with it, we're all pleased with the way he's going about it."

It's hard not to be pleased with a three home run day.

"Definitely one of the better moments of my career," Harper told reporters.

Harper took Miami Marlins' starter Tom Koehler deep in each of his first three at bats. He sent a 92 mph 0-1 fastball up high and outside out to left field in the bottom of the second for a solo blast that cut the Marlins' lead in half, 2-1, then hit a 93 mph 0-1 fastball out to right in the third for a two-run blast that landed in the upper deck and put the Nationals ahead, 4-2.

Koehler tried an 0-1 slider knee-high outside in the fifth, but Harper still yanked it right for his third straight home run and another upper deck blast that made it 5-2 Nationals.

"He stayed on the first one to the opposite field and hit it well," Williams said after the 7-5 win. 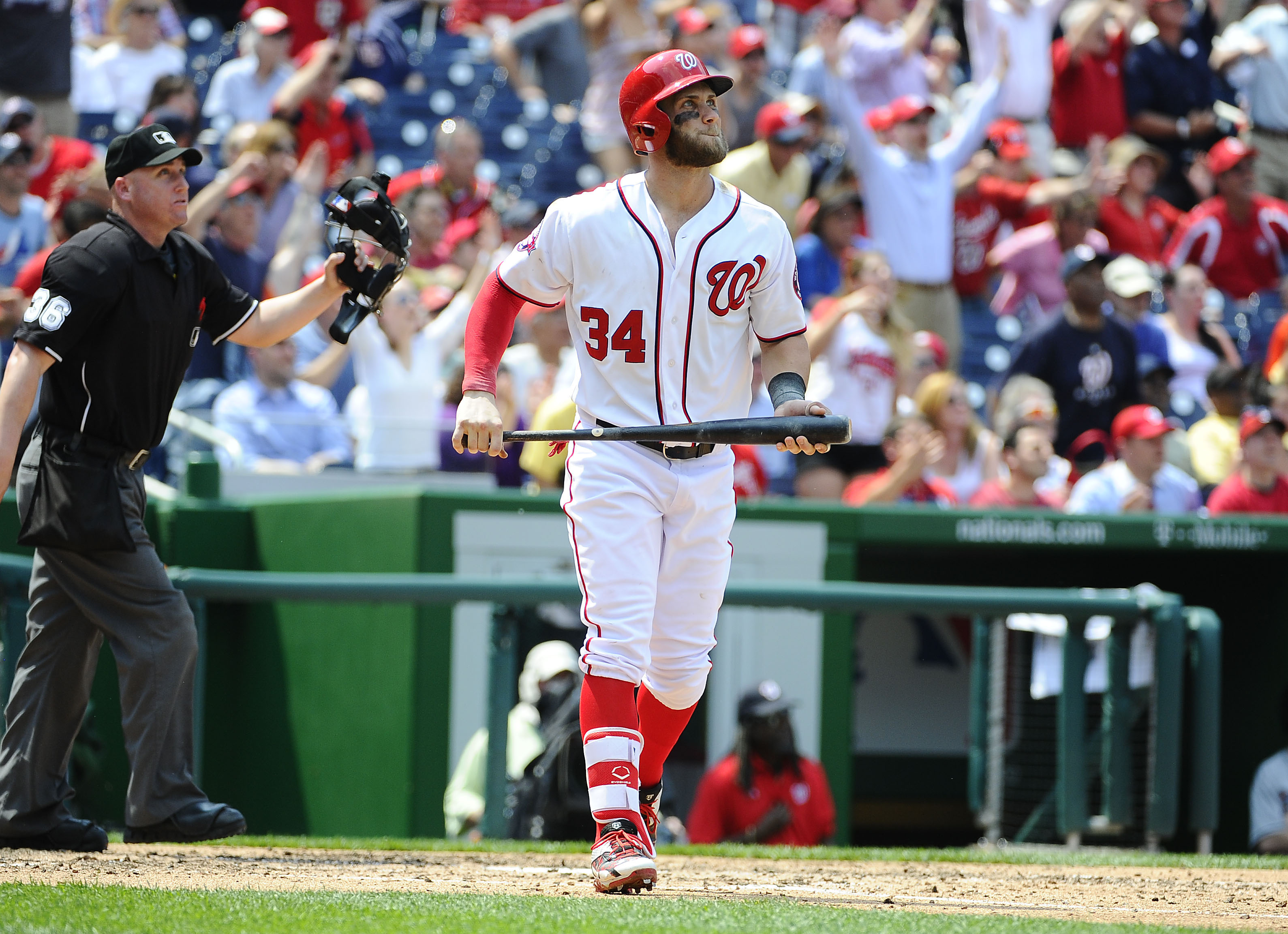 "Of course you get a little better carry during the day and it's warmer weather of course, but certainly no doubt about the other two.

Harper's swing on the second and third blasts, Williams said, "... was short and compact and he's seeing the ball well by his number of walks this season, we know that, and he got some pitches to hit today."

And the player the Nationals need him to be...