Washington Nationals' prospect Lucas Giolito makes his 2015 debut tonight with the Potomac Nationals after spending the last few weeks at the Nats' training facilities in Florida. Can Giolito continue to build on a stellar 2014 campaign...

Matt Williams was asked last month for his opinion, as a former major league slugger, on what makes Washington Nationals right-hander Max Scherzer so difficult a pitcher to face?

"He's low 3/4s [arm slot]," Williams explained, "so for the righty it's a little bit crossfire. It's the ability to pitch at 92 and reach back for 96 when he needs it. So that difference between 92 and 96 is pretty good."

"The ability to change speeds with his fastball is important," he said, "not just breaking ball."

"In a full season you find a comfort zone where you like to pitch at and then you’re able to raise your velo up a little bit when you need it..." -Lucas Giolito on lessons learned during his 2014 campaign

Earlier in the month, after watching Stephen Strasburg dominate Philadelphia Phillies' hitters in a start in Nationals Park, Williams said that it was as good as he'd seen the top pick of the 2009 Draft.

"I think when he throws hard and he sits at 95 or 96, the changeup isn't necessarily for a strike," Williams said.

"So if the opposing team can recognize that then they don't swing at it. Today he threw it for strikes when he wanted to. It just adds more to his repertoire."

Scherzer sits around 93 mph but has topped out at 97.5 mph this season. Strasburg has averaged 94.5 mph with his four-seamer and thrown it as hard as 96.9.

Lucas Giolito, when he was in the nation's capital last September to be recognized as the Nats' Minor League Pitcher of the Year for 2014, told reporters he learned the lesson his fellow first-round picks eventually did during his first full season in the Nats' system last summer.

"I kind of learned that you don’t have to go out there and try to blow it out as hard as you can every single time..." -Lucas Giolito on lessons learned in the 2014 campaign

"I kind of learned that you don’t have to go out there and try to blow it out as hard as you can every single time," Giolito said.

"That’s the difference. In a full season you find a comfort zone where you like to pitch at and then you’re able to raise your velo up a little bit when you need it and then also work in your offspeed pitches."

The start of his 2015 campaign was delayed, Assistant GM and VP of Baseball Operations Doug Harris told MASN's Byron Kerr last month, so he and fellow prospect Reynaldo Lopez could remain at the Nationals' training facility in Florida where the Nats could monitor them, "... every step of the way from a physical perspective."

Harris also said that both starters would come close to the same innings totals they reached last season, when the Nationals rested Giolito occasionally to give him the experience of going through a full campaign.

Asked about his goals for his second full season, Giolito said last September that he just wanted to continue to develop as a pitcher regardless of where he started.

"I want to continue to increase my command of the fastball and be able to stay strong and throw even more innings," Giolito said.

The Nationals assigned Giolito to their Class-A Carolina League affiliate earlier this week, and tonight he'll make his first start of the 2015 season for the Potomac Nationals at home in Woodbridge, VA's Pfitzner Stadium where the P-Nats face the Frederick Keys.

FBB Archives: Giolito a no-brainer for Nationals at 16th overall 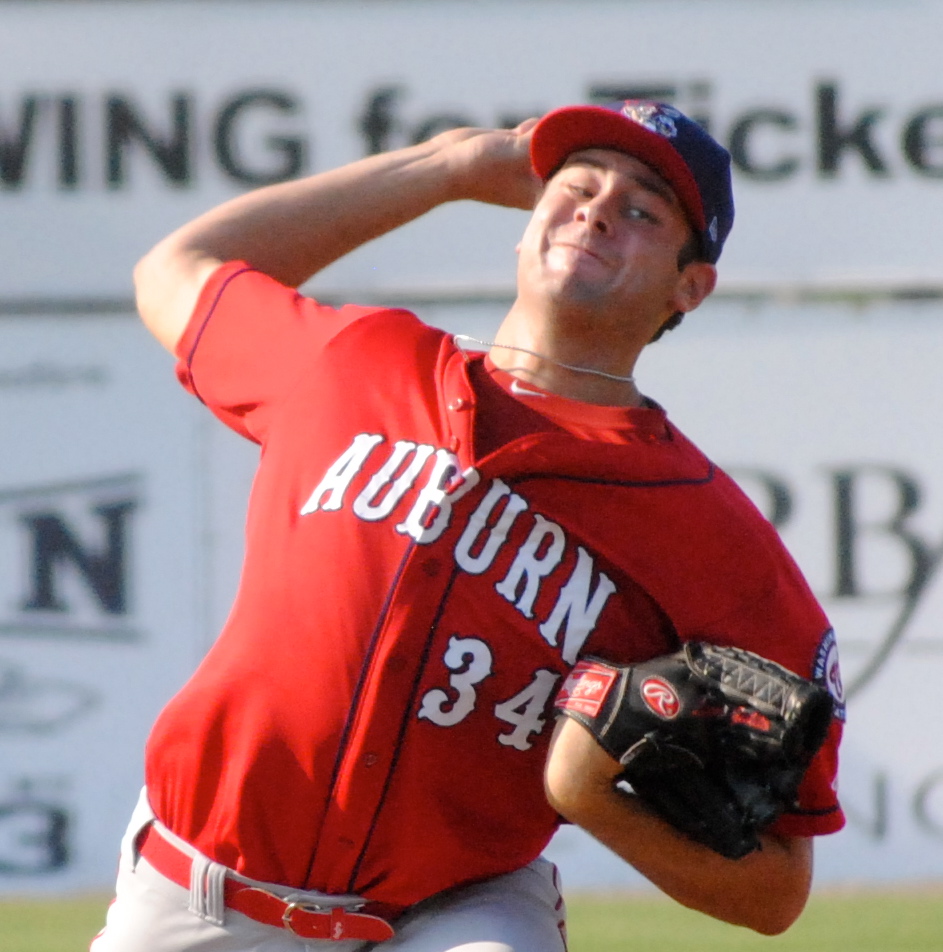 It will be a step up in competition for Giolito, now 20, and another step in his progression as he continues to build up strength in his surgically-repaired right elbow after he underwent Tommy John surgery in late 2012.

Will the decision to hold him back for a month allow the right-hander to remain in the Potomac rotation for the entire season without taking breaks like he did last summer. Wait till the "Strasburg Shutdown" crowd gets wind of that if so...