According to ESPN's Stats & Info Twitter feed, Bryce Harper, who hit two home runs for the Washington Nationals on Friday night after hitting three in Wednesday's game, became the youngest player in MLB history with five HRs in a two-game span.

His 10 HRs on the year are tied with the Cincinnati Reds' Todd Frazier for the lead in the National League with only Seattle Mariners' right fielder Nelson Cruz ahead of the NL leaders with 14 so far.

"Yeah, pretty good," Nats' skipper Matt Williams said tonight, after watching Harper follow a 3-HR game in the series finale with the Miami Marlins on Wednesday with a 2-HR game against the Braves.

"When he gets outside of himself, sometimes it doesn't happen for him, but the last couple of games, he's been exceptional." -Matt Williams on Bryce Harper's 5 HRs in two games

"It's calm and it's quick and he's waiting for the baseball," Williams said. "He's not going to get it. As we spoke about a couple days ago, when he does that he's got the ability to do what he did, hit a ball to left-center, hit a ball to right, and drive them. When he gets outside of himself, sometimes it doesn't happen for him, but the last couple of games, he's been exceptional."

Harper's first homer of the night, and his ninth of the year, was a two-run blast on a 90 mph 1-2 fastball from Braves' lefty Eric Stults that went out to left-center field in Nats Park, over the Kaiser Permante® wall and into the Red Porch seats to put the Nationals up 3-2 in the sixth.

Debuting Braves' right-hander Williams Perez put two on in front of Harper and fed him a 92 mph first-pitch fastball that didn't quite make it outside where catcher A.J. Pierzynski wanted it. Harper's 10th HR of the season ended up sailing over the out-of-town scoreboard in right field for a three-run blast that made it 7-2 Nats in the eighth. It also made history...

Harper downplayed his personal success when he spoke after the game, a 9-2 win in the first of three for the Braves in D.C.

"Like I've been saying, that's the way I need to play," Harper told reporters.

"That's the way this team needs to go about our business every single day. And I've got a lot of great guys around me. Gio [Gonzalez] threw great tonight. Did unbelievable going out there. [Danny Espinosa] hit two home runs also. [Yunel Escobar] swung the bat well. [Jayson Werth] got his first one, that was huge to see.

"So everybody is swinging the bat well, it's nice to see."

But what's different for Harper now? Other than the fact that he hasn't worn batting gloves recently, a trend he told MASN's Dan Kolko he was likely to continue.

"He's seen it good all year. He's leading the league in walks and now he's tied for the league-lead in homers too. That just means that he's calm and he's waiting for the baseball..." -Matt Williams on Bryce Harper's approach

"Worked in high school, worked in college," Harper said. "So, it's working right now, so I'll keep it going, hopefully we keep winning ballgames, keep scoring runs and having some fun."

Both Williams and Harper have talked about Harper's approach at the plate being more "quiet" this season and the fact that Harper is staying back and not "raging" at the ball as Williams put it last month.

Asked about his patient approach, which has also resulted in him taking a major league-leading 26 walks so far in 2015, Harper said, he was, "... just trying to see a lot of pitches."

"If you're walking, if you're seeing more pitches, that makes you more patient, lets you get your pitch and do some damage."

"All of the above," he said. "For me, anyway, it's him starting to understand himself and what he can and can't do. And what works for him and what makes him successful. Of those swings in the last couple of games, I haven't seen one of them that's been out of control. So if he can wait for the baseball, he can see it purer, and he takes a quick easy swing on it, those results can happen for him."

"His lower half is key," Williams continued. 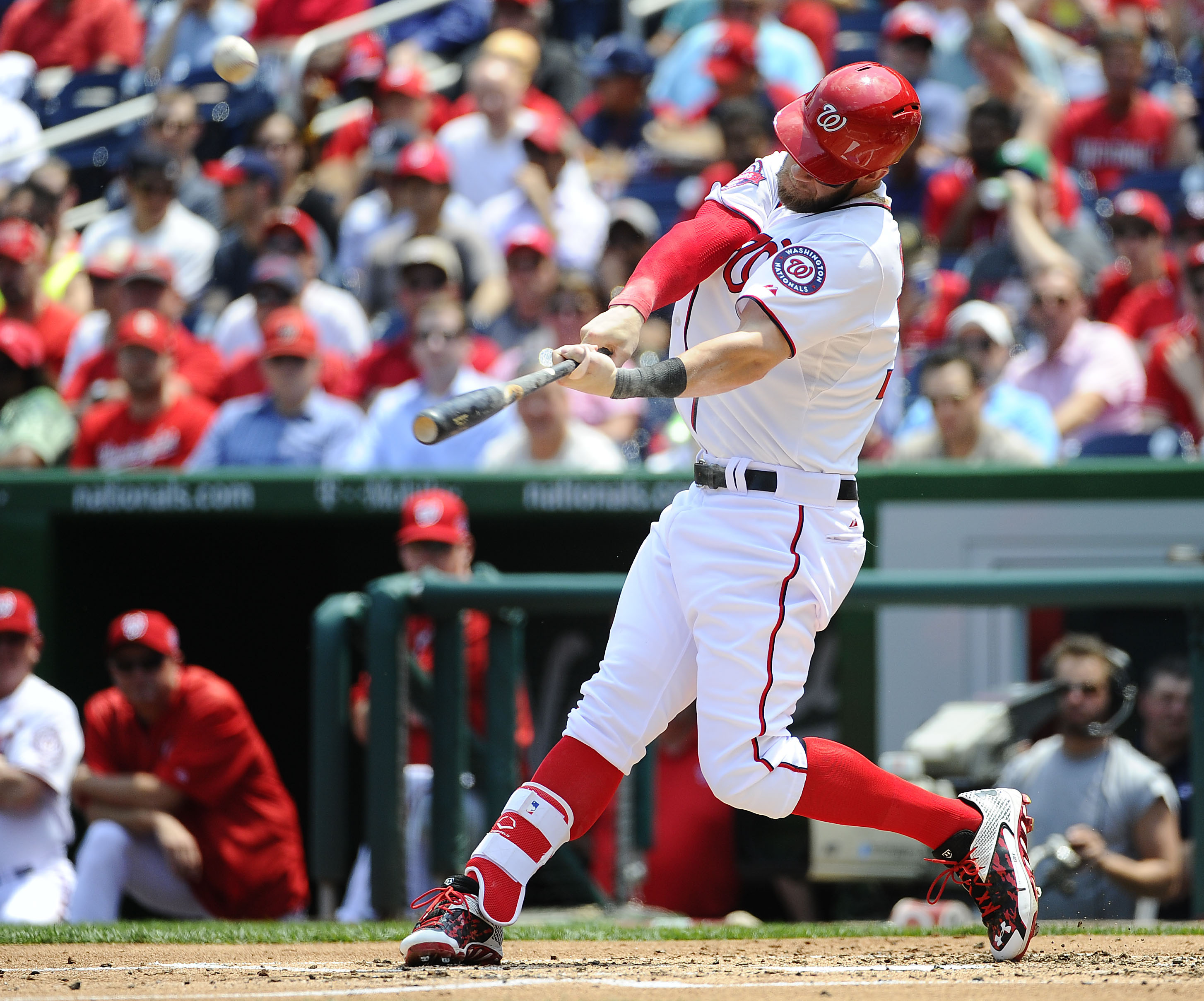 "It's just that he feels good, he's seeing the ball good. He's seen it good all year. He's leading the league in walks and now he's tied for the league-lead in homers too. That just means that he's calm and he's waiting for the baseball and he's simply getting the bat head to it."

"I'm just trying to go up there and trying to have good ABs," Harper said before once again detailing the contributions the rest of his teammates have made.

There's no mistaking who's been leading the team offensively recently, however.

Gio Gonzalez, who got the win for a seven-inning outing against the Braves in which he gave up five hits, a walk and two earned runs while striking out eight batters on 103 pitches, summed it up perfectly when he spoke to reporters:

We talked about Harper's home run parade, Gio Gonzalez's outing and more on the latest edition of Nats Nightly: