Washington Nationals' slugger Bryce Harper beat the Atlanta Braves with a walk-off home run in the ninth inning of this afternoon's game in the nation's capital. Before the game, one of baseball's greatest said Harper's "the real thing."

"He had a lot of hype coming in," Frank Robinson told reporters in Washington, D.C. this afternoon when the 79-year-old, Hall of Famer was asked for his thoughts on 22-year-old Nationals' slugger Bryce Harper, before Harper hit a walk-off home run in the ninth inning of today's game.

It was the third walk-off homer of Harper's career, his NL-leading eleventh home run this season and his sixth home run in the last three games.

Only one player in major league history has more walk-off home runs at Harper's age:

Only the legendary Frank Robinson has more walk-off HR before turning 23 than Bryce Harper. pic.twitter.com/dlD90pSEC4

Robinson, who managed for sixteen years after his twenty-one year playing career in the majors, and spent his last five years on the bench with the franchise in Montreal (2002-2004) and then Washington, (2005-2006) was in the nation's capital for the Nats' "Frank Robinson Day" festivities and the unveiling of his name on Nationals Park's "Ring of Honor."

"I remember reading a lot about him and couldn't wait to see him," Robinson continued, returning to Harper.

"It took him a couple years to really get his feet on the ground. I think he now understands the pitchers in the league, what they're trying to do to him and [made] some adjustments." -Frank Robinson on Bryce Harper before today's game

"It took him a couple years to really get his feet on the ground. I think he now understands the pitchers in the league, what they're trying to do to him and [made] some adjustments. He's the real thing. I think you're gonna see a lot of exciting things out of this this young man for a lot of years."

Matt Williams has had a front row seat to witness Harper's development for the last two seasons, and he saw his share of talented hitters throughout the course of his own 17-year career in the majors.

"You know I had the privilege to hit behind [Barry Bonds] for four years, so, yeah," Williams said after the Nationals' 8-6 win over the Atlanta Braves.

"But nonetheless, it's really good. He's taking what they give him. Today he hit a single the other way on a pitch kind of down and off the plate and then got, I think it was an offspeed pitch to hit in the last inning there.

"But he's doing everything well right now. He's playing great defense. He made a great play today on [Nick] Markakis and a couple of sliding plays and of course the game-winner, so he's playing well."

"Playing well" is, of course, an understatement. Harper sent a flyout to center in his first at bat on Saturday afternoon; took his Major League-leading 27th walk the second time up; lined an opposite field single to left in the fifth before scoring on Ryan Zimmerman's three-run home run; made an inning-ending catch on the Markakis' liner to right in the seventh as Williams mentioned; then after striking out in the Nats' seventh against right-handed reliever Brandon Cunniff, took righty Cody Martin deep in the ninth inning for the walk-off winner.

So, Williams was asked, is he finally the player he was expected to be?

"I don't know if it's finally," Williams said. "He's still 22. I mean, that's the perception a little bit, right? Finally? But he's 22 years old and just 22, so I think he's starting to learn himself. He's learning how to play within himself.

"He's learning how to, as I said, take what's given to him.

"He's taken to right field very well, taken to hitting in the middle of the order very well. We certainly don't expect him to hit a home run every day, but he can get in streaks like that where he's seeing the ball really well and putting the head on it. And so, from a maturation standpoint, yes, he's getting there, he's taking those steps necessary."

After dealing with a knee issue which followed his run-ins with outfield walls in Atlanta and Los Angeles in 2013 and the torn ulnar-collateral ligament in his left thumb last season, Harper came into the 2015 campaign 100% health for really the first time in two years.

"And if you miss significant time then there's a process to coming back regardless of when you get back to the big leagues, to find the stroke and to feel comfortable again. So, he came into Spring Training feeling good and has not stopped."

Though they held him in the park for eight innings, the Braves ultimately couldn't stop Harper from hitting his sixth home run in the last three games.

Nats 8-6 over Braves on Harper walk-off 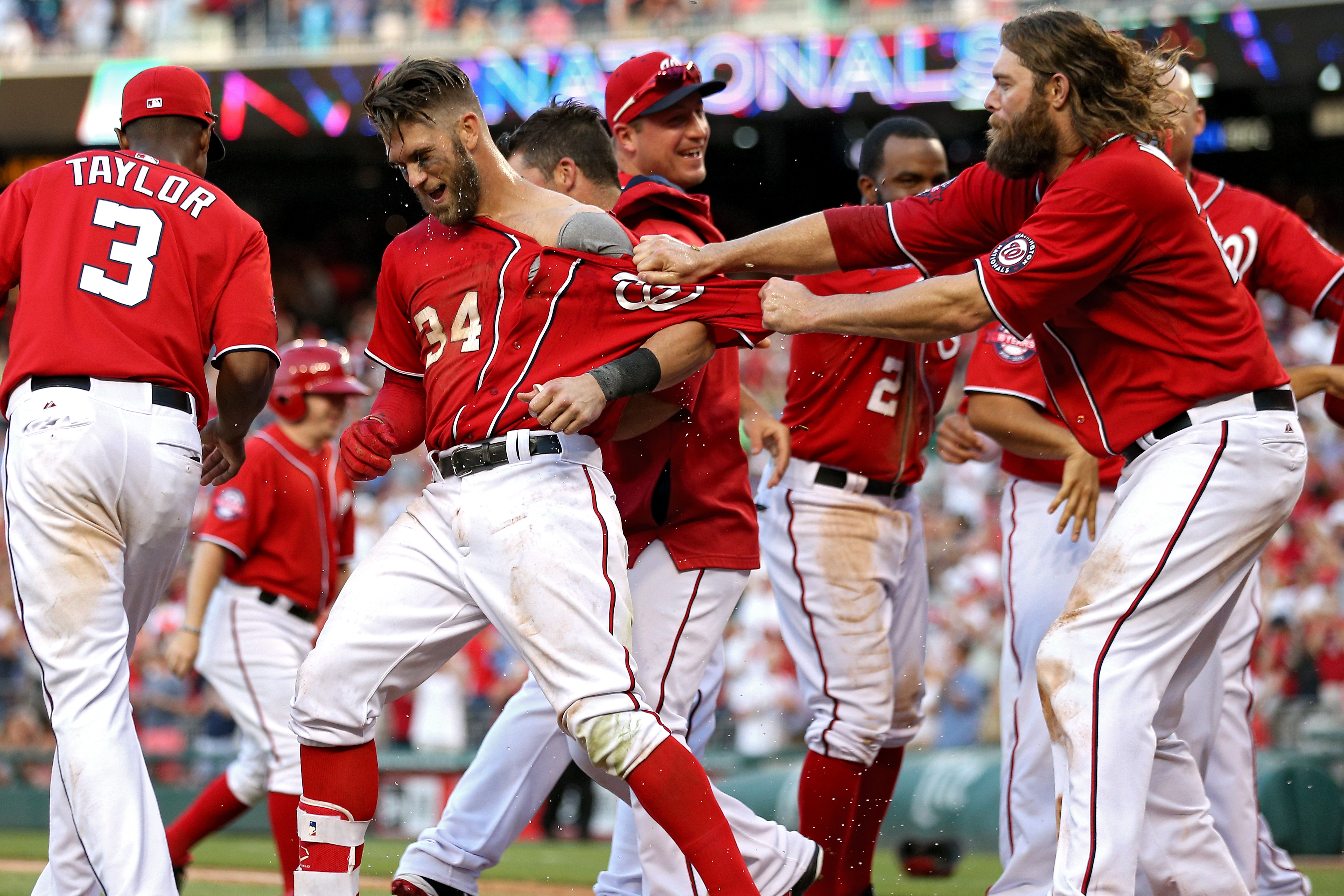 "The Braves always battle," Harper told MASN's Dan Kolko on the field in Nationals Park after the game.

"They're a great team. We were just better today. Being able to come in here and win this ball game -- [Doug] Fister threw great. The lineup, I mean, Zim getting a homer, a three-run shot."

But it was Harper who came through with the winner, on a low 1-0 slider from Martin that was a little too far out over the middle.

"Just trying to get a pitch over the plate," Harper said. "I think that last pitch was a slider or a curveball, I knew he had a heater, but just try to look for something over the plate and end the ballgame."

"That's the type of player I need to be," he continued. "That's what I need to be like, that's how I need to play and the fans expect that, I expect that out of myself."

The baseball world is starting to expect it out of him too.