Nationals' lefty Gio Gonzalez not himself on mound vs Rays

"Gio was just not himself today," Washington Nationals' manager Matt Williams said after Gio Gonzalez went just 3 1/3 innings against the Tampa Bay Rays, giving up five runs in what ended up a 6-1 loss in Tropicana Field.

Share All sharing options for: Nationals' lefty Gio Gonzalez not himself on mound vs Rays

Of the twenty-two Tampa Bay Rays he faced in 3 ⅓ innings on Monday night in Tropicana Field, Washington left-hander Gio Gonzalez threw first pitch strikes to just nine. Only 44 of the 79 pitches he threw were strikes.

He got four ground ball outs and five fly ball outs, but 11 of the 22 hitters reached base and five of them scored, putting the Washington Nationals behind 5-0 before manager Matt Williams went to the bullpen for Taylor Hill.

Gonzalez's strike zone plot, as provided by Brooksbaseball.net, is not pretty:

"'Wasn’t being aggressive. When I was falling behind and trying to get back in the strike zone, they were putting the ball in play."

"He just couldn't throw it where he wanted to throw it," Nats' skipper Matt Williams said after the Nationals' 6-1 loss to the Rays.

"Just everything was up. Everything was middle when he did throw it over the plate. Didn't hit any corners. Ball wasn't down." -Matt Williams on Gio Gonzalez vs Tampa Bay

"Got behind hitters, lost command of the strike zone, just didn't have any command at all today. We're going to have to work on that."

Tampa Bay loaded the bases in three of the four innings Gonzalez was on the mound.

The veteran southpaw worked his way out of a bases-loaded two-out jam in a 24-pitch, 12-strike bottom of the first, gave up a one-out double, stolen base and sac fly in an 11-pitch, seven-strike second and allowed three straight singles and a run to start the Rays' third, and a base-loading walk and sac fly in the at bats that followed, putting the Nationals down 3-0 after a 23-pitch, 11-strike frame.

The Rays loaded the bases again in the fourth, with singles around a HBP, and a sac fly and RBI grounder through the left side made it 5-0 before Williams took the ball from Gonzalez, ending the 29-year-old starter's shortest start this season 21 pitches into the fourth (14 strikes).

"Just everything was up," Williams said. "Everything was middle when he did throw it over the plate. Didn't hit any corners. Ball wasn't down. So we'll get him in the bullpen, and work on that, get on top of the baseball a little bit better."

"I just think that he didn't have feel for any of them," Williams said when asked about Gonzalez not being able to adjust on the fly as he had in previous outings.

"Curveballs were down in the dirt. First inning, he threw some fastballs in to the right-handers, but after that he just couldn't command."

Williams was asked if he thought Gonzalez would need to skip a start to sort things out?

Gonzalez talked between his last trip to the mound and Monday's outing about using his two-seam fastball to induce more ground balls from hitters, telling reporters, including Washington Post writer James Wagner, "'Strikeouts are very nice, don’t get me wrong. But then again, so are groundball outs and double plays.'"

Rays 6-1 over Nationals: Nats come out flat in TB 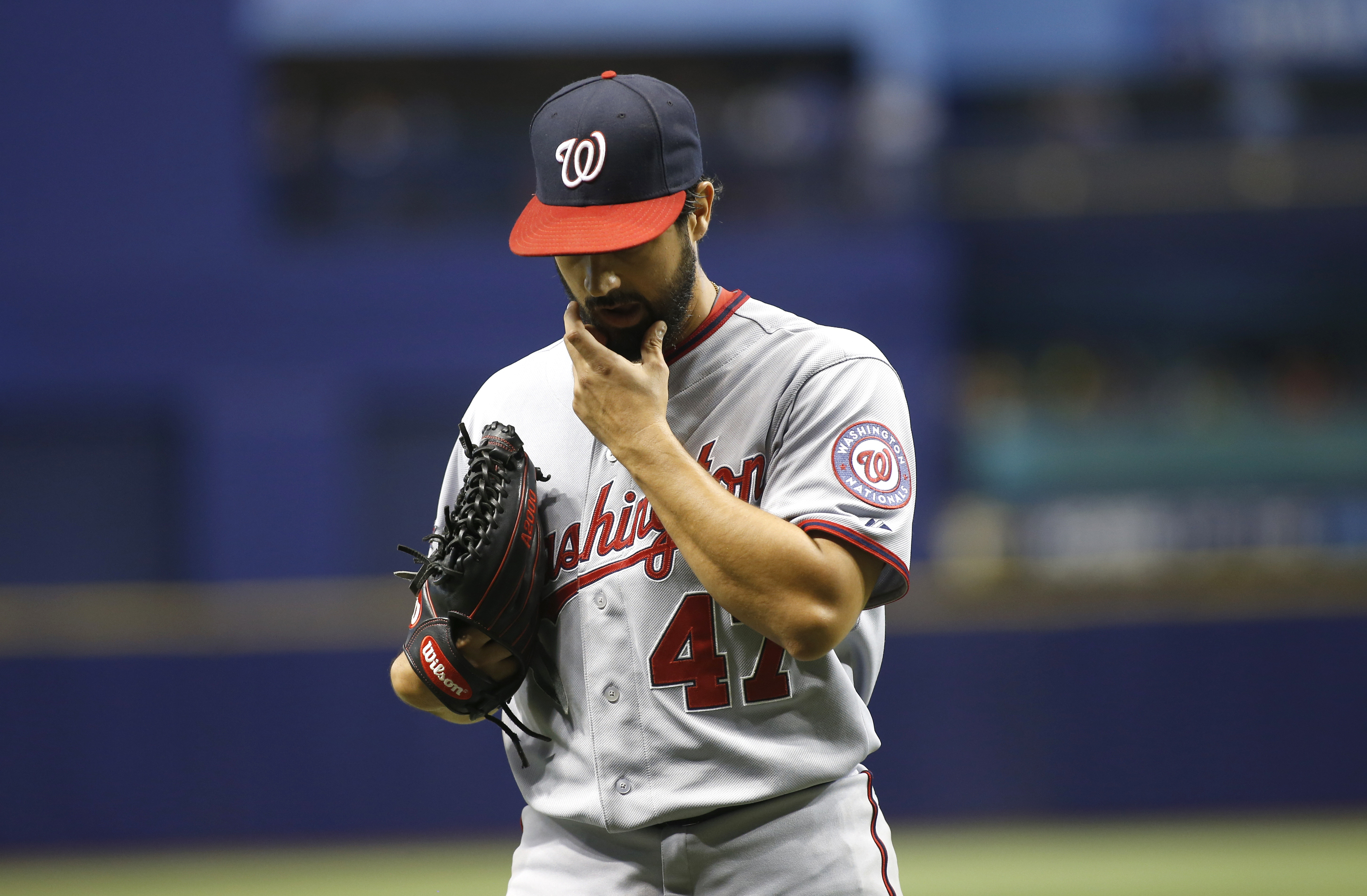 Gonzalez threw predominantly two-seamers again, 46 total, 26 for strikes, got swings and misses with just four and nine were put in play, for five of the eight hits he allowed.

"You put the ball in play and things can happen for you," Williams said. "Gio was just not himself today and so we'll work on that and see if we can get them tomorrow."