The Washington Nationals connected for 23 hits, three doubles, four home runs and 16 runs total in a 16-4 win over the Tampa Bay Rays in the second game of two in Tropicana Field, but that game is over now, turn the page like Matt Williams says.

Share All sharing options for: Nationals set Nats' record for hits in a game with 23 in 16-4 win over Rays

You have to hand it to Washington Nationals' manager Matt Williams. He might have a future in the nation's capital. Two years in, he's as practiced as any politician at staying on message.

After watching the Nationals match their run total for the previous four games while connecting for a franchise-best 23 hits (2005-present) in their 16-4 win over the Tampa Bay Rays, Williams was asked if he thought the momentum might carry over and help the Nats, who've lost nine of the last fifteen games turn things around? He repeated what he's said repeatedly this season.

"We talk about momentum all the time. There's momentum within a game, but game-to-game it doesn't matter." -Matt Williams on whether big night can carry over

To paraphrase: There's momentum within a game, but it doesn't carry over. As soon as one game ends, it's in the past.

"We talk about momentum all the time," the second-year skipper told reporters when asked about all the scoring. "There's momentum within a game, but game-to-game it doesn't matter. So, tonight we were patient when we knew we had to be and we got in situations and delivered, so that's good, we need to continue to do that."

Nationals' starter Tanner Roark, who earned his third win of the season with a seven-inning, 112-pitch effort, was a little more open to the idea that the Nats' big win might help to turn things around.

"It's a lot of fun," Roark told reporters. "To see these guys come out and just hit the ball all over the place and score runs, it's uplifting for everybody in the clubhouse and just keep it going."

Of the Nationals' 23 hits, just three were doubles, and they hit four home runs total, with Wilson Ramos hitting two.

Rays' starter Alex Colome was out after just two innings in which he gave up seven hits, three walks and six earned runs.

"Espi, Clint, Harper, I mean everybody contributed tonight," Williams said. "Good defense. All in all a good win for us." -Matt Williams on the Nats big win over the Rays

Reliever Brandon Gomes was the only Tampa Bay pitcher who escaped unscathed, the other four "pitchers" who took the mound all gave up runs.

Clint Robinson in the second, and Bryce Harper in the fifth, hit tape-measure homers in Tropicana Field that drew oohs and aahs from those in attendance.

Williams wasn't having it. Sure the Nationals scored some runs and hit some balls absurdly far, but as he's often said before, home runs will come, but a good approach is more important and will lead to sustained success.

"Harp got a breaking ball," Williams said, referring to the pitch Harper hit out to center and onto the net above the devil ray tank. Robinson hit one into the rafters in right that no one saw land.

"Clint got ahead in the count and got a fastball to hit. For me, the homers are great, but Harp's AB against the second lefty [Enny Romero] who throws extremely hard was a good one, the ball that went off the first baseman's glove and Clint's as well. They hung in there against a lefty that throws really hard and got base hits, I'm impressed with that."

Nothing can shock the "Big Marine", or knock him off message. He's seen it all in his career in the game. How about two position players pitching in one game?

"No, I've never seen that," Williams said. Finally. But then he empathized. "It's difficult when -- we've experienced that unfortunately -- where the starter gets out early and you have to do that sometimes. The good thing for us is that regardless of situation we stuck with it. Guys kept their approach, they kept swinging, getting good pitches to hit, so that's a good sign." Oh, he's good. 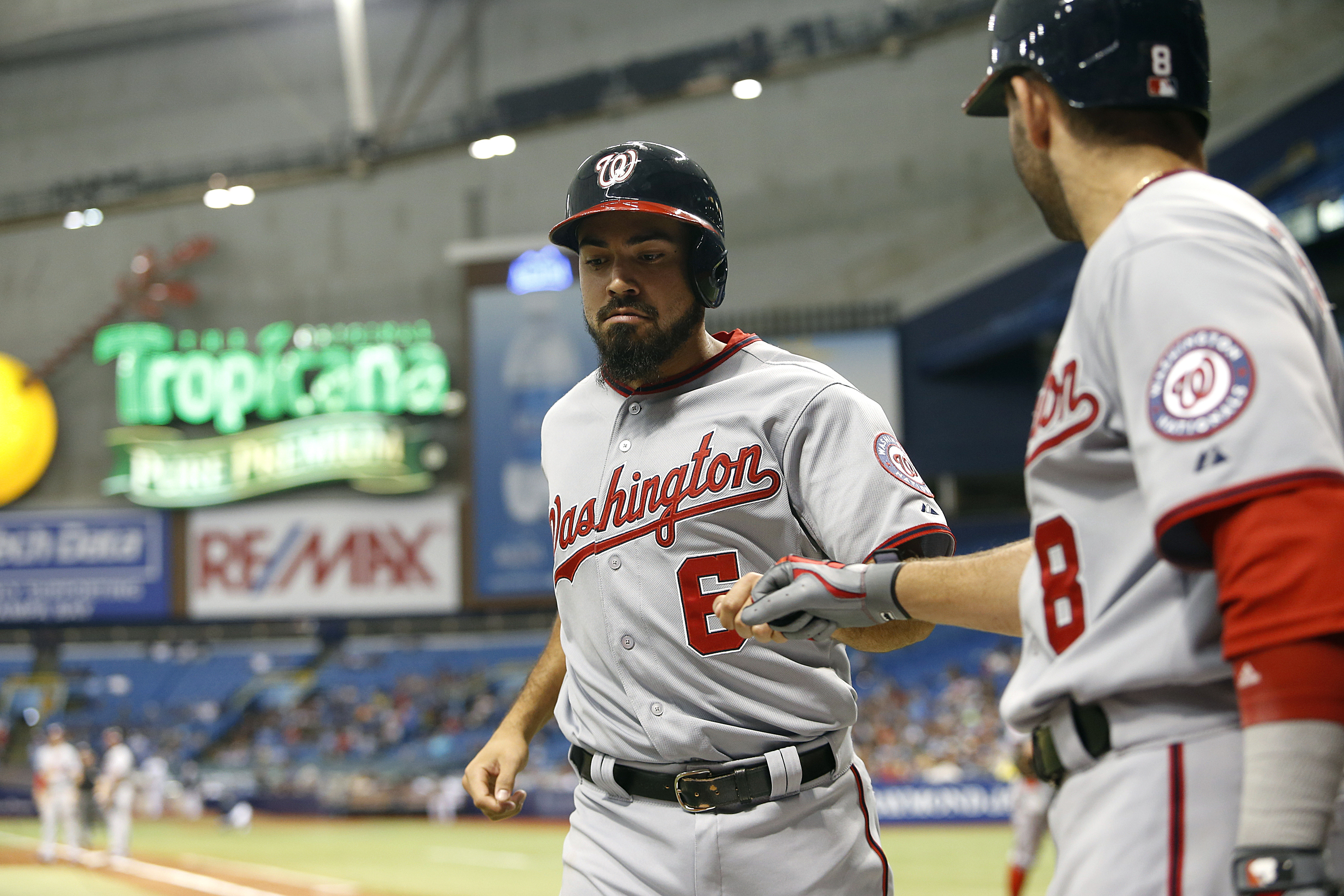 "Espi, Clint, Harper, I mean everybody contributed tonight," Williams said. "Good defense. All in all a good win for us."

And a nice way to end a three-city, eight-game road trip on which the Nationals went 4-4. Now they head home for two more with the Rays as part of an eight-game homestand in Nationals Park where the Nats are 16-12 this season, as opposed to 18-19 away from D.C. after Tuesday's win.