Jordan Zimmermann and the Nationals vs the Rays' bullpen

Matt Williams said the Tampa Bay Rays' unique approach in what they described as a "bullpen day" in Nationals Park was not to blame for the Washington Nationals' lack of offense a night after an offensive explosion in Florida.

Share All sharing options for: Jordan Zimmermann and the Nationals vs the Rays' bullpen

Coming off a 3 ⅓-inning, nine-hit, six-run outing against the Milwaukee Brewers on the road in Miller Park, just about anything short of a disastrous one or two-inning blow-up would have been an improvement, but Jordan Zimmermann put together a solid performance in Wednesday night's 5-0 loss to the Tampa Bay Rays.

The Nats' offense? Not so much. After the game, in which the Nationals managed just two hits total against a parade of Rays' relievers, manager Matt Williams refused to blame the Tampa Bay's unique-ish approach to eating up a game's worth of innings for the fact that Washington's hitters came up empty a day after a 23-hit, 16-run performance at the Trop.

"We have scouting reports and information just like everybody else has, so it's about getting a good pitch and doing something with it. They did that tonight..." -Matt Williams on facing Rays' reliever parade in D.C.

"I mean, we've got as much video as you could possibly want," Williams said.

"We have scouting reports and information just like everybody else has, so it's about getting a good pitch and doing something with it. They did that tonight against [Zimmermann]. They got a couple of pitches out, over and [Steven] Souza hit one and their catcher [Curt Casali] hit one and so that's sometimes the formula for winning.

"Other times it's bunching base hits together like we did yesterday. So it doesn't affect how we approach it other than we have all those reports available to us prior, during and after the game."

Williams was asked if he was surprised by the fact that an offense that was humming and connecting with everything a night before could go so cold?

"It happens," he said. "I mean, if I had the formula, if anybody had that formula, we'd certainly do something about it. We'd love to get 23 hits every day, score a bunch of runs. Unfortunately, the way baseball is, that doesn't happen. So that's why we play 162, that's why there is another one tomorrow and we have to be ready for that.

"So there is no formula for it. I wish I had it, but I don't have the answer to that question other than you never know what might happen tomorrow and maybe another 23 [hits]. You never know."

Zimmermann's outing, at least is a positive to take away from a rain-soaked, disappointing loss.

Over seven innings on the mound in Nationals Park, he struck out eight, walked just one batter and gave up eight hits and three earned runs, two on the home runs by Souza and Casali and one when a run scored on an error by Ian Desmond at short on what could have been an inning-ending double play.

"Back down in the strike zone. He had some low strikes, some swing and misses on his slider, so, as compared to the last time out, yeah, much better." -Matt Williams on Jordan Zimmermann vs the Rays

"Back down in the strike zone," Williams said. "He had some low strikes, some swing and misses on his slider, so, as compared to the last time out, yeah, much better."

"I thought it was good," Zimmermann told reporters.

"A couple of solo home runs, I can live with that. Just two mistakes to those two guys that are powerful guys that are gonna make you pay. I fell behind 3-1 to the catcher there and I went with the fastball, usually I go with the slider and I made a mistake and he got the bat on the ball."

Souza, who, of course, made the no-hitter saving catch for Zimmermann last September before he was dealt to the Rays this winter, got hold of a 1-1 slider over the middle of the plate and hit it into the back of the bullpen in left.

It was the 26-year-old slugger's 13th home run of the season.

"He's got good power, he's got speed, does a lot of things well on the diamond," his former manager said.

"And he's getting an opportunity to play every day and show them what he's got over there. Tonight he got a breaking ball that's out, over and up and when he connects with it he can hit it a long way. He's got good power to the middle of the diamond and power the other way as well."

Zimmermann said that even though he was facing a friend and former teammate, the approach was, obviously, the same as with any other hitter.

"I mean, obviously I want to get him out," he explained. "Couldn't do it tonight. First at bat he gets a base hit and the second at bat I hang a slider and he makes me pay. 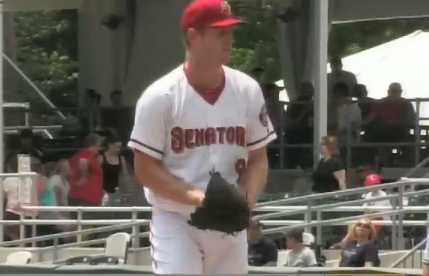 "He's a good hitter. He's still really, really young, and he's probably going to turn into a really good ball player. But obviously if you make mistakes they make you pay at this level and he did tonight."

"Just getting back out there and throwing the ball," he said.

"Milwaukee was just -- I mean, it was terrible. I was all over the place, couldn't command anything. Tonight was a lot better, slider was really, really good, and fastball command was right where I wanted it."