Bryce Harper was worried initially, but said he felt better when he talked to a doctor after suffering what's been diagnosed as a "mild left hamstring" strain. Harper slipped on the outfield grass in Nationals Park while trying to make a throw home...

With runners on first and second and one out in the sixth inning of tonight's matchup with Tampa Bay in Washington, D.C.'s Nationals Park, former Nats and current Rays' infielder Asdrubal Cabrera hit a single to right field on a ground ball that rolled through the wet outfield grass to where a charging Bryce Harper met it, coming in at full speed.

Harper picked it up on the run, determined to try for an out at home, but slipped on the grass and sailed the throw before falling awkwardly to the ground clutching his left leg.

"I came up throwing and it was really slippery out there from the rain," Harper told reporters after the game.

"My right knee gave out and I put all my pressure on the left knee and got my hamstring, lower hamstring, into the knee, a little bit.

"I came up throwing and it was really slippery out there from the rain. My right knee gave out and I put all my pressure on the left knee and got my hamstring, lower hamstring, into the knee, a little bit." -Bryce Harper on injuring hamstring in tonight's loss

"But I mean, it didn't feel very good. Was in pretty good pain. A little scared at the same time because I could feel it a little bit more on the lower half of it, but we'll see how I am tomorrow and go from there."

Two runs scored on the play, putting the Rays ahead 4-3 in what ended up being a 5-3 loss. After the game, Nats' skipper Matt Williams addressed the media and shared the initial diagnosis.

"He's got a mild left hamstring strain," Williams said. "So we'll see how it is tomorrow. It's mild, but he strained it a little bit."

Asked if Harper had undergone any tests, Williams said, "Not yet, no."

"No, it's not to that point," Harper said when asked if he thought an MRI would be necessary.

"I've never really had a problem with hamstring or anything like that," Harper explained.

"I don't think it would have been a problem if I didn't slip, so being that wet surface played a big part in that and bummer it happened."

"Conditions are conditions," Williams said. "It's unfortunate that it happened, but we've got a game to play tomorrow, so we have to go try to win that one." -Matt Williams on wet grass leading to Harper's injury

"Conditions are conditions," Williams said. "It's unfortunate that it happened, but we've got a game to play tomorrow, so we have to go try to win that one."

Williams, team trainer Lee Kuntz and Harper's teammates gathered around him in the outfield after the play, trying to determine what happened.

"We just asked him where he was hurting," Williams told reporters. "Lee was out there with him as well and examined him. The discomfort was in his left hamstring. So got him out of the game, we'll evaluate again tomorrow."

Harper said the diagnosis made him feel a little bit better after his initial fears.

"With the way it felt, I've had problems with my left knee before, I've had surgery on it, so it was definitely really scary, it didn't feel all that great when I was laying there. Pretty scary, but talked to the doc a little bit, to get what he thought, and then see how it felt. I'm very happy with what it feels like." 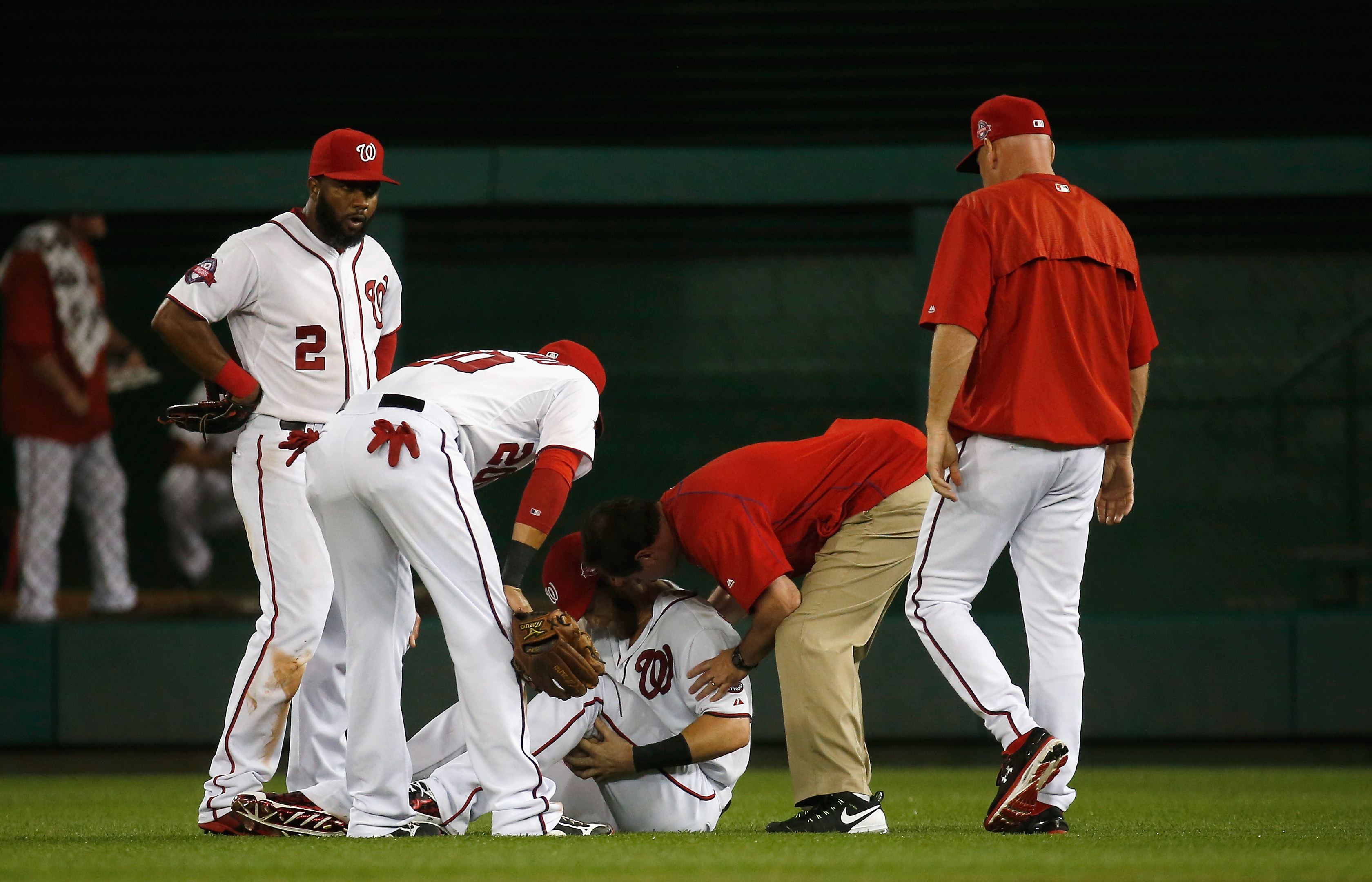 "I'm just going to see how it feels tomorrow," he said when asked about the plan going forward.

"Be smart about it, of course. It's still early, so just try to be as smart as I can. I want to be in there, but if it don't feel right tomorrow then maybe taking that day off might help me a little bit, but we'll see how it feels."

Williams talked about how the team reacted and tried to stay focused after seeing Harper go down.

• We talked about Harper's injury, Doug Fister's return and more on the latest edition of Nats Nightly: