Jordan Zimmermann threw eight scoreless vs the Toronto Blue Jays today and Drew Storen closed out the ninth in a 2-0 win in Washington, D.C.'s Nationals Park in which the Nats handed the Jays their first shutout loss of the season.

Share All sharing options for: Nationals' Jordan Zimmermann helps shut Blue Jays out for the first time in 2015

Jordan Zimmermann was only in real trouble once this afternoon in the first game of the Washington Nationals' split doubleheader with the Toronto Blue Jays in Nationals Park. With the Nats up 2-0 in the top of the seventh, Blue Jays' outfielder Chris Colabello and catcher Josh Thole hit back-to-back singles to start the frame and were bunted into scoring position by center fielder Ezequiel Carrera.

Blue Jays' skipper John Gibbons went to his bench for pinch hitter Edwin Encarnacion with runners at second and third with one out, but Zimmermann carefully pitched around the hard-hitting, but struggling slugger to get to the next batter, pinch hitter Russell Martin, who sent an 0-1 fastball out to second base to start an inning-and-threat-ending 4-6-3 DP.

"I started him with a slider hoping he would be anxious on the fastball and roll it over to [Ian Desmond] and he took it. "I came back with a fastball in and I was able to jam him and get the ground ball." -Jordan Zimmermann on approach vs Russell Martin

"I started him with a slider hoping he would be anxious on the fastball and roll it over to [Ian Desmond] and he took it," Zimmermann told reporters after going on to complete eight scoreless in the Nationals' 2-0 win.

"I came back with a fastball in and I was able to jam him and get the ground ball."

The Nationals' 29-year-old right-hander stretched his unbeaten streak to seven straight outings and he shut down a Toronto offense that began the day with more runs scored than any team in the majors this season, shutting the Blue Jays out for the first time in 53 games.

The key to keeping the Blue Jays off the board, Zimmermann explained, was shutting down their leadoff hitter.

"The biggest thing was keep [Jose] Reyes off the [bases]," Zimmermann said. "Those guys in the middle aren't going to hurt you if Reyes isn't on base, and I was able to do that tonight and I felt good from the beginning. Seventh inning I was in a little trouble, but I was able to get the ground ball and get out of it."

"They swing it," Nats' skipper Matt Williams said, "and he kept Reyes off and kept their middle order guys off-balance too, some flyouts and some swings on balls kind of up in the zone and for fly balls.

"The ball's not carrying today because it's so wet and damp, so he did a really nice job."

Asked about his consistency over the last month-plus after a shaky first few outings this year, Zimmermann said it was all about sorting out his mechanics and getting everything in line.

"I've been feeling good,' Zimmermann said. "I was a little off in the beginning and everything is working now and right where I want to be."

What changed after his early-season struggles?

"Just staying on line," he explained. "Early on, like I said, I was flying open and the ball was sinking and running and didn't have very good control and now I'm more on line and staying though the target." 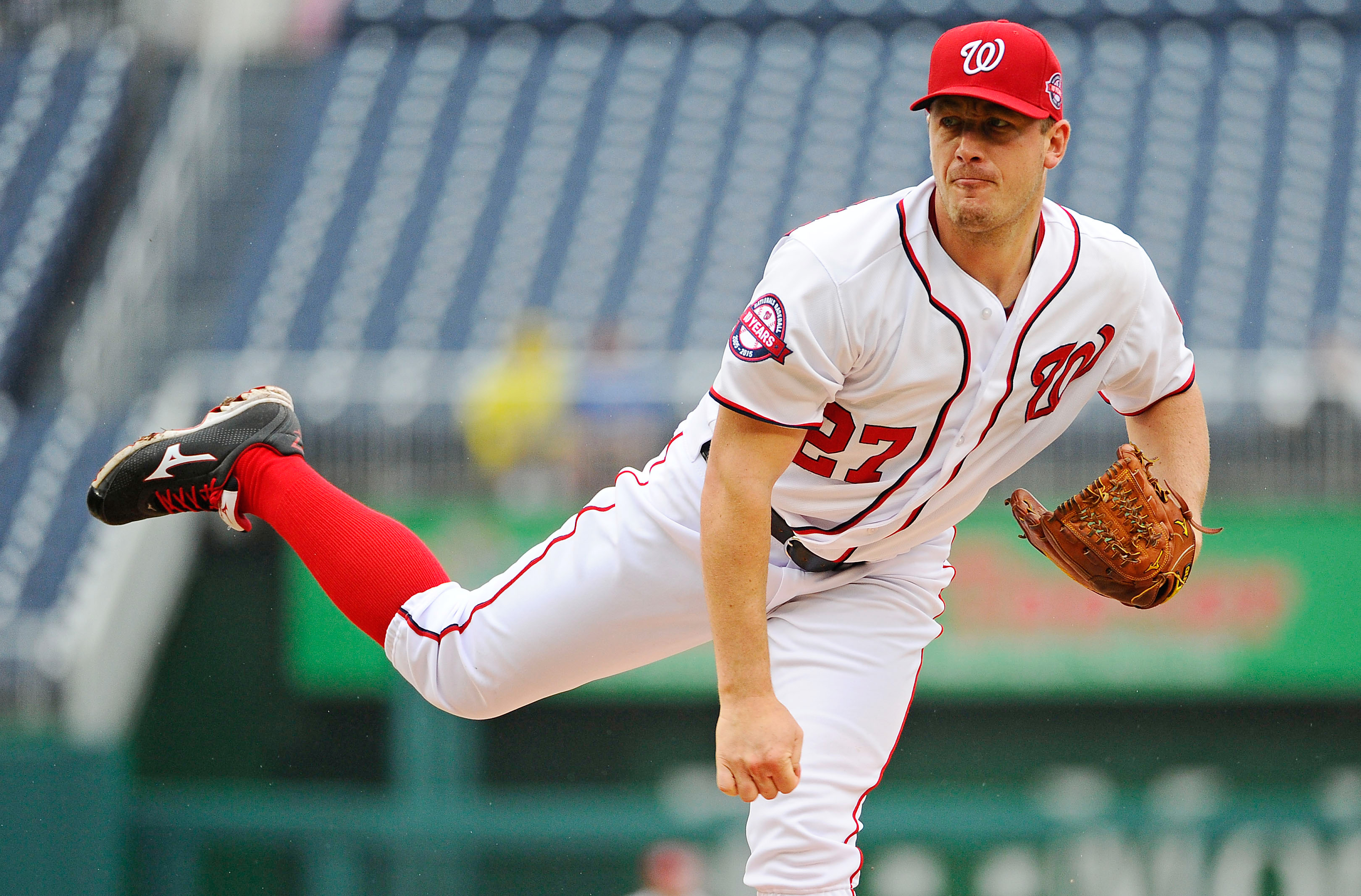 "He was in command from the first pitch," Williams said. "Throwing it where he wanted to. Early on he was keeping his pitch count down, which allowed him to go deeper too. So, I don't know where he ended up, 105? That's really good for eight innings."

The Nats played in front of sparse crowd in a game that was rescheduled for this afternoon following Monday night's postponement, but he said he's pitched in similar situations before that prepared him for a quiet ballpark.

"I've had it before," Zimmermann said. "My debut when it rained all day and I was able to go out there and hear [Nats radio announcers] Dave [Jageler] and Charlie [Slowes] in the background talking. So, I was ready for it."