Washington Nationals' starter Max Scherzer lost a perfect game with two out in the ninth but completed a no-hitter one batter later. After the game, Scherzer and Nats' skipper Matt Williams talked about what the pitcher accomplished.

Max Scherzer talked, after having a bid for a perfect game broken up in the first at bat of the seventh inning last Sunday in Milwaukee's Miller Park, about the heater he threw Brewers' slugger Carlos Gomez on the one hit he surrendered and the difficulty of keeping a major league lineup hitless.

"I was not letting up on that fastball. He was able to get a good swing on it and kept a level plane through it and was able to get it in there. So, you take some luck to be able to throw a no-hitter or perfect game, this proves that."

"My last two starts, this is some of the best baseball that I've thrown. The best pitching I've done. I just feel like I'm executing with all my pitches. I just continue to keep getting better. -Max Scherzer on 16 K, CG/SO and no-hitter in consecutive starts

Six days later, Washington's 30-year-old starter took a perfect game into the ninth inning on Saturday afternoon in the nation's capital, retiring the first 26 Pittsburgh batters he faced before he hit pinch hitter Jose Tabata on the left elbow with a 2-2 slider on his 103rd pitch of the game.

Tabata clearly leaned into it, lowering his elbow to meet the pitch that Scherzer would later say he lost.

Scherzer remained focused, however, and retired Pirates' leadoff man Josh Harrison on a fly to left that completed a no-hitter that set off a chocolate syrup and Gatorade filled celebration on the field as the 41,104 fans in attendance erupted after hanging on every pitch throughout the final innings of the historic outing.

So what were Scherzer's first thoughts after completing his first and the Nationals' second no-hitter?

"Mission accomplished," he told reporters. "Just feeling like it's a great team win. I just felt like [Wilson Ramos] and I were on the same page again, just had a good game plan. I was just battling. It was pretty exhausting out there. It was nice and hot and humid. Going through the first six innings was pretty tiring and exhausting just mentally. I just kept firing -- just pounding the zone and then the offense showed up there in the sixth inning. [Denard] Span was able to reach base, [Anthony] Rendon was able to hit a double and the inning just continued and guys just stepped up to the plate and did their job. I just felt like that helped give me a break, give me some time to recuperate, sit in the clubhouse in some air conditioning, kind of rest up and then I felt strong. I felt like I could get out there and come with my best fastball for the last three innings and was just able to keep executing my pitches and was able to get it done."

The four-run sixth inning Scherzer was describing blew the game open, giving the Nationals a 5-0 lead after Bryce Harper's 23rd home run of the season put them up 1-0 after four.

Combined with his complete game shutout of the Brewers, Scherzer was up to eighteen scoreless innings overall by the time he was done with the Pirates, a dominant stretch he said was one of the best of his career.

"My last two starts, this is some of the best baseball that I've thrown," Scherzer said. "The best pitching I've done. I just feel like I'm executing with all my pitches. I just continue to keep getting better. And it just shows you hard work pays off."

"We had great plays today. Michael Taylor some great plays in left. Danny Espinosa with that great play to get [Pedro Alvarez]. I just felt like it was a great team win." -Max Scherzer on the help he got in his no-hitter

The hard work, he explained, started in the humidity in Florida this Spring, when he began preparing to pitch on days like he encountered today in D.C., where it was 90+° and muggy.

"It's little stuff like that to get your body ready to be able to make this start and be able to compete all the way through," he said.

"We had great plays today. Michael Taylor some great plays in left. Danny Espinosa with that great play to get [Pedro Alvarez]. I just felt like it was a great team win."

Taylor made a leaping grab at the wall in left field in the third, on what was at least an extra-base hit by Jordy Mercer if the Nats' outfielder wasn't able to track it.

Espinosa's play came with two down in the eighth when Alvarez grounded into the shift, by a diving Anthony Rendon to where Espinosa was backing Rendon up in short right.

"When it was off the bat, I thought it was just a routine out and then I looked up and saw how the shift was played and I realized there was going to be some time to get it," Scherzer said.

"I know usually in that shift that you have time, even when you play that deep that you usually have time and I knew that if he got to it and threw it you can get him by a step and sure enough -- obviously that's stuff we practice, having the shift and being able to get to that ball and be able to collect that out, so that's just a great play. That goes to the early work, that goes to Espi working hard -- you have to realize what he's being asked to do right now. He's being asked to play left, first, short, second and for him to be able to make that play just shows you how much hard work he's putting into his game."

Espinosa's play ended the eighth, and Scherzer got help from Anthony Rendon on a pop to foul territory off third and Span on a line drive to center for the first two outs of the ninth before his bid for perfection ended with the slider that hit Tabata.

Scherzer was asked after the game how long it took for him to refocus after the HBP and how he was able to move on and get to work retiring Harrison.

"Pretty easy to do," he said. "Probably took two seconds. I realized I lost the perfect game, just move on, finish this thing out." -Max Scherzer on moving on after HBP to complete no-no

"Pretty easy to do," he said. "Probably took two seconds. I realized I lost the perfect game, just move on, finish this thing out."

Nationals' manager Matt Williams said he never even considered challenging the HBP, and declined to offer his take on whether or not Tabata leaned in.

"I think that's irrelevant at this point," Williams explained. "The last thing I'm going to do is walk on the field and mess up Max's rhythm. That would be a crying shame. I ain't doing that."

"He hit him with the baseball," Williams said. "It's difficult when that happens, but he settled back in and got the last guy out, which shows his mental fortitude that he was able to make a pitch and get the last guy for the no-hitter."

Scherzer, even after he lost the perfect game in the seventh against the Brewers, said he never allowed himself, for even a second, to worry about potentially giving up a hit and losing another one today.

"The only focus in these situations is 'What are you going to do next?' The next batter, next pitch. The moment you have a negative thought and it's going to happen."

Williams talked about the last few minutes before it ended, and the feeling of watching Scherzer lock it down.

"I know there was -- what's the max capacity here? -- 41,000 people on their feet from the time he went out for the ninth. That's a very good feeling for our club. Max was fantastic all day."

Once it was over? Scherzer said it was a feeling he couldn't explain. 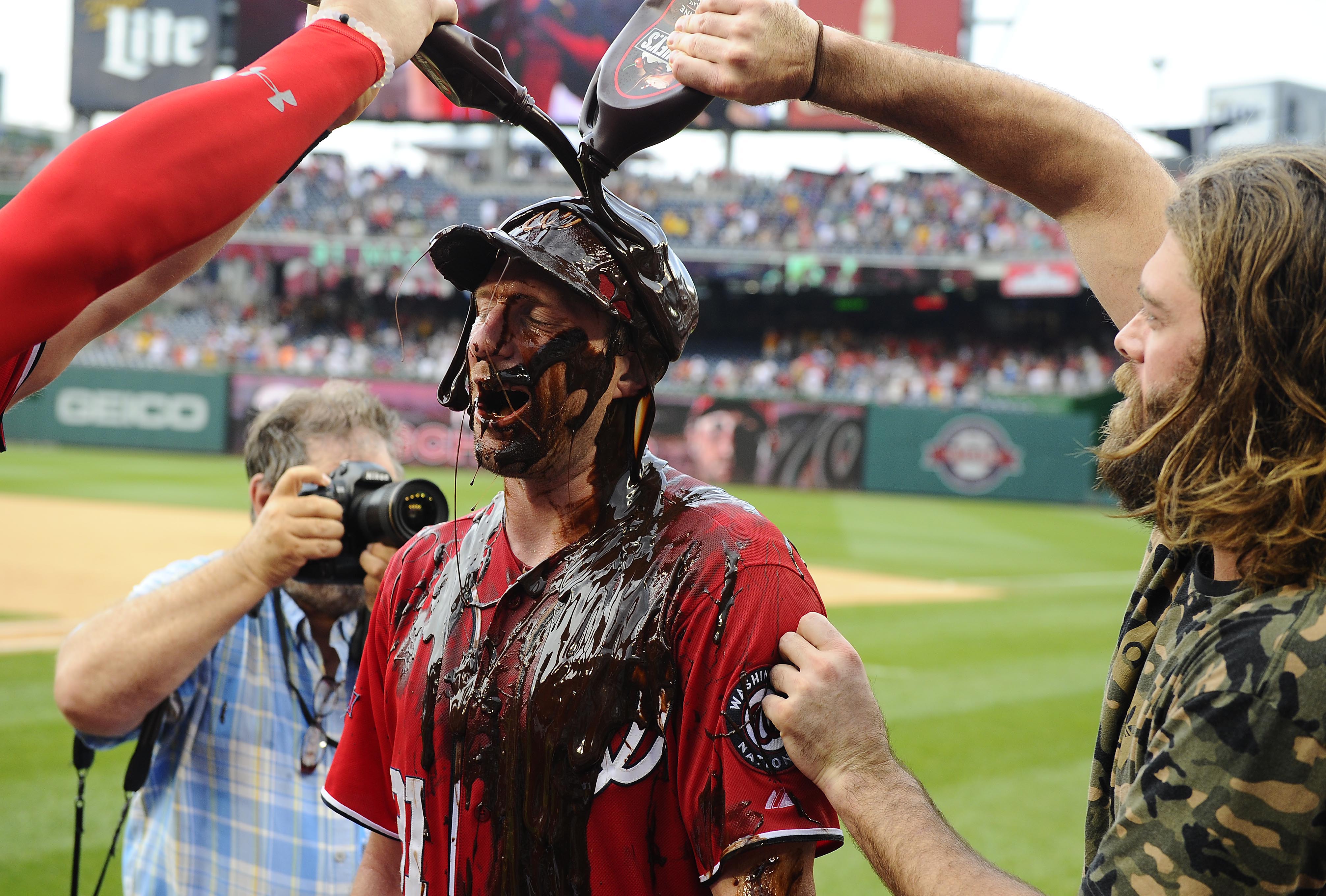 "When you can celebrate with your teammates on just a major accomplishment, there's nothing better.

"When everybody wants to celebrate with you and dump the Gatorade, pour the chocolate syrup. How many bottles of chocolate syrup did we have? I felt like I got like three bottles?"

"Six bottles. Good God! I thought it was three. So I had six bottles of chocolate syrup all over me. That's just a great feeling. I can't describe it. It's a cloud nine moment."

An even better moment? The one a second later in his post-no-hitter press conference when another reporter said he'd probably be the first player to have a chocolate-covered jersey and cap in Cooperstown.

"That's awesome," Scherzer said. "It just shows you how much fun we're having as a team. That's the stuff that... it brings us together and when you have it together as a team, there's nothing better."