"In the ninth stage the seeker reaches the point when all his acts are unselfish, done without desire." - Martin Luther King, Jr. on the ninth stage of ten in the of the progress of the Bodhisattva toward enlightenment. Also known as "cloud nine".

Share All sharing options for: "Cloud nine" - Max Scherzer on his no-hitter vs the Pirates in Nationals Park

Fifty-nine of the 106 pitches Max Scherzer threw to the Pittsburgh Pirates in Saturday's no-hitter in Nationals Park were fastballs. He averaged 94.7 mph with his four-seamer, dialed it up to 97.7 mph and threw it for strikes 81.4% of the time.

"They were very aggressive today," Scherzer told reporters after it was over. "I know they're a great fastball hitting team. Really when you look, throughout the first time through the order, they were swinging, they were very aggressive, at fastball and slider, so I think there was only maybe two guys that didn't swing first pitch, so I could tell their game plan and I was going to force their hand into their game plan so even though I knew they were going to be aggressive, I wanted to keep them aggressive and keep them hunting heaters and I wanted them to do that."

Washington's 30-year-old ace mixed in 12 changeups, 24 sliders -- including the one that hit Pirates' pinch hitter Jose Tabata with two out in the ninth to wreck Scherzer's bid for perfection -- and 11 curves, but it was mostly his fastball.

He had no fear. Scherzer challenged hitter after hitter and won.

"They were very aggressive early," Nationals' manager Matt Williams said after the game.

"Swinging at first pitches, first-pitch fastballs especially. And that allowed Max to stay fresh, because going into the ninth inning he still was under a hundred pitches. So it allows him to stay fresh and continue to reach back when he needs it."

Scherzer struck out ten batters, induced four groundouts and got seven fly ball outs, including the last one, a fly to left off Josh Harrison's bat that Michael Taylor caught for out no.27 from the 28 batters the Nats' right-hander faced.

It wasn't perfect, but Max Scherzer completed the second no-hitter by a Nationals' pitcher in a year following Jordan Zimmermann's no-no in the season finale last summer and the fourth in D.C. baseball history after Walter Johnson in 1920 and Bobby Burke in 1931.

The key to Scherzer's success on Saturday?

"Command in the zone, command out of the zone. Throwing it where he needs to to get strikes, and then climbing the ladder, expanding when he needs to as well." -Matt Williams on the keys to Max Scherzer's success

"Command in the zone, command out of the zone. Throwing it where he needs to to get strikes, and then climbing the ladder, expanding when he needs to as well. We saw a lot of that in the last two starts that he's had. As a hitter you stand up there and you know he's going to throw strikes, and it's easy to get in swing mode and he's able to expand laterally and vertical when he needs to as well. It's a little of both. Command is throwing strikes and not throwing strikes when you need to as well."

"I think I kind of said it after the Milwaukee start, after the second inning I could feel I was sharp," he said.

"And that's when I can continue to keep firing, pounding the zone with all my pitches and execute the pitches the way I wanted. Today, they were pretty aggressive so I knew it was going to be difficult, I think once I got through the lineup the first time in the third, once I knew I got through their aggressive part, I could tell they were being aggressive, I got through it with early fastballs, I didn't give up a single at that point, and I almost gave up a home run to [Jordy] Mercer, so that was another great play by [Michael Taylor], so once I got through that, I knew I could then start going through the rest of my arsenal and start really trying to figure out what adjustments we needed to make the second time through the order to try to collect outs in a different way.

"I realized that if I continued to throw it that hard I wasn't going to be able to get an out or I was going to continue to throw balls, and so I had to just throttle down back to 99%, and try to execute pitches..." -Max Scherzer on remaining in control in the 9th

"And then obviously after the sixth, once I got some rest, I knew I could come with everything I've got for those last three innings and I just knew I was going to have my best fastball for the rest."

Williams was asked when he started to seriously believe his starter might be on the way to making history.

"Any time you run through the lineup a couple times without giving up a hit you think that there may be a chance," he said. "But how many times have we seen a blooper or a ball get through. Danny [Espinonsa] made a nice play on [Pedro] Alvarez's ball [in the eighth]. Stacked the right side of the infield there because we know he's likely to pull that baseball and [Espinosa] had to come get it hard and make an accurate throw. So all around good plays. Anthony [Rendon] going over to the dugout to make the first out of the ninth. Important plays for him."

Espinosa's play ended the eighth inning. Scherzer came back out for the ninth and popped Gregory Polanco up in foul territory off third where Rendon made a catch up against the dugout railing. Mercer lined out to center for out no.2 and then Scherzer's bid for perfection ended with the slider that hit Jose Tabata's left elbow.

Tabata leaned into it and took his base, but Scherzer stayed focused and three pitches later got the fly to left from Harrison that completed his no-hitter.

His thoughts throughout that tense ninth inning?

"I just felt great," Scherzer said. "I knew my arm felt great, felt strong. I knew I could come with my best fastball, so I was ready to be aggressive, ready to take it to them and I was able to execute pitches. With Tabata, he was really battling me. I was putting some good fastballs there up in the zone and he was able to just foul them off, and that's pretty much all I had. I think it was a 1-2 fastball that I threw that I tried to absolutely throw everything into it.

"I missed up, and I realized that if I continued to throw it that hard I wasn't going to be able to get an out or I was going to continue to throw balls, and so I had to just throttle down back to 99%, and try to execute pitches and unfortunately got to 2-2, I know slider is the right pitch, I could have gone changeup as well, but the slider just kind of slipped -- not slipped -- but I just didn't finish the pitch and it backed up on me and clipped him.

Did Jose Tabata cheat Max Scherzer out of perfection? 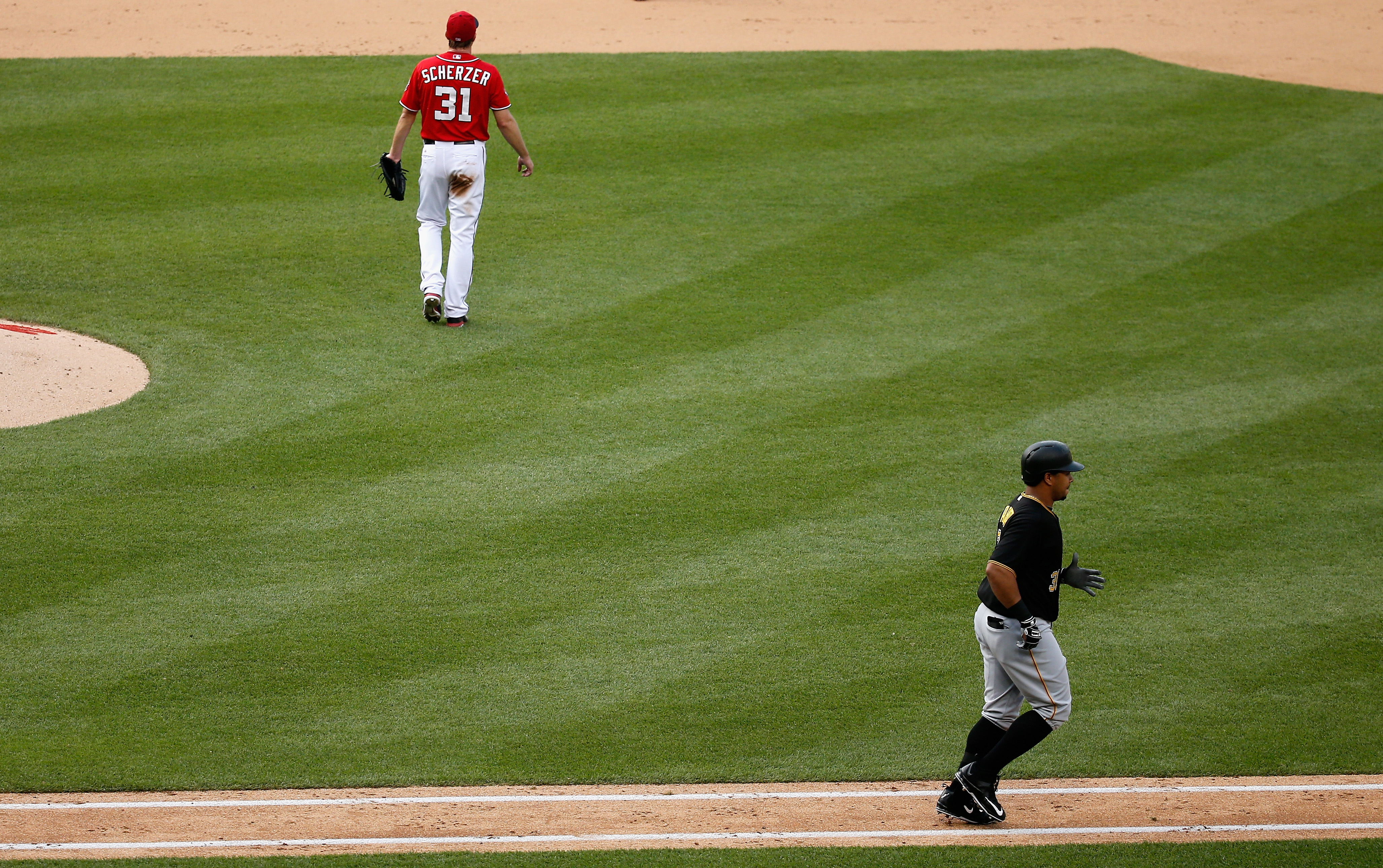 "It's just one of things that happened. You just focus on what you can do next, just move on to the next hitter and just go right after Harrison and do everything you can do and just pound him with fastballs and I was able to collect that final out."

"Cloud nine," Scherzer said. "When you can celebrate with your teammates on just a major accomplishment, there's nothing better. When everybody wants to celebrate with you and dump the Gatorade, pour the chocolate syrup. How many bottles of chocolate syrup did we have? I felt like I got like three bottles? Six bottles. Good God! I thought it was three. So I had six bottles of chocolate syrup all over me. That's just a great feeling. I can't describe it. It's a cloud nine moment."

WOW!! What a day! Unreal moment to get the chocolate sauce again! #ImOnCloud9 pic.twitter.com/YGWIUyn7h5