After a no-hitter last Saturday, Washington Nationals' starter Max Scherzer took a perfect game into the sixth inning last night in Citizens Bank Park in what ended up a 5-2 win over the Philadelphia Phillies. Scherzer earned his 100th career win.

There was a walk by Brewers' second baseman Scooter Gennett, and the perfect-game-ending hit-by-pitch on Jose Tabata over that stretch, but no hits from fifty-four straight batters over twelve days and three starts.

After the walk to Gennett two Sundays back, Scherzer has now faced sixty-two straight batters without allowing a walk.

"Was pounding the zone. Again, another outing with no walks. That's what you pride yourself on, just attacking the zone. Defense made some good plays..." -Max Scherzer on start vs the Phillies in CBP

That was a point of pride for the Nationals' right-hander when he spoke to reporters after last night's win over the Phillies, which saw him take another bid for perfection into the sixth.

"I felt good," Scherzer said after the outing against the Nats' NL East rivals, in which he earned his 100th major league win.

"Was pounding the zone. Again, another outing with no walks. That's what you pride yourself on, just attacking the zone. Defense made some good plays, and I was just in sync with [Wilson Ramos] again."

Jose Lobaton was behind the plate for Scherzer's start against the Brewers. Ramos worked with Scherzer in each of his last two outings.

"We have a plan and we're going out there and just executing it. And when you get in sync with your catcher and they have a good feel for what you're doing it's two minds against one, and that's a good thing."

"He was good again," Nationals' manager Matt Williams said after the Nationals' 5-2 win.

Williams was asked if he was thinking no-hitter again as Scherzer piled up outs.

"We don't think in those terms," Williams said, "just one out at a time. "But he was pitching good.

"Changeup was really effective tonight. Threw some good curveballs tonight, more curveballs and sliders tonight, so just shows you that he can go out there and adjust..." -Matt Williams on Max Scherzer vs the Phillies

"Changeup was really effective tonight. Threw some good curveballs tonight, more curveballs and sliders tonight, so just shows you that he can go out there and adjust depending on what he feels like he's got."

Scherzer admitted that the thought that he might be doing something special again did cross his mind.

"A little bit," he said. "Like I said, once you can get through the order first time through you've got something going and then obviously there you start piecing it together and I had something working, but it's just so hard. It takes luck and you've just got to be [on point] and when you make mistakes they've got to mishit it and I made a few mistakes early and they hit some balls hard and fortunately they were right at people, but then obviously I hung a curveball and Galvis was able to hit a mistake. It's just one of those things that break it up."

One inning later, pinch hitter Ben Revere hit a solo home run off of Scherzer for the second of two runs he allowed on the night.

Over his last three outings, Scherzer has now given up six hits, two earned runs and one walk while striking out 33 batters and holding opposing hitters from the Brewers, Pirates and Phillies to a combined .071/.093/.143 line.

"It's just complete comfort, dominance, throwing the ball where he wants to throw it," Williams said.

"Fifty-four batters between hits is pretty good. He got his 100th win tonight and he's prepared and he competes. He got a base hit, went to second on a ball in the dirt. All of those things contribute to him winning a ballgame."

So, a reporter wondered, does it almost feel automatic for him when he takes the mound?

"Oh God, no," Scherzer said. "Those guys are good. This is tough. Now you're in divisional opponents, and now they're getting a look after you and the margin for error just shrinks even more, and so for me it's just going and executing all of your pitches now becomes a premium.

"I was able to do that for the most part tonight and keep them at bay." 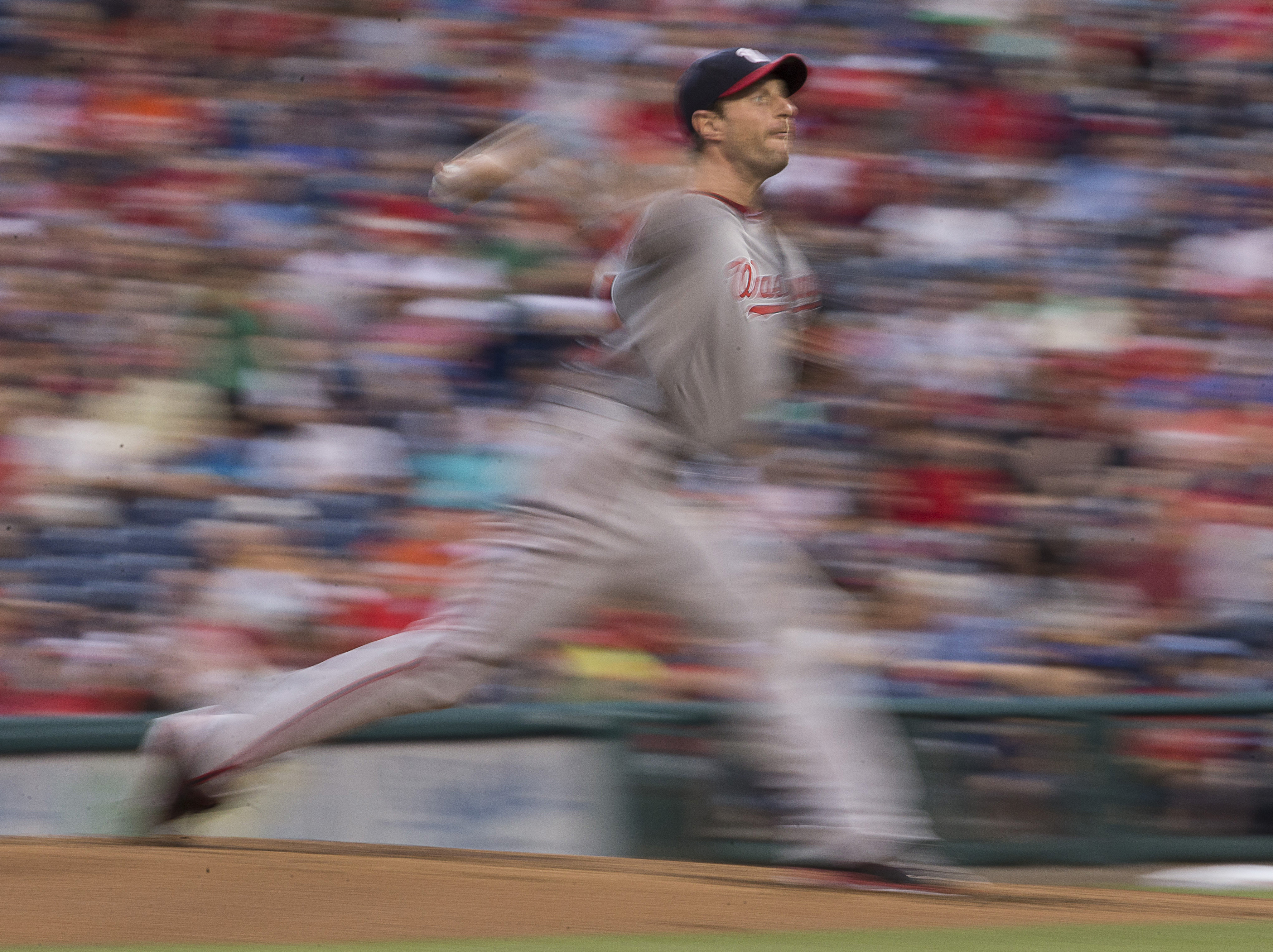 "We know that in this game nothing is automatic," Williams told reporters, "but like I said, he's got a plan.

"He understands the opposition. [Fourth time] facing them this year, so he's seen them all. He's got an idea on how to get them out, and he was effective again tonight."

"He comes right after you," Phillies' interim manager Pete Mackanin said. "He's very aggressive and he throws all of his pitches for strikes, no matter if it's hard or soft or breaks or doesn't break, he throws everything for strikes so it's tough to sit on one pitch, and then when you do sit on one pitch, if it's not in the location you're sitting on, he's tough. That's why he's as successful as he is."

• We talked about Scherzer's dominance, the Nationals' win streak and more on Nats Nightly after last night's game: