2015 MLB Draft: Nationals don't have first-round pick, but they'll get one

Share All sharing options for: 2015 MLB Draft: Nationals don't have first-round pick, but they'll get one

The Washington Nationals don't have a first-round pick in next week's 2015 MLB Draft, having surrendered the 27th pick when they signed Max Scherzer to a 7-year/$210M free agent deal this winter. Their top pick next Monday, when the Draft begins, will be at no.58 overall. As now-former Asst. GM Roy Clark said when the Nationals gave up their 2013 first-round selection after signing Rafael Soriano, however, current Assistant General Manager and Vice President of Scouting Operations, Kris Kline, told MLB.com's Bill Ladson that they're okay with giving up the top pick considering what they got in Scherzer.

"Any time you have a player to be named later, you pick from a list that you have written down, it's in the Commisioner's Office, it's an agreed-upon list..." -Mike Rizzo on PTNBL in Souza deal on MLB Network Radio

Though they won't have a first-round pick for the second time in three years, they will be getting a first-rounder in the near-future, when the Player to be Named Later from this winter's three-team trade with the San Diego Padres and Tampa Bay Rays finally comes over from the Padres' organization.

The Nats have, thus far, avoided saying his name.

General Manager Mike Rizzo talked this winter about how the whole PTBNL process works after the deal that sent Steven Souza and minor league pitcher Travis Ott to Tampa Bay and brought right-handed starter Joe Ross and the unnamed player widely reported to be 2014 Padres' first-round pick Trea Turner back from San Diego.

"Any time you have a player to be named later," Rizzo told MLB Network Radio hosts Jim Bowden and Jim Duquette in an interview this winter, "you pick from a list that you have written down, it's in the Commisioner's Office, it's an agreed-upon list and then at the time that the player to be named later becomes a part of the trade, you pick from that list. And we're going to follow that protocol and do the same."

As for the idea of a prospect/minor leaguer spending time in another team's system while waiting for him to actually be included as the PTBNL, which in Turner's case, is a year after he signed with the Padres following his selection with the 13th overall pick in last June's Draft, Rizzo said it did involve a lot of trust that the other organization will be responsible with the player in question.

"Any time you have a player or a group of players that are going to be playing in another organization," he explained, "you certainly have to trust the organization to do right by the player and we feel good about that aspect of the player to be named later part of the trade."

So the Nationals don't have a first-round pick, but they will be getting one shortly after the draft. He signed on June 13th last year, so he'll be available to be transferred in ten days.

As for what the Nationals will do with their top pick this year, at no.58 overall? Kline told MLB.com's Ladson that they are focused somewhat on position players.

Can Nats find another gem with top pick at no.58? 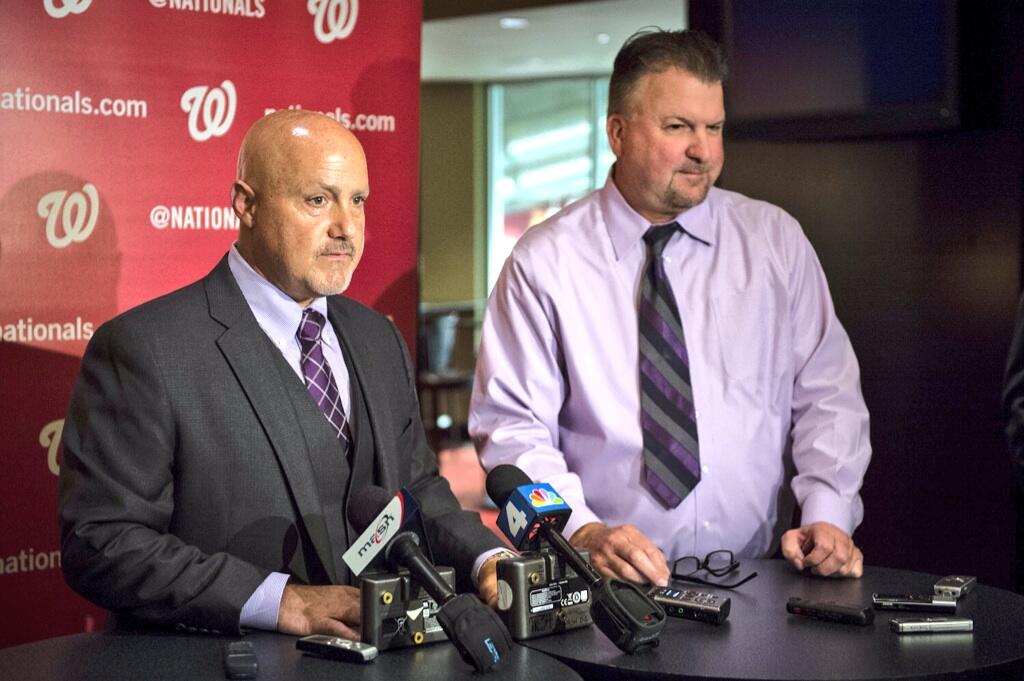 "'If we have a need in the system, it would be some position players, particularly left-handed power that is missing in the system,'" Kline said.

A completely random guess because we have no idea how to predict what Washington will do with the 58th overall pick?

Any chance the Nationals go back to the well for Skye Bolt? The Nats drafted the now-21-year-old, left-handed hitting outfielder in the 26th Round of the 2012 Draft, but he didn't sign, going to North Carolina instead, where he's put up a .259/.383/.449 line with nine doubles and 10 HRs in 56 games this season. MLB.com has Bolt listed at no.67 on their list of the Top 100 prospects for this year's draft...