Before he gave up four runs on four hits in the first inning last night in Turner Field in the series opener against the Washington Nationals, Atlanta Braves' right-hander Shelby Miller had allowed just one earned run total in the first innings of his previous 15 starts this season.

A week ago in the nation's capital, the 24-year-old former St. Louis Cardinals' first-round pick held the Nationals off the board through six before they scraped together a run, taking advantage of a leadoff walk and a broken-bat blooper in what was until that point a scoreless pitchers' duel between Miller and Jordan Zimmermann.

"It just wasn't a normal Shelby Miller outing. Shoot, he's allowed to have that every once in a while with how good he's been..." -Fredi Gonzalez on Shelby Miller's lost to the Nats in Atlanta

Shelby Miller took the mound in Turner Field on Tuesday night with the third-lowest ERA in the majors, at 1.94, and the fifth-lowest batting average against, .200. Miller, the Braves' pregame notes mentioned, was the first Braves' pitcher since the franchise moved to Atlanta in 1966 to post a sub-2.00 ERA over his first 15 starts.

A leadoff single by Denard Span and an RBI double to left-center by Danny Espinosa put the Nationals ahead 1-0 early, however, and Wilson Ramos hit a two-out RBI single to bring Espinosa in before Clint Robinson's two-run home run brought Ramos home as well for a 4-0 lead at the end of a 28-pitch first by Miller.

"He's stingy," Nats' skipper Matt Williams told reporters after what ended up a 6-1 win. "He's really stingy. Denard led off, Danny stayed on a ball nice to left-center field and then Clint got a 3-2 breaking ball that he got enough of to get over the fence and it's nice to do that in the first inning against anybody, but especially somebody as good as Shelby because he's very stingy the later the game goes."

The Nationals scored a run on a double play grounder off Ramos' bat in the third for a 5-0 lead and cruised to a 6-1 win, connecting for eight hits and five runs, four earned off Miller, who walked three and struck out 10 in five innings of work.

"Last time out he was eight innings of scoreless, so again, just command off all of his pitches, working quickly and throwing strikes." -Matt Williams on Jordan Zimmermann vs the Braves

"Shoot, he's allowed to have that every once in a while with how good he's been," Gonzalez added, "and so now we go on to his next start."

Jordan Zimmermann, on the other hand, put together another dominant outing after holding the Braves scoreless through eight strong last week in Washington. Zimmermann gave up six hits in 7 ⅔ scoreless last night in Atlanta, striking out six batters before he was done for the night, having earned his sixth win of the season and lowered his ERA to 3.16 after 99 ⅔ IP.

"You look at (5-5) record with a 3.00 ERA," Gonzalez said, "and I snuggled up next to [Kevin Seitzer] and I said, 'Who's getting this guy?' because we haven't seen him and we've got some pretty good hitters. But he pitches tough, career, you hate to even look at some of those numbers, but you've got left-handers this year hitting him, so we put five left-handers in the lineup and he dominates those guys."

Nationals 6-1 over Braves for 9th straight over Atlanta 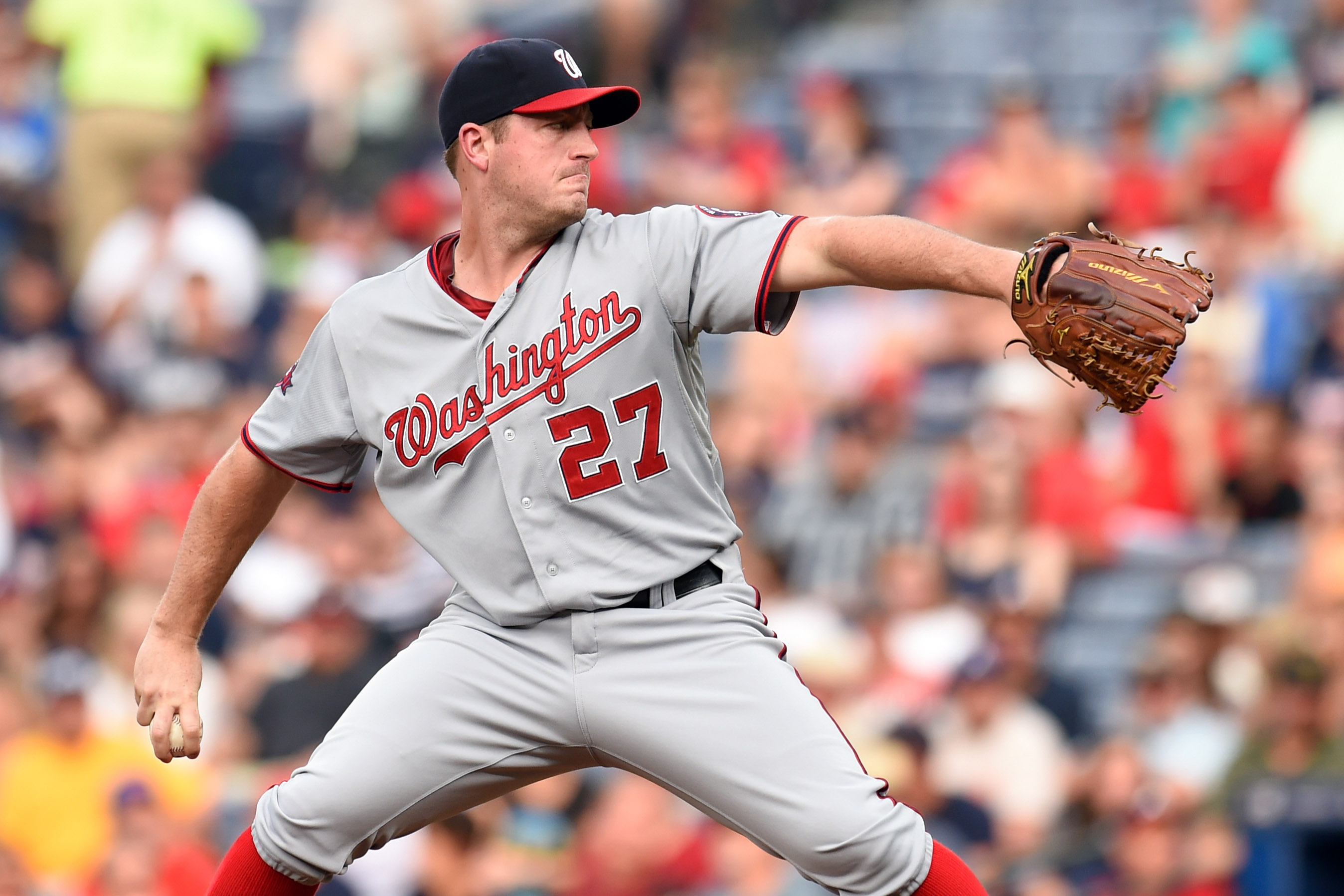 "The best command probably he's had of [his curve] all year," Williams said. "He's thrown some, especially he likes to use it against the lefties too, but last night was really good. I thought he was in command from the first pitch. Fastballs down in the strike zone to both sides and then the slider to the righties and curveball to the lefties was really good. There was a lot made yesterday of -- you face the same team and especially the same pitcher in real close proximity to the last game and what advantage is there? Is there advantage pitcher? Is there advantage hitter? We would all think that it's kind of advantage hitter because they have an idea of timing and what a guy is going to do to get them out, but for the second time in a row, Jordan pitched really well against them. Last time out he was eight innings of scoreless, so again, just command off all of his pitches, working quickly and throwing strikes."