The Washington Nationals and Los Angeles Dodgers finished up their suspended game this afternoon. It was all tied up at 3-3 in the eighth when Matt den Dekker hit a pinch hit home run to right field for a two-run blast that made it 5-3 Nats.

The third power failure of the night on Friday night in Nationals Park led to the series opener of the three-game set between the Washington Nationals and Los Angeles Dodgers being suspended.

A bank of lights down the third base line kept going out, leaving the field of play too dark to continue.

"Once the lights came back on, you can't anticipate it happening again. After the second time, we collectively made a decision that if it did happen again, then that would be the end of it..." -Matt Williams on the decision to suspend the game on Friday

A two-run home run to left field by Yunel Escobar (no.5) off Dodgers' right-hander Chin-Hui Tsao in the bottom of the fifth put the Nationals ahead, after an RBI groundout by Bryce Harper made it 1-0 after three, and Adrian Gonzalez's two-run home run off Jordan Zimmermann in the fourth made it 2-1 L.A.

Tanner Roark, who scored on Escobar's home run after completing a quick, scoreless inning in the top of the fifth, threw just seven pitches last night, so Nats' skipper Matt Williams decided to go back to him today when things started up again at 2:05 PM EDT in D.C.

"As it sits right now Tanner will go back out," Williams said this morning. "He threw seven pitches last night, so he's ordinarily available today anyway for a couple innings. We'll see how he feels when he gets out there and throws.

"If for some reason he's tired, doesn't feel good, then we have options, but that's how we're planning it right now."

As for how the situation was handled last night, Williams said he was okay with the way things went down.

"One, as we discussed last night, we're not going to play in those conditions. Two, once it happens, which it really hasn't happened, they troubleshoot and find the cause," Williams explained.

"Once the lights came back on, you can't anticipate it happening again. After the second time, we collectively made a decision that if it did happen again, then that would be the end of it, because we just couldn't continue to run through pitching and have our guys stand out there and play an inning or two innings and have it happen again."

Roark took the mound again today at 2:05 and gave up a one-out home run to left by Adrian Gonzalez, who hit his second home run of the game all the way the other way for an opposite field blast that cleared the left field wall and tied things up at 3-3. Gonzalez's 20th.

Chin-hui Tsao came back out too and completed an inning of work before the Dodgers hit for him in the top of the seventh.

Joc Pederson reached safely on a grounder through shortstop Ian Desmond's legs with two down in the seventh, but the Nats' new pitcher, Aaron Barrett, worked round Desmond's 21st error for a scoreless inning of work. Still 3-3.

Yunel Escobar doubled with one down in the Nationals' half of the seventh on a pop to short right that Dodgers' second baseman Howie Kendrick lost in the midday sun.

One out later, after former Nats' reliever Joel Peralta put Bryce Harper on with the second intentional walk of the game to Harper, Dodgers' skipper Don Mattingly went to the pen for left-hander J.P. Howell.

Clint Robinson stepped up with two on and two out and walked to load the bases. 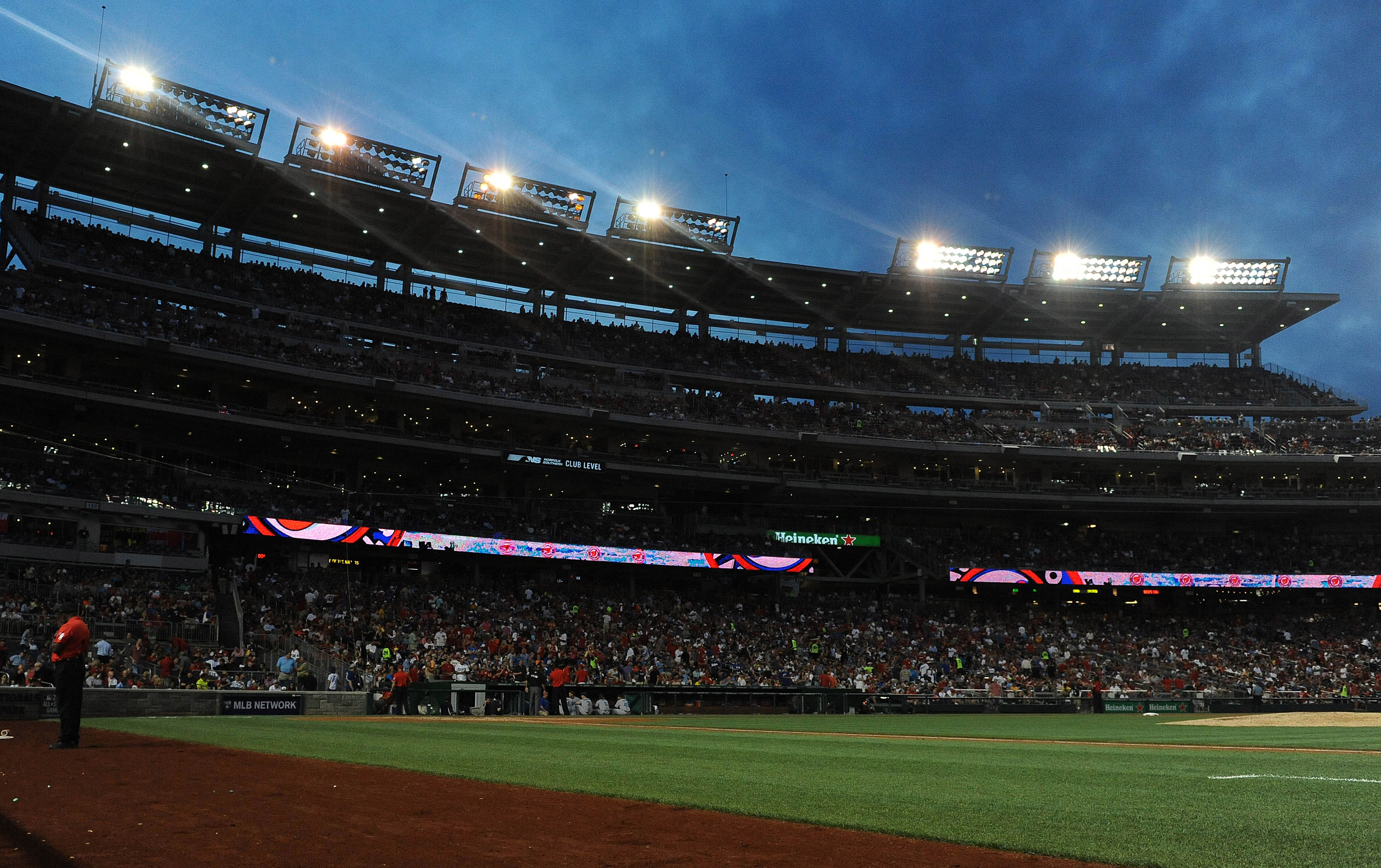 Mattingly went to the bullpen again [yawns) for right-hander Pedro Baez vs Wilson Ramos, who went down swinging to end the frame. Still 3-3.

After Casey Janssen retired the Dodgers in order in a 12-pitch eighth, Baez came back out for another inning of work.

Tyler Moore singled with one down, but was forced out at second on a grounder to third by Michael Taylor, but Taylor avoided the double play, and scored when Matt den Dekker took a first-pitch fastball for a ride to right and into the second deck. 5-3 Nationals on den Dekker's 2nd.

Drew Storen was already warming so he came in with the lead looking for save no.28 of 2015, but after a leadoff walk to Yasiel Puig and a single to enter by Andre Ethier it looked like the Dodgers might rally.

Jimmy Rollins sent a line drive to center for out no.1. Alberto Callaspo popped out to left for out no.2. Joc Pederson stepped in with two on and two out and K'd on a check swing strike three to end it.