The Washington Nationals dropped the second and third games of their three-game set with the Los Angeles Dodgers and now they face the New York Mets, who are lined up with their top starters going in the series in the nation's capital.

Share All sharing options for: Nationals and Mets start three-game set: Will rotation juggling pay off for New York?

New York Mets' skipper Terry Collins talked to reporters last week about lining his rotation up for the start of the second-half with an eye on having his top arms available for the Mets' three-game set with the NL East-leading Washington Nationals, which starts on tonight in Nationals Park.

For the three-game weekend set with the St. Louis Cardinals, Collins sent rookie right-hander Noah Syndergaard, Bartolo Colon and Jon Niese out to the mound, which set them up to have Matt Harvey, Jacob deGrom and then Syndergaard again lined up for the series in the nation's capital.

"For us to stay in this race, we’ve got to beat Washington," Collins told reporters including The New York Post's Mike Puma. "That is why we aligned the rotation the way we did."

The Mets started the so-called "second-half" of the 2015 campaign 47-42, but dropped the first two of three with the Cards while the Nationals split the first two games of their three-game set against the NL West-leading Los Angeles Dodgers with Jordan Zimmermann and Doug Fister starting the first two out of break and Max Scherzer going in the series finale with L.A. in D.C.

Nats' skipper Matt Williams was asked about the decision to hold Scherzer back for the third game of three with the Dodgers, which meant that the Nationals' ace would miss the Mets in each of their next two series with their top rival for the NL East crown at this point.

"One: [Scherzer's] workload has been pretty immense as compared to what he's used to," Williams explained.

"Certainly pitch counts are one thing, but ups and innings are different. That, the fact that he pitched the last game [of the first-half] and went into the ninth inning is a factor. One off day in the next thirty-one days is a factor."

"Giving up only one run is good, but good is not good enough when you're going up against Greinke and what he's doing right now." -Max Scherzer on loss to Zack Greinke and the Dodgers

"So I have to look at it long-term as we all do and look at the next thirty-one days and look at how much rest he is going to get which will be virtually none, so this is an opportunity, probably the only opportunity, that we'll have to give him an extra couple days."

Williams said that though the matchup with the Mets was important, there were a number of tough series coming up and he and the Nationals needed all of their starters going strong.

"So if we get to where we want to get to, it's going to take five guys, not one.

"I know there's a lot made of it, and I can have an opinion about it and everybody else can too, but if we want to get to the postseason and be a contender in that postseason, we're going to need all five of the guys.

"And so, that and the answer I just gave -- we've got to get him some rest at some point, granted he's our ace, we're not looking at the opponent, necessarily, as we are the long-term of the rest of the season."

Jordan Zimmermann's start in the series opener with LA was wiped out after four innings by delays caused by a bank of lights in Nationals Park malfunctioning.

Doug Fister and the Nats ran into a red-hot Clayton Kershaw on Saturday afternoon after wrapping up Friday's game, which the Nationals won, 5-3.

Kershaw dominated the second game of three, however, limiting Nats' hitters to three hits in a 4-2 win in which he struck out 14 batters over eight scoreless innings of work. Fister gave up four runs on nine hits in five innings.

"I thought I did pitch well. Giving up only one run is good, but good is not good enough when you're going up against Greinke and what he's doing right now." -Max Scherzer on loss to Dodgers on Sunday

Scherzer matched up with Zack Greinke, whose recent run of scoreless innings was increased by eight after his own dominant outing against the Nationals, which saw the veteran righty go eight scoreless as well, striking out 11 in a 5-0 win that gave the Dodgers the series.

Scherzer allowed just one run, on a wild pitch with Andre Ethier on third after a double and sac bunt put him 90 feet from home, but it was enough for the Dodgers, who added four in the ninth against the Nationals' bullpen.

"They did a great job against me and battled me," Scherzer said after the loss.

"I thought I did pitch well. Giving up only one run is good, but good is not good enough when you're going up against Greinke and what he's doing right now.

"He just completely shut us down. He's throwing the ball outstanding and I just wasn't able to match him."

"We swung at some out of the strike zone, they made good pitches as well, the results are the results, so we look forward to tomorrow."

The Mets dropped the first two of three with the St. Louis Cardinals this weekend before salvaging a win in Sunday's marathon eighteen-inning finale, so they enter the three-game set in Nationals Park 2.0 games out in the NL East. 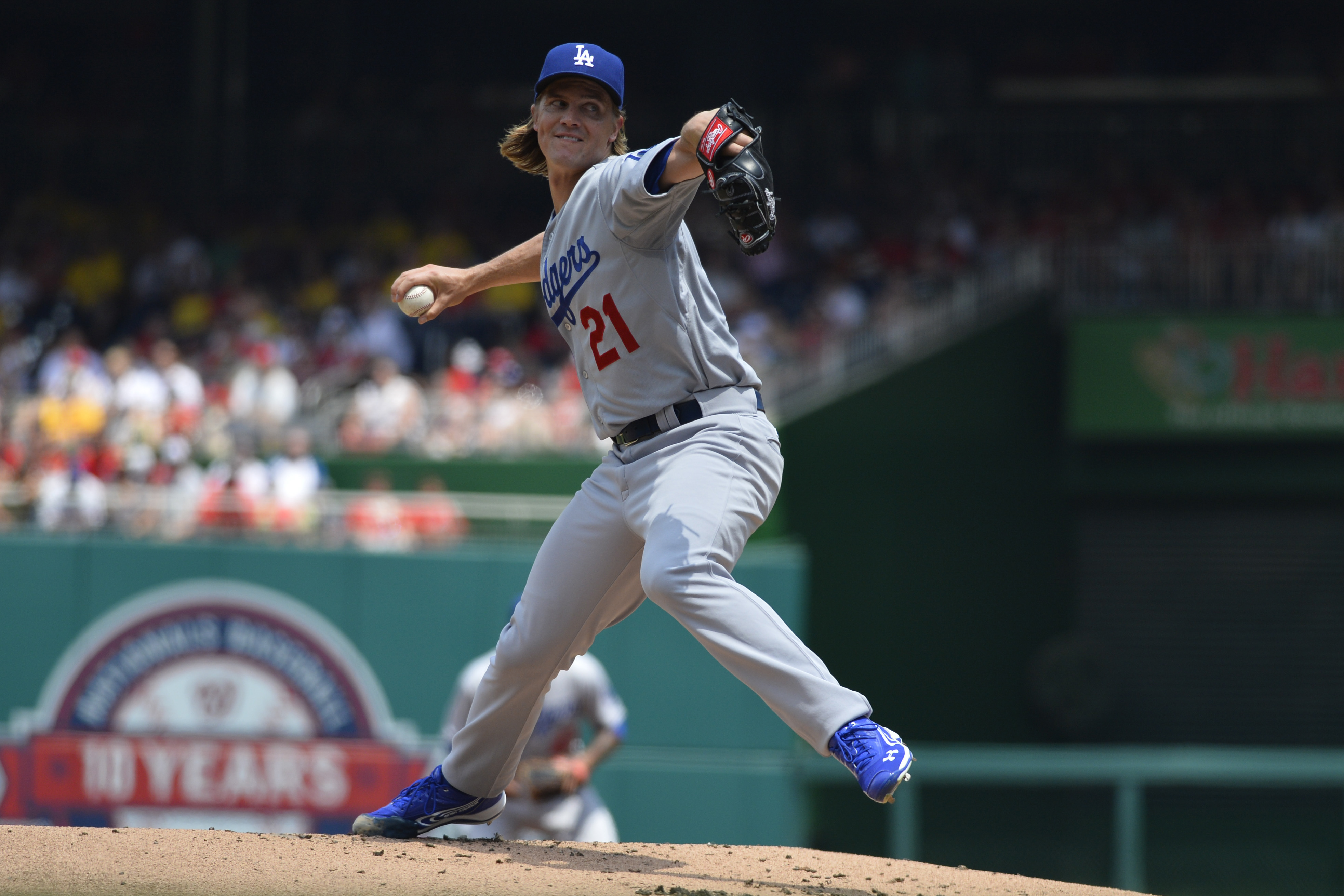 The Nats' depleted lineup, which struggled to generate much of anything against Kershaw and Greinke, will face the top three starters in the Mets' rotation with Gio Gonzalez against Matt Harvey tonight, a Nationals' starter who hasn't been named yet going up against deGrom and then Zimmermann again against Syndergaard in the third game of three with New York in D.C.

The Nationals are 5-5 in their last ten heading into the divisional matchup.

The Mets have won seven of their last ten.

Washington has won four of seven games against New York this season, though they dropped two of three in Nats Park in the first series of the 2015 campaign. The latest matchup between the NL East rivals starts at 7:05 PM EDT.