Washington Nationals' manager Matt Williams talked about what the New York Mets were up against in seeing Joe Ross live for the first time. This afternoon, the Nats take on Mets' rookie right-hander Noah Syndergaard.

Washington Nationals' skipper Matt Williams talked with reporters before last night's game about what it's like to face a new pitcher with only scouting reports and video to rely on.

"If you don't know somebody and you haven't stepped in the box," Williams explained, "video is from the other side, off angle, you can't get a real true read of what the ball is doing when it leaves his hand.

"From a hitter's perspective anyway, you do what you do, and look for a pitch that you can hit.

"If you don't know somebody and you haven't stepped in the box, video is from the other side, off angle, you can't get a real true read of what the ball is doing when it leaves his hand." -Matt Williams on facing young pitchers for the first time

"They'll know exactly what he throws, the video is there, what pitches he features, how quick he is to the plate, all of those things, but when you step in the box you've just got to do what you do well, look for a pitch that you can handle."

Ross, 22, limited the Nats' NL East rivals to four hits and three runs (2 ER) in 6 ⅓ innings pitched of what ended up a 7-2 loss for the Nationals.

Ross has located his sinker well thus far in the majors, holding opposing hitters to a .242 AVG on the pitch through his first four outings, but it's the wipeout slider (.098 AVG against) that's been a real weapon thus far.

Will opposing hitters learn to recognize and lay off the pitch going forward once they've seen Ross once or twice and there's a "book" on the right-hander? How will the right-hander adjust to hitters' adjustments?

Williams also talked about the maturity on display from Ross, who was sent down to Triple-A after his first three outings, in spite of good results, when Stephen Strasburg returned from the Disabled List last month.

"He was in command the whole time he was out there. Got up there in pitches and had some trouble there in the last inning, but I thought he pitched great." -Matt Williams on Joe Ross vs the Mets

"The reports were good," he said. "Focused, pounding the strike zone like he did when he was here."

So how long will Ross stay around this time? At least until Strasburg returns? "I think that's our plan," Williams said.

The Nationals are, however, monitoring the number of innings Ross has thrown this season, after throwing a total of 121 ⅔ innings at Double-A in the Padres' system last season.

He's thrown 102 ⅔ combined this season between Double and Triple-A and the majors so far this season. An increase is normal, of course.

"The concern is -- for Joe anyway -- is last year he was 120 innings and starting the whole season," Williams said, "that inning count can get up there pretty quickly, so they were limiting his amount of innings down there [at Triple-A Syracuse] from time-to-time, but he's pitched well and I know he's eager to get back and give it another go here."

Williams liked what he saw from Ross in start no.4. "I thought he pitched well," he said.

"He was in command the whole time he was out there. Got up there in pitches and had some trouble there in the last inning, but I thought he pitched great."

The Nationals will be in the Mets' position this afternoon, in the series finale of the three-game set when they get their first look at Noah Syndergaard, New York's 22-year-old rookie right-hander. 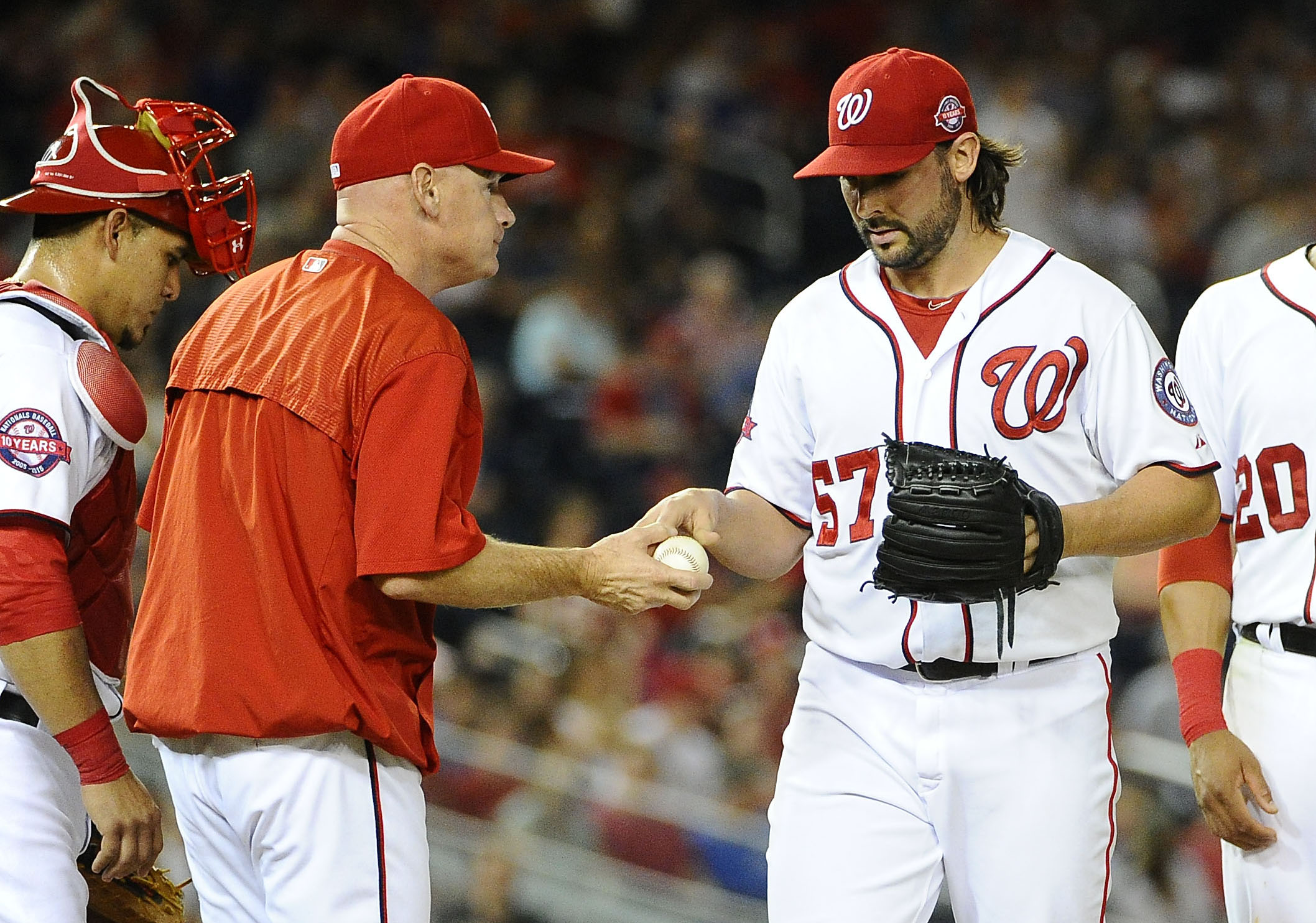 Opposing hitters have a .187 AVG against his four-seamer so far, and a .326 AVG on his sinker.

Can the Nationals figure the Mets' rookie out and take the series finale and two of three from the NL East's second play team?