Rockies closer John Axford figures to draw some interest from the teams that are pursuing relievers at the deadline. Should the Nats be interested? Probably not. We'll have a look anyway.

Since the non-waiver trade deadline is next Friday, we're going to continue to look at some of the Nats potential trade targets over the next week. As I noted in the comment section yesterday, I'm certainly not going to like all of the possible trade options equally. We'll keep rolling through relievers to start, since the prevailing notion seems to be that the Nats are after relief help more than anything else. The Nats need help offensively as well, but the buzz is that they feel like they're going to be adding four bats the rest of the way when Anthony Rendon, Denard Span, Jayson Werth, and Ryan Zimmerman get healthy. Let's start with a link to the other relievers that we've already looked at....

This morning, we're going to look at Colorado Rockies closer John Axford. Axford may not necessarily be in the class of some of the other relievers that we've covered so far, but he's certainly available and could provide the Nats with a useful power arm to help bridge the gap between the starters and Drew Storen. His fastball can touch the high nineties, and he's been effective enough over the past five seasons so that three different teams have used him as their primary closer.

If you'd like to save time and get a summation of what this article is going to say, it's this. Axford's statistical profile kind of screams "Run!" He has the big fastball and actually throws a couple of different breaking balls that can occasionally be effective when he can throw them for strikes. He's had major control problems throughout his career, though, averaging a walk every two innings. He's also had his fair share of trouble with the long ball over the past few years. While the velocity and the three pitch mix mean that he can strike hitters out in bunches, there are just too many red flags in his game.

Don't tell Axford that, though. Axford heard for years that he was probably never going to amount to anything in the majors. Axford was originally selected in the seventh round by the Seattle Mariners in 2001, but went to college instead. After pitching for Notre Dame in college, Axford's stock dropped quite a bit. In 2005, he was drafted again by the Cincinnati Reds... in the 42nd round. He never signed with them either. In August of 2006, Axford signed with the New York Yankees as an amateur free agent. He didn't throw his first pitch as a professional until the 2007 season, beginning his pro career as a starter in the Yankees system. After five starts, they moved him to the bullpen and actually pushed him pretty hard. He reached AAA late in the year and pitched fairly well out of the bullpen. Still, New York released him at the end of the season.

That's when Axford found the organization that he'd eventually break into the majors with. He signed with the Milwaukee Brewers before the 2008 season and had a mediocre season shifting between the rotation and the bullpen. In 2009, they moved him to the bullpen full-time and things started to click. He had a solid season in the high minors, eventually making his big league debut. Axford returned to Nashville in the bullpen to start 2010 and dominated for a month and a half before getting called back to the majors. Five appearances later, the 27-year-old rookie notched his first career save... A week later, he got another save chance and converted it. Then, suddenly, the 27-year-old rookie amateur free agent who three organizations had given up on was the Brewers regular closer.

While I say that John Axford isn't the guy that the Nats want, it's important to note that plenty of evaluators have said exactly the same thing about Axford over the years. He's proven quite a few of them wrong before.

Why could the Nats use him?

Axford is a solid veteran reliever who is comfortable throwing in high leverage spots. While his strikeouts are down a bit this season (8.90 K/9 vs. 10.59 career), he's still a guy that can be called upon when the situation calls for a strikeout. He also has postseason experience. He was the Brewers closer when they reached the NLCS in 2011 and served as a setup man for St. Louis when they reached the World Series in 2013. While he's currently a closer in Colorado, he's shown that he'll accept pitching in a less prominent role. He's pitched fairly well for both the Cardinals and Pirates after midseason trades the past two seasons.

Axford does have that three pitch mix that we brought up earlier. His fastball doesn't have a lot of movement, but it sits at 95.5 MPH this season according to Pitchf/x. Back when he was in Milwaukee, Axford used to touch 99 on occasion. I'll confess I haven't seen him pitch this year, but if he's sitting in the mid-nineties, it's safe to assume he's still capable of reaching back for 98 from time to time. He mixes in a 12-to-6 curveball that averages 79 MPH and a cutter that averages 89 MPH. The curve has really good downward break on it, but he's never really shown great command of the pitch.

How would the Nats use him?

If the Nats were to go out and acquire Axford, I'd imagine he'd become the primary setup man. There's no way he would close over Drew Storen. To be honest, I'd almost rather see him slot in as a middle reliever and leave Casey Janssen as the primary right-handed setup option.

Does he have any weaknesses?

Axford's career walk rate is 4.40 BB/9. It's actually been quite a bit worse than that career average over the past two seasons (5.93 last season, 4.91 so far in 2015). That's an awful lot of free passes for a guy that will usually be coming into games (and currently is in Colorado) with the lead in a close game. There are few things that irritate me more than a closer with a one or two run lead putting a man on base for free.

Axford's home run rate is way down this season over the past three years, but I'm not sure how much I trust 29 innings worth of data. Over the past three seasons, Axford has allowed 1.23 HR/9 innings, which was the tenth highest figure among qualified relievers in that span. Per Fangraphs, Axford has been sub-replacement level (-0.6 fWAR total) since those outstanding 2010 and 2011 seasons.

Although he's bounced around, Axford still has less than six years of service time. He has one more year of arbitration remaining. The Rockies are paying him $2.6 million this season, so he's due about $900,000 the rest of the way. I'd guess that final year of arbitration comes in somewhere between $4-5 million given that he's accumulated a lot of those coveted saves over the years.

What will the Rockies be looking for?

Particularly for a franchise that has so much trouble signing free agent pitchers because of their home ballpark, young cost-controlled pitching is atop the list. It's hard to imagine that Colorado thinks that they're going to net much for an average reliever who has rebounded a bit this year after two pretty disappointing campaigns in 2013 and 2014. They'd probably take a lottery ticket or two who could maybe turn into something down the road.

Will the Nats trade for John Axford?

I sure hope not. I cheered for him a bit when he was in Milwaukee because of the underdog angle and the killer mustache: 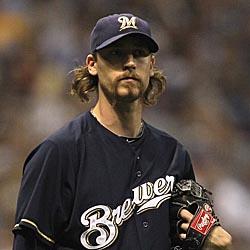 When it comes time for me to think about whether I want the Nats to trade for him, I have to look more at his actual ability though. It's just not at the level of most of the other pitchers that we've been looking at this week. I'm not sure I'd say he'd improve upon the combination of Aaron Barrett and Blake Treinen that will probably factor in as the Nats right-handed middle relief if they stand pat at the deadline (Treinen won't be down too long), much less improve upon the setup tandem.

In honor of Axford's red flags (mainly the walks) and the Ontario native's homeland, let's add a musical accompaniment at the end of today's article. If you stuck with reading about John Axford this long, I reward you with Canadian rock band Billy Talent: