There is not much information to report at the moment, but after looking uncomfortable on the mound in the fourth inning this afternoon, Stephen Strasburg, who was rolling to that point, was lifted with an apparent injury. More info when it's available...

There is no information available on what the issue was, since the Washington Nationals have a long-standing policy of not providing injury information during games, but Stephen Strasburg was lifted in the fourth inning of today's game with an apparent injury issue.

We'll update the story as soon as possible, but what we do now is that Strasburg came out with two down in the fourth when Nats' manager Matt Williams and team trainer Lee Kuntz spotted something they didn't like and went out to the mound for a long talk with the 26-year-old right-hander before the decision was made to lift him in favor of Tanner Roark.

On the replays, Strasburg clearly grabbed his left side, on the front, under the ribs after delivering the last pitch he threw, after stretching his back/side earlier in the inning after throwing a pitch.

Here's what happened before the injury from our soon-to-be published post game report:

"When we saw him throwing, the velocity was good, the spin rate was good, the breaking balls were good, so we just wanted to make sure that we got him healthy..." -Mike Rizzo on Stephen Strasburg before his DL stint

"I think it's mechanical," Rizzo said.

"Delivery is smoother, more on line, more comfortable. He's not looking for a landing place to ease the pain of the ankle and that type of thing. So I think that has a lot to do with it and with some success and when you're feeling good, you're always more confident and I think that's a part of it too."

Rizzo also stressed the fact that through all his early season issues, there were reasons to believe that Strasburg would be able to straighten things out.

"When we saw him throwing, the velocity was good," Rizzo explained, "the spin rate was good, the breaking balls were good, so we just wanted to make sure that we got him healthy and got the delivery and the mechanical thing under [control] and feeling good about himself and we knew that results would follow shortly thereafter."

Strasburg's 13th start of the 2015 campaign began with an 11-pitch, 1-2-3 first. Given a 3-0 lead to work with after home runs by Michael Taylor and Bryce Harper in the home-half of the first, Strasburg came back out and gave up a one-out walk to Brandon Belt, who was subsequently picked off first on a snap throw by Wilson Ramos. A swinging K by Brandon Crawford ended Strasburg's second scoreless after 13 pitches. 24 total after two.

Justin Maxwell lined a single to right with one down for the Giants' first hit off Strasburg and Gregor Blanco walked with two outs after a seven-pitch battle, but Joe Panik grounded into a force at second to end a long-ish 22-pitch third. 46 total. 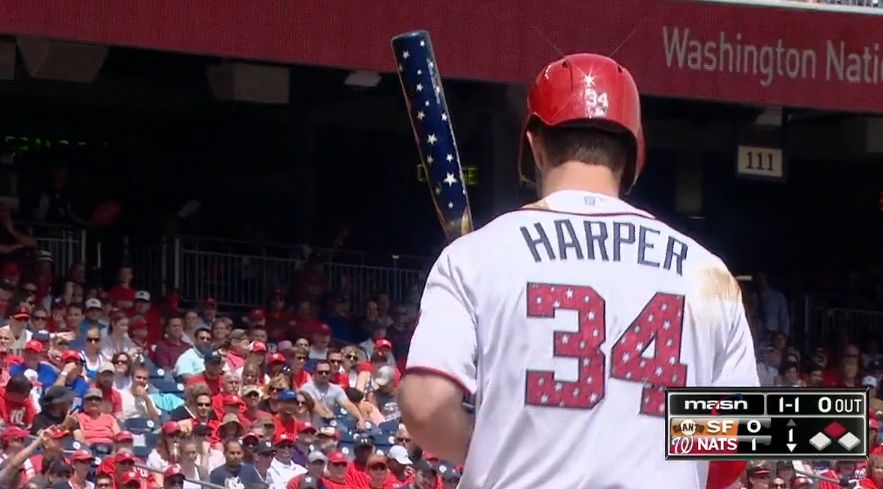 Strasburg started locating his offspeed stuff in the fourth, but nine pitches into the fourth, the right-handed starter was removed from the game after a long talk on the mound with Nats' manager Matt Williams and trainer Lee Kuntz.

No word from the Nationals on what was bothering him. More info when it's available...