Gio Gonzalez fell behind hitter after hitter in the Washington Nationals' series opener in New York, so the bullpen got a lot of work in what ended up a twelve-inning, 2-1 loss to the Mets.

The 29-year-old left-hander threw a total of 105 pitches, 59 for strikes in 4 ⅔ innings pitched before he was lifted in favor of reliever Tanner Roark.

"He made some pitches when he had to, but extended pitch counts just got him. Upwards of 100, didn't get through five..." -Matt Williams on Gio Gonzalez vs the Mets

Gonzalez gave up just four hits and one run, but he walked four batters and fell behind hitter after hitter throughout his time on the mound.

"He made some pitches when he had to," Nats' skipper Matt Wiliams said after what ended up a 2-1, twelve-inning loss.

"But extended pitch counts just got him. Upwards of 100, didn't get through five, so it's a one-run game there, we ended up tying it late, but he just couldn't go any further."

Roark finished off the fifth inning, and completed two more after that, with the right-hander throwing a total of 28 pitches.

After Roark, Aaron Barrett threw two quick frames on 17 pitches as the Nationals rallied to tie things up at 1-1 before Williams turned it over to left-hander Felipe Rivero.

"It's one game. It could have been a 3-1 game in nine. It counts the same. The problem is we had to use extended guys in the bullpen..." -Matt Williams on the Nats' extra innings loss to the Mets

As for his comment that the Nationals were short? Jonathan Papelbon warmed up late in the game when it looked like he might be needed. Matt Thornton warmed in extra innings.

Drew Storen threw a total of 19 pitches in back-to-back games against the Marlins in the second and third games in Miami.

So were Storen and Casey Janssen unavailable, forcing Williams to stick with Rivero when the Mets were set to send three right-handers to the plate in the bottom of the twelfth?

"Were there some guys that were unavailable tonight?" Williams was asked. 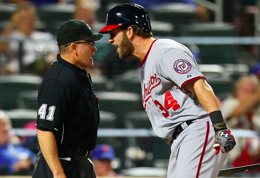 "And who would that be?"

With the loss to the Mets, the second-place team in the NL East, the Nationals' lead in the division sits at just 2.0 games, but as he's said all season, the Nats' skipper stressed that it was just one game, and they'll move on.

"It's a game," he said. "It's one game. It could have been a 3-1 game in nine. It counts the same. The problem is we had to use extended guys in the bullpen, so see if we can make an adjustment from that tomorrow."