Washington Nationals' manager Matt Wiliams said the Nats' lineup might change after they scored just one run in their third straight loss last night in AT&T Park. Will the San Francisco Giants get a new look Nationals' lineup tonight?

Share All sharing options for: Changes to Washington Nationals' lineup? "You'll know when I make the lineup..." - Matt Williams

The Washington Nationals made San Francisco Giants' starter Ryan Vogelsong throw 28 pitches in the top of the first inning Thursday night in AT&T Park, with Yunel Escobar launching the first to left for a solo home run. 1-0.

Bryce Harper's one-out walk and two-out walks by Jayson Werth and Ryan Zimmerman, loaded the bases, but a Wilson Ramos' groundout to second ended the threat. After the Nationals failed to build on Escobar's leadoff home run, a triple, RBI single to right, walk and RBI single to left from the first four batters in the Giants' first put the home team up 2-1 after one in what ended up a 3-1 win.

"Stephen pitched okay, had a rough first inning himself, but settled down after that as well, just couldn't put anything together." -Matt Williams on Stephen Strasburg vs the Giants

Nationals' starter Stephen Strasburg settled in after a 26-pitch first and completed five scoreless frames after the shaky start, but the runs the Giants scored early were all they would need to take the series opener.

"We had a big opportunity there, bases loaded, that could change the game for us," Nats' skipper Matt Williams said of the missed opportunity in the first.

"But, you know, Stephen pitched okay, had a rough first inning himself, but settled down after that as well, just couldn't put anything together."

He limited the Nats to two hits in the next four innings, retiring eight straight batters after the Nationals loaded the bases in the first, and stranding two in the fourth after Washington put runners on the corners with one down.

"I think, for the most part, we're not even swinging at them. We need to swing at the fastball... if we get a chance to swing at that fastball we need to do that." -Matt Williams on Nationals' hitters taking heaters

What was different after the first?

"Just found a little bit of command," Williams said,  "but threw a lot of fastballs tonight."

Vogelsong threw mostly four-seam fastballs (44 of 93 by Brooks Baseball's count, though MLB has him at 94 total), which averaged 92.2 mph and got up to 94. He threw 24 of them for strikes (54.5%), got seven swings and misses and threw 20 of them for strikes that were not put in play (SNIPs - Strikes Not Put in Play).

Of the four that were put in play, two of them went for hits.

Williams said the fastballs they took were the problem.

"The leadoff triple and then the base hit and they punched one more, but after that he settled in and he made some nice pitches to get out of that inning too, so I thought he pitched all in all pretty well." 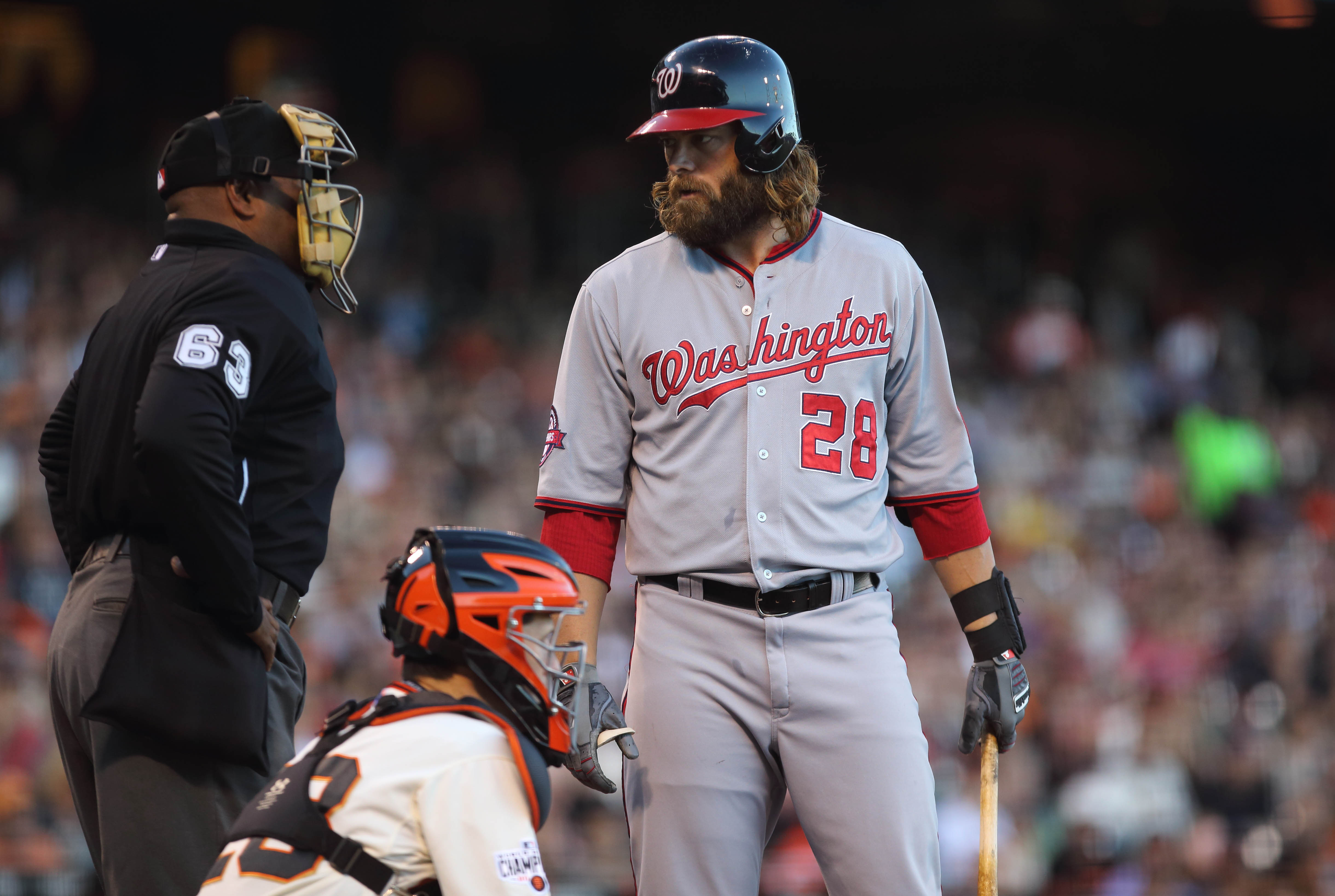 The second-year skipper was asked what he could do to spark the Nationals' offense, which produced just one run in the last 27 innings in back-to-back shutout losses to the LA Dodgers and last night's loss to the Giants.

"We can make some changes, sure," Williams explained.

"We want opportunity for our guys, we had some in the first inning, and that one base hit didn't happen. But nonetheless we have to stay aggressive throughout the game and if we're offered a fastball to hit, we need to take a pass at it."

So what changes will he make?

"You'll know when I make the lineup," Williams said.