The Washington Nationals' loss last night was their fifth straight. It left them 4.5 games out in the NL East with 46 games to play. Matt Williams was asked by a reporter if the Nats hit rock bottom in AT&T Park?

Share All sharing options for: Have the Washington Nationals hit rock bottom? Matt Williams says, "No."

Friday night's loss was the Washington Nationals' fourth straight. It left them 4.5 games behind the New York Mets in the NL East.

Nats' skipper Matt Williams was asked after the loss about situation the Nationals found themselves with just 47 games left on the schedule at that point.

"Everybody is fully aware of that that sits in that clubhouse," Williams said. "We have to prepare for tomorrow. It's never going to be easy during any game. One swing of the bat and we just might win that one tomorrow and you never know what can happen from there."

"He lost command of the strike zone. And then they got in some good hitters' counts and hit some balls really hard. He just couldn't get out of it." -Matt Williams on Gio Gonzalez blowing up in the 3rd

The Nationals got off to a good start in the third game of four with the San Francisco Giants last night in AT&T Park, with an RBI double by Yunel Escobar in the first and a tape-measure homer by Ian Desmond in the second, but after starting his outing with two scoreless frames, Nats' left-hander Gio Gonzalez imploded in the third.

Gonzalez ended up giving up five hits, two walks and six earned runs in a 36-pitch frame. He was lifted with the Giants ahead 6-2 in what ended up a 12-6 loss.

"He lost command of the strike zone," Williams said. "And then they got in some good hitters' counts and hit some balls really hard. He just couldn't get out of it. So we had to go to the bullpen again.

"I'd like to get him through that one and one more, of course, but at that point he'd already been 30+ pitches in the inning, so we wanted to get him out of there and get him ready for his next one."

The Giants didn't let up, with Buster Posey and Kelby Tomlinson doubling in runs in the fifth, 9-2, Brandon Belt hitting an RBI double in the sixth, 10-5, Matt Duffy driving in a run in the eighth, 11-5, and Posey again hitting an RBI single, 12-5.

"We're still in this hunt here, so no. We've got to play better, of course, but to ask it that way and to answer it that way would not be fair to the guys in that room. -Matt Williams on whether Nats have hit rock bottom

The loss left the Nationals 58-58 on the year, with losses in five straight and seven of the last ten.

A silver lining if you're searching for one? The Mets dropped back-to-back games to the Pittsburgh Pirates, so in spite of the Nationals' dispiriting losses, they haven't lost any ground in the division race.

So, Williams was asked, how bad was last night's loss, and is this rock bottom for the Nationals?

"That's a difficult question to answer," he said. "It's a loss. We have a lot to play. Rock bottom? We're still in this hunt here, so no. We've got to play better, of course, but to ask it that way and to answer it that way would not be fair to the guys in that room. So, what we must do is get ready for tomorrow, see if we can beat them tomorrow and get on our road down the rest of the way."

After today's series finale in AT&T Park, the Nationals have a day off on Monday before they travel to Colorado for a three-game set with the Rockies who took two of three from the Nats last week in D.C. 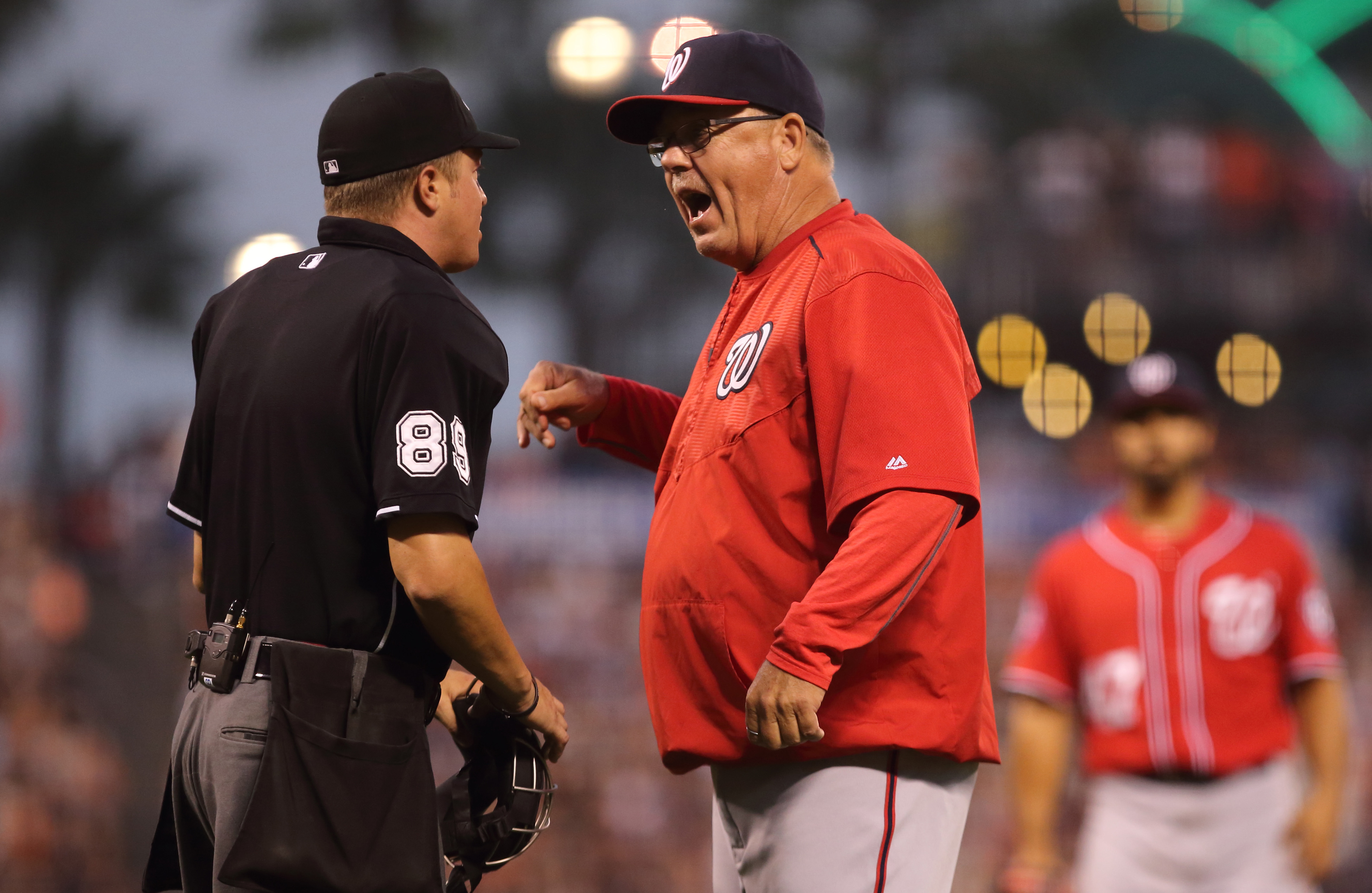 The big question going into today's game? Will Bryce Harper be available? The 22-year-old slugger fouled a pitch off his left ankle late in last night's loss, and after hobbling down to first on a flyout, headed straight to the clubhouse.

Harper was replaced in right in the bottom of the seventh.

X-rays on the ankle were negative according to reports out of San Francisco last night.

Harper told reporters, including MLB.com's Bill Ladson, that he would have to see how the ankle feels this morning:

"I got it pretty good," Harper said. "I hurt my ankle and it went down my foot. I felt pretty terrible at the time. It's still pretty bad. I'll know the status in the morning and go from there."