The Washington Nationals' Racing Presidents were coming to Harrisburg.

Though my Harrisburg Senators ticket plan is for Sundays, earlier in the season I swapped out one of my tickets for the Saturday when the Racing Presidents would be on City Island. And, like last year, the appearance by the Presidents coincided with the annual Pink Night, where the team celebrates those who have survived breast cancer and remembers those who have succumbed to it.

I'm not going to waste your time or mine by telling you about the game. The Senators were in the game against the Bowie Baysox through five innings. Colin Bates wasn't pitching a great game, but when he left after the fifth the Senators were down 2-1. Not an insurmountable peak to climb. Then Wander Suero came in to start the sixth, he set fire to the bed, and then he was lifted for Gilberto Mendez who poured gas on an already raging fire. The Senators lost 9-1, and I had all the sympathy in the world for anyone who left that dumpster fire of a game early, like most of the people seated near me.

Sorry, I am being harsh. So, why don't we focus on the positives? 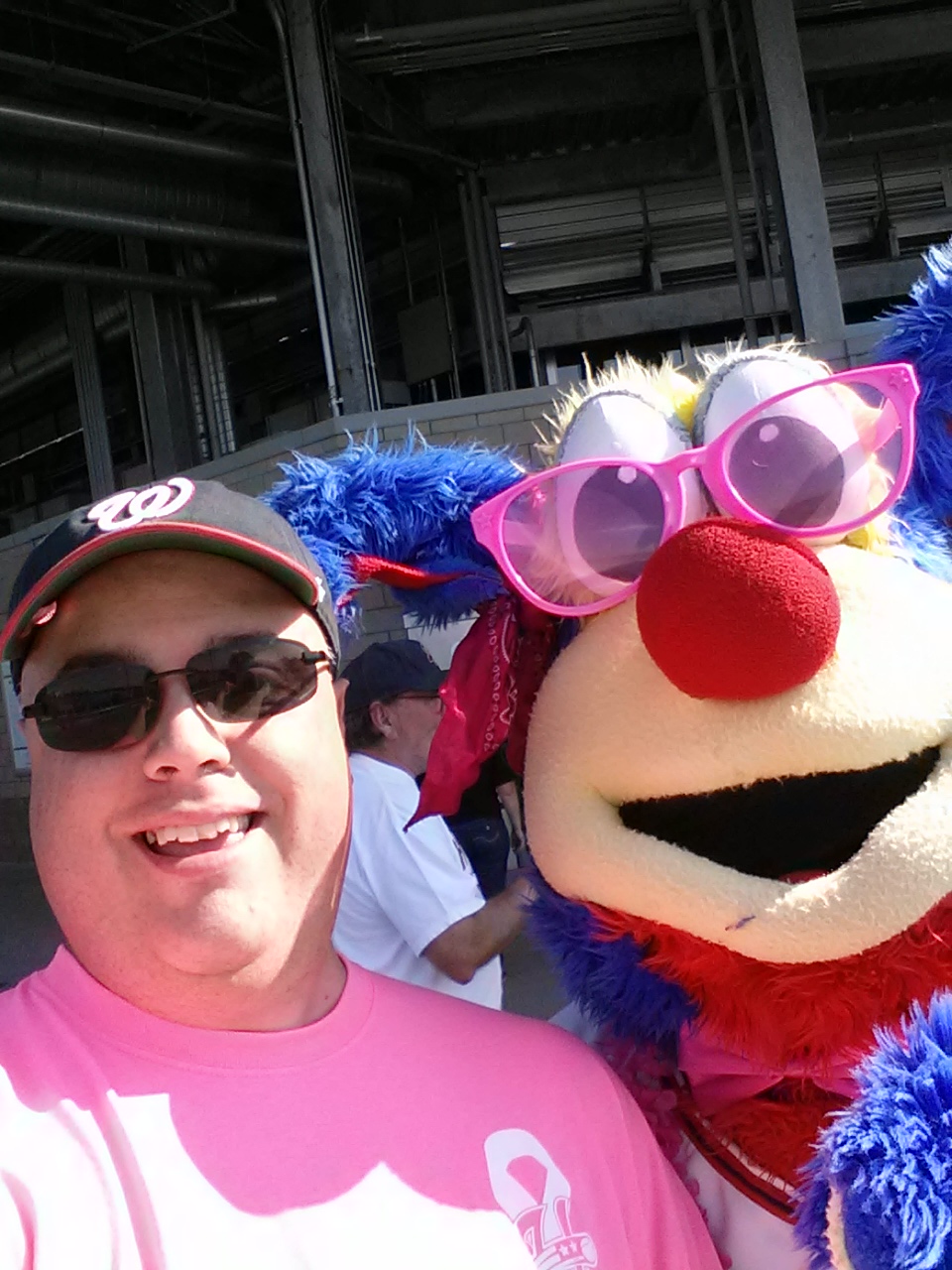 I got a selfie with Batty... err, I mean, Rascal! My niece, who has never been to a Senators game, called Rascal "Batty" when I sent her a plush of the mascot, and now I tend to refer to Rascal as Batty instead of Rascal.

As you can see, I was decked out in pink, since it was Pink Night. The Senators sold that shirt for last year's Pink Night game.

The Racing Presidents came! They mingled with the crowd. They danced on the left field boardwalk. They stretched with the players; Teddy did squats. They even spent time with the breast cancer survivors and families during the pre-game ceremony.

"It is not the critic who counts; not the man who points out how the strong man stumbles, or where the doer of deeds could have done them better. The credit belongs to the man who is actually in the arena, whose face is marred by dust and sweat and blood; who strives valiantly; who errs, who comes short again and again, because there is no effort without error and shortcoming; but who does actually strive to do the deeds; who knows great enthusiasms, the great devotions; who spends himself in a worthy cause; who at the best knows in the end the triumph of high achievement, and who at the worst, if he fails, at least fails while daring greatly, so that his place shall never be with those cold and timid souls who neither know victory nor defeat. " -- Theodore Roosevelt

Metro Bank Park has a music stage on the outfield boardwalk, and yesterday's band was a local Harrisburg band, Save the City. They were an interesting mix — start with alternative rock, add some jazz sounds, and then a cello. They had an interesting vibe, and they played some unexpected things, like that Daft Punk song that was super huge a few summers ago. Teddy and Abe danced to the music of Save the City. It was, frankly, kinda cool.

I was back on the island for Sunday's game.

I think think this was the fifth time this season I'd seen the Bowie Baysox.

Austin Voth, who really reminds me a lot of Jordan Zimmermann, pitched a decent, if not great, game through five innings of work. I wasn't surprised when he was pulled after five innings, down 2-1; the Baysox were taking him deep into counts and running up his pitch count, but they didn't have a lot to show for it. Again, down 2-1, the Senators weren't out of it. They could overcome that.

Then it fell apart in the eighth with Abel de los Santos giving up 2 runs, and the final nails in the coffin were provided by Bryan Harper who gave up 3 runs (including a 2-run home run off the right field foul pole) in the ninth.

Sunday's entertainment was the Zooperstars, which are a bunch of inflated anthropomophized animals who have punny names based on real sports celebrities like Harry Canary and Derek Cheetah and Pee Wee Geese. I guess they were entertaining. I felt sort of bad for whomever was inside those costumes; it was high-nineties on City Island, and the humidity must have been over 400%, so they couldn't have been any sort of comfortable.

So, the Senators lost two games and, I believe, the season series with the Baysox.

But, I had a nice time anyway.

Saturday's game was lovely. The Presidents were there, I scored a t-shirt in the t-shirt toss that I handed to the little girl seated behind me, and I sat in my favorite place in Metro Bank Park — the bleachers. In short, I was happy. Such a strange feeling that, happy. It catches one unawares.

Sunday's game was just hot, humid, and did I mention hot and humid?

Nonetheless, a good time was had. And, now that it's mid-August, there aren't many more baseball games ahead this season in the minors, so cherish what's left.

My next game is next Sunday, when they're giving away drawstring bags, but I'm thinking about buying a ticket for Saturday night as well — they're giving out Steven Souza, Jr. bobbleheads. I don't need it, but it would be a nice nostalgia piece to have, a reminder of the 2013 season when the Senators went to the Eastern League finals and my first season following the team — Souza, Blake Treinen, Aaron Barrett, and a lot of players whose life paths have taken them away from the game.

We'll see. I have a couple of days to decide. I think I'm unlikely to see Lucas Giolito either Saturday or Sunday — he just pitched on Friday, so his next rotation turn would be a midweek game. I didn't realize until today quite how big he is; standing in the line for the Star-Spangled Banner, he towered over the other Senators players. He is truly a giant among men.

There you have it. Two days on City Island. Yes, the games amounted to dumpster fires, but that happens in baseball sometimes.