Washington Nationals finally healthy? So what does Matt Williams do now?

With Denard Span expected to come back from the DL today, who does Washington Nationals' skipper Matt Williams put in the outfield tonight? If Yunel Escobar returns, what will the infield look like in the series opener with the San Diego Padres?

Share All sharing options for: Washington Nationals finally healthy? So what does Matt Williams do now?

In 36 games and 150 plate appearances in the second half, Michael Taylor has hits seven home runs, surpassing his home run total (six) over the first 72 games and 251 PAs this season, in his rookie campaign in Washington's outfield.

Taylor has, however, put up a less-than spectacular .236/.280/.421 line since the Break, though he's picked it up at the plate of late, posting a .275/.339/.529 line, two doubles, a triple, three home runs and five walks in his last 13 games going back to the start of the Nationals' ten-game, eleven-day road trip through Los Angeles, San Francisco and Colorado.

"He's getting there. It's a work in progress. Any time you have an injury to your extremity, a hand or a wrist, it's difficult to come back and feel 100%..." -Matt Williams on Jayson Werth since returning from the DL

The rookie outfielder's +16.7 UZR (Ultimate Zone Rating) leads all NL outfielders. But he may very well end up back on the bench with Jayson Werth back in left and Denard Span set to return from the DL today.

New York Post writer Joel Sherman wondered aloud earlier this month if the Nationals would "... have the nerve to move Michael Taylor... over from center to left," and make Werth a reserve once Span was back.

Sherman did note then that the veteran outfielder was just one of several members of the lineup struggling with the bat after coming off the DL, and it was possible his issues were, "... about needing more at-bats to get up to speed."

"He's getting there," Nats' skipper Matt Williams said after a 2 for 5 game by Werth in his second game in the leadoff spot.

"It's a work in progress. Any time you have an injury to your extremity, a hand or a wrist, it's difficult to come back and feel 100%, so he's getting more and more at bats and feeling more comfortable."

So will Werth remain in left field when Span returns? Is there any chance Taylor moves back to left?

And what about the Nationals' infield?

What happens when Yunel Escobar returns from the neck issue that's kept him out of the lineup for the last few games?

Williams told reporters after Sunday's win over the Brewers that he thought Escobar would be back relatively soon.

"He was available today," Williams said, "emergency off the bench, so he'll get some good treatment today, post-game, tomorrow as well. I expect him to be okay, we'll see."

With Anthony Rendon back as well, Ian Desmond hitting in the second-half and Escobar back, does Danny Espinosa return to a utility role for the next month and a half (barring any further setbacks, injuries, hiccups, etc.)?

At least one teammate thinks he should be playing every day.

"He deserves to play," Bryce Harper told reporters, including the Washington Post's James Wagner, after Espinosa went 1 for 4 with a three-run double on Sunday.

"When he doesn’t start for us, it’s pretty tough."

"I say 'unfortunately' because it wasn't the plan to start with, but early in the season [Espinosa] got a lot of at bats," Williams said on Sunday. "Got his timing, feels good about his swing and he can do a lot of things on the ball field. Good defense, turns a double play well, steals bases, he's a fantastic baserunner and he's swinging great left-handed, driving the baseball too. So, in the last couple of days, you've seen hits the other way and today the big double for us."

But then again, Rendon has started to hit in the last few games too, with a double, two home runs and four walks in his last 21 PAs.

"They punched me in the mouth in the first..." - Zimmermann 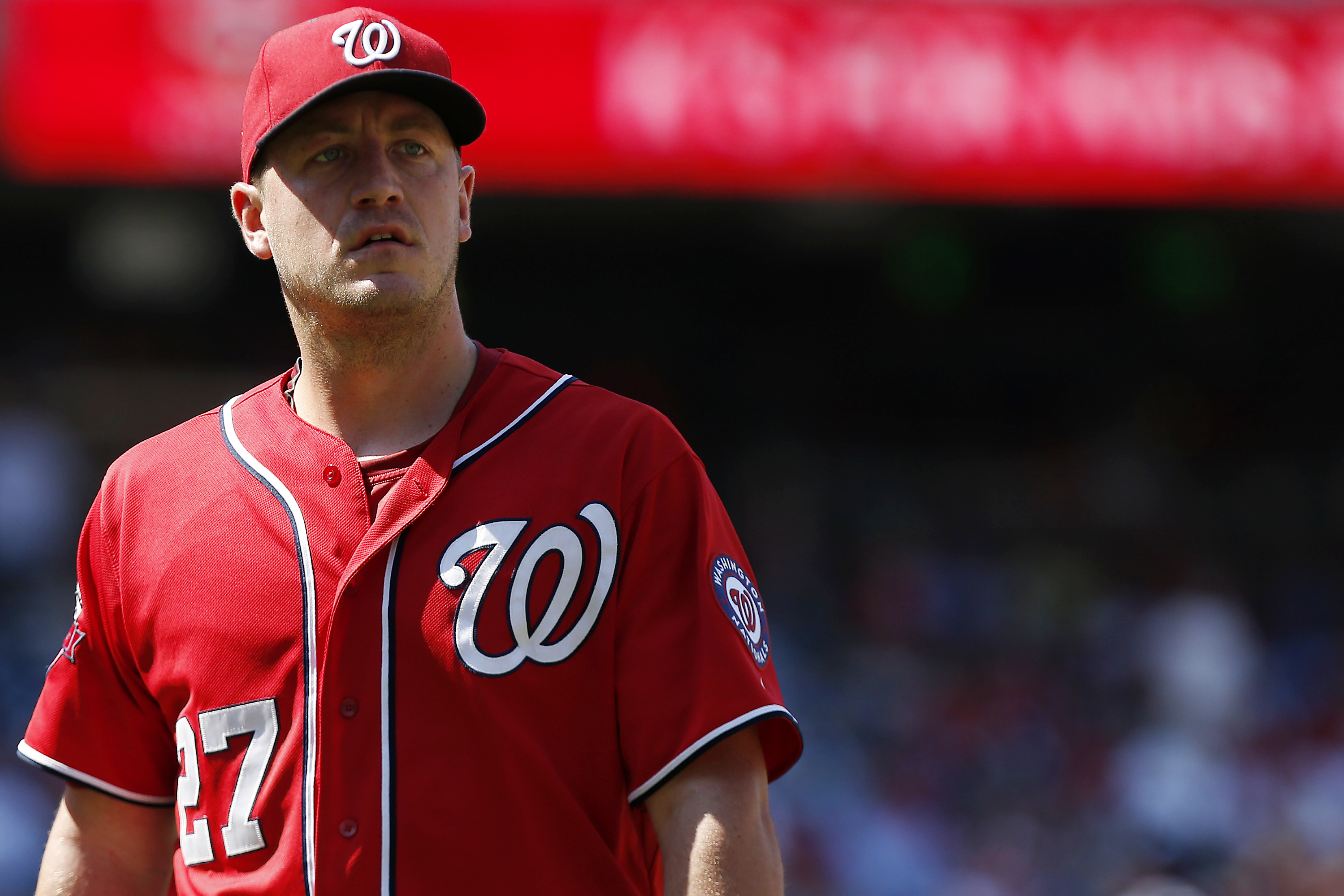 After he hit a double and a home run in Saturday's 6-1 win over the Brewers, Williams talked about Rendon getting his swing going.

"It's getting better and better as the days go by and for him it's a matter of time."

For the first time in a long time, Williams might have some difficult decisions to make tonight. Go with the hot bats?Trust the veteran's to play to the back of their baseball cards? Who will be in tonight's lineup?