The Washington Nationals called Trea Turner up to the majors last Friday, but he's been used sparingly thus far. Why? There are plenty of opinions. Matt Williams shared his thinking in an MLB Network Radio interview yesterday.

Former major league GM Jim Bowden expressed the frustration some Washington Nationals fans (and baseball fans in general) are feeling over the lack of Trea Turner in the Nationals' lineup in a rant-ish monologue on MLB Network Radio this past Sunday when co-host Jim Duquette asked for his thoughts on the way Turner has been used since he was called up.

"Why are you bringing him up if you're not going to start him?" Bowden asked rhetorically. "It makes no sense to me.

"You know what it reeks [of] to me? It reeks to me that Mike Rizzo wanted to bring him up and Matt Williams didn't want him, so Matt's taking the, 'Well this is my job. I'm the manager. I'm not going to play him.'" -Jim Bowden on the way Trea Turner has been used so far

"You've got a young kid that's developing, that you're pushing to the big leagues -- and I think he can play here now -- but he's not going to play coming off the bench. He's used to playing every day.

"So this is a guy that had a 35% on-base, was hitting over .314, he was stealing bases, he was playing really good defense, he can give you a spark at the top of the lineup. If you bring him up he goes right in the lineup and he starts.

"Then [Yunel] Escobar got hurt to make it easier for you to make this decision and he's still not playing.

"You know what it reeks [of] to me? It reeks to me that Mike Rizzo wanted to bring him up and Matt Williams didn't want him, so Matt's taking the, 'Well this is my job. I'm the manager. I'm not going to play him.'

Our resident GMs @JimBowden_ESPN & @Jim_Duquette don't understand what the Nationals are doing with Trea Turner https://t.co/rTxdYTZInK

"I mean, Matt Williams is on the hot seat anyway, and it's not just the media. I know he was absolutely backed by GM Mike Rizzo, which you have to do in that role. His job's in jeopardy. He's got a really good team that's playing .500 ball and has underachieved for five months. He's going to have to take responsibility if this team doesn't get to the postseason, so why in the world would you bring up Trea Turner and sit him?

"What are you going to sit him a week and then put him in there and then he doesn't do anything and you just say, 'I told you so,' and option him back out?"

"The issue is, where we're at in the standings right now, we have to put our best foot forward to win every single game..." -Matt Williams on the lineup he's fielding every day

After he was called up on Friday, Turner made his MLB debut late in the Nats' 10-3 loss to the Brewers. Since then he's made two pinch hit appearances, going 0 for 4 thus far after playing 10 games at Double-A in the Nationals' system and putting up a .314/.353/.431 line in 48 games and 205 PAs at Triple-A Syracuse once he was officially acquired in this winter's three-team deal with the San Diego Padres and Tampa Bay Rays in June.

In the meantime, Escobar came back this week, and Denard Span returned from the DL as well, further limiting the opportunity to get Turner a start.

Matt Williams was asked directly about the way Turner has been used when he appeared on the MLB Network Radio show "First Pitch" on Wednesday morning.

"Well he's been in three games so far," Wiliams said, "two from a pinch hitting perspective, one on a double switch in the seventh inning.

"We were playing light on the bench for a while and one less guy on the bench really kind of hamstrings you depending on what you want to do during the course of a game. But, I'm not sure exactly when we'll get a chance to see him start. I know he works hard every day. He's out early every day making sure he keeps as sharp as possible. It depends.

"The issue is, where we're at in the standings right now, we have to put our best foot forward to win every single game, that doesn't mean that Trea can't help us win, but Anthony is healthy and Yunel's back and [Ian Desmond] is playing well. So it doesn't necessarily bode well for him to start two-three games in a row.

"Trea's here because, one, he can get some experience. He's done everything at every level that he needs to do." -Matt Williams on Trea Turner getting called up to the majors

"We'll try to get him in there as much as we can. I know he's got great tools. He's got good speed. Plays shortstop and second base, so if opportunity arises for him, we'll get him in there and let him go. But I like his demeanor, I like his tools, I like the way he goes about his business, so we'll see what happens here in the coming days."

Asked later in the interview if there was pressure to put Turner in or if he was concerned about the lack of playing time affecting Turner's development, the second-year skipper noted that there wasn't much time in the minor league season anyway.

"Not at all," Williams said regarding the pressure. "Trea's here because, one, he can get some experience. He's done everything at every level that he needs to do. Again, he's a new player for us. We want him to get to know everybody, because hopefully in the future he's a valuable piece of our direction and our team.

"I liken it to Michael Taylor last year. Michael Taylor came up in September last year and got a chance to get a little taste of the big leagues, and then all-of-a-sudden this year he is thrust into the starting lineup because Denard is down. And the year that he's had, because he had some experience last year in September, I think that helped him with his success this year. So, it's a little bit of the same direction with Trea.

"Everybody wants to get to know him. His minor league season would have been over very soon anyway, and to give him some opportunity at the big league level will do nothing but help him. 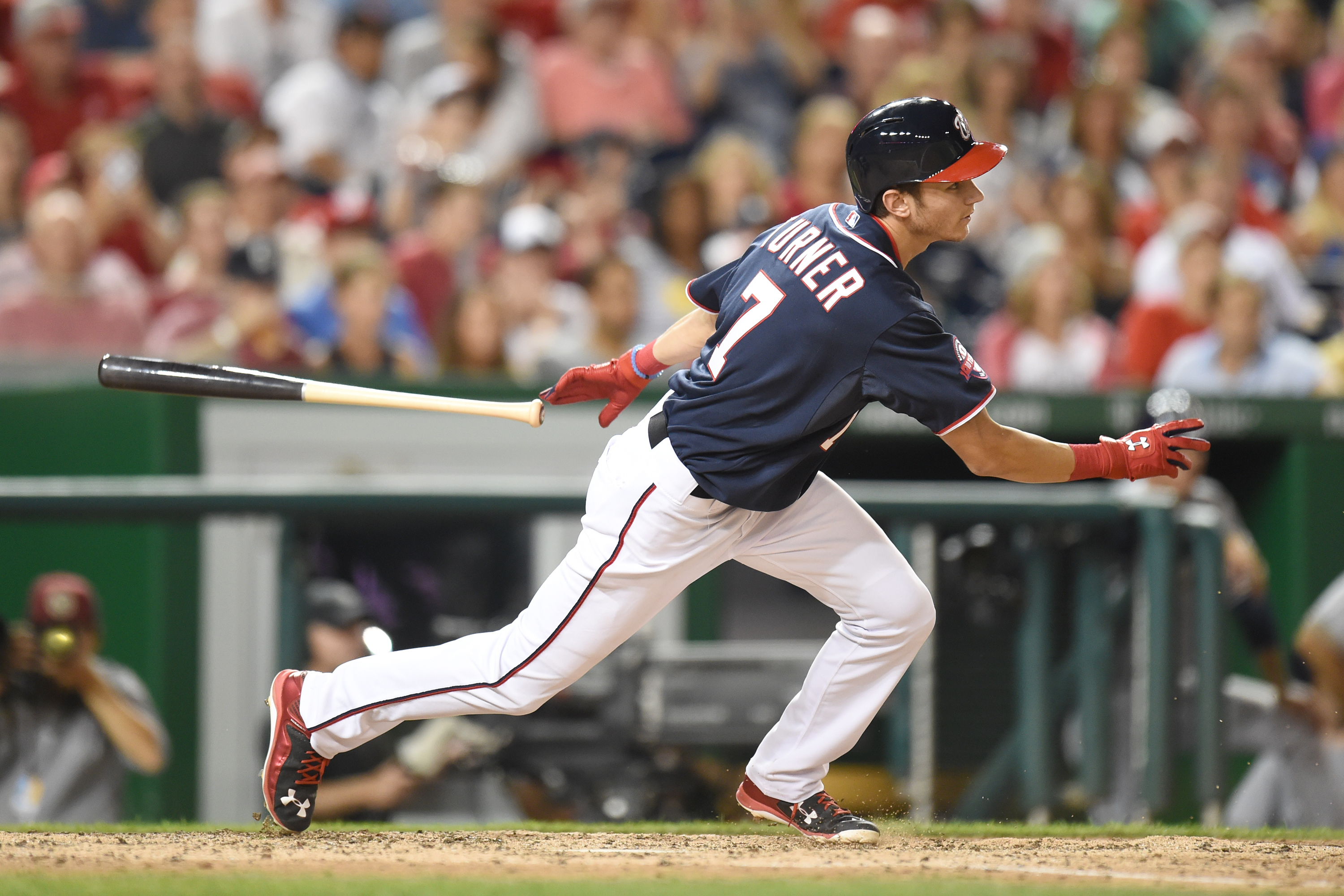 "On the other side of that coin, he's really valuable to our team. Listen, if we're late in a game and we need a stolen base, he can do that. He's got a really nice swing if we need a pinch hit with guys in scoring position late in the game, he can do that too, and he can start. So he provides a lot of things for our team.

"And so, we think about it, "Okay, we've got to bring a guy up and start him.' Well, that simply isn't going to happen right now because Ian's playing so well, because we've got a chance to get back in this thing and we're going to try to win today's game and I've got to put the best foot forward every single day with our guys to try to win tonight and see what happens tomorrow."

The Nationals are 6.5 games back after last night's loss. If they fall further back in the division will they find more time for Turner over the next month? With Ian Desmond likely to leave as a free agent after this season, unless things turn around between now and the end of the 2015 campaign, does it make more sense for the Nationals to see how the infielders who are expected to be here next year can work together?