Trea Turner is still hitless in his major league career after going 0 for 3 last night vs Miami in his first MLB start, but the 22-year-old infielder showed off his speed, glove and range in the Washington Nationals' 4-3 loss to the Marlins.

In discussing the fact that top infield prospect Trea Turner was up in Washington but not starting in an MLB Network Radio interview this week, Matt Williams explained his thinking in sticking with the Nationals' veteran infielders.

"The issue is, where we're at in the standings right now, we have to put our best foot forward to win every single game," Williams said.

"That doesn't mean that Trea can't help us win, but Anthony [Rendon] is healthy and Yunel [Escobar's] back and [Ian Desmond] is playing well. So it doesn't necessarily bode well for him to start two-three games in a row."

"Good range. The one pop-up that he went and got. He's got a lot of speed so he was able to go get that one." -Matt Williams on Trea Turner in his first MLB start

With Yunel Escobar sitting out with a swollen right hand after yet another hit-by-pitch, Denard Span on the DL and Michael Taylor resting a sore right knee after a collision with the center field wall on Friday, Turner finally got the opportunity to make his first major league start last night in the series opener with the Miami Marlins since Nats' infielder Danny Espinosa started in left against southpaw Adam Conley.

"It gives [Espinosa] opportunity to get in the lineup and hit from the right side, which is important," Williams told reporters, as quoted by the Washington Post's James Wagner.

"It provides us a little more thump in the lineup with Yunel gone. It [also] gives Trea an opportunity to go out there and make his first start as well."

Though he went 0 for 3 in the Nationals' 4-3 loss, leaving him 0 for 8 thus far in his major league career, Turner did show off his speed and glove in his seven innings on the field, with a few highlight worthy plays, one of which even received the Statcast treatment:

"The one pop-up that he went and got. He's got a lot of speed so he was able to go get that one. I think he handled himself just fine."

Nationals' shortstop Ian Desmond, whose position Turner might (probably will) fill when/if Desmond leaves via free agency this winter, was impressed with the next-gen Nats' infielder's range on the pop fly and a few other plays.

"I know from experience when you play short your whole life and you go to second and you have to catch that fly ball down the right field line, everything spins opposite," Desmond said. 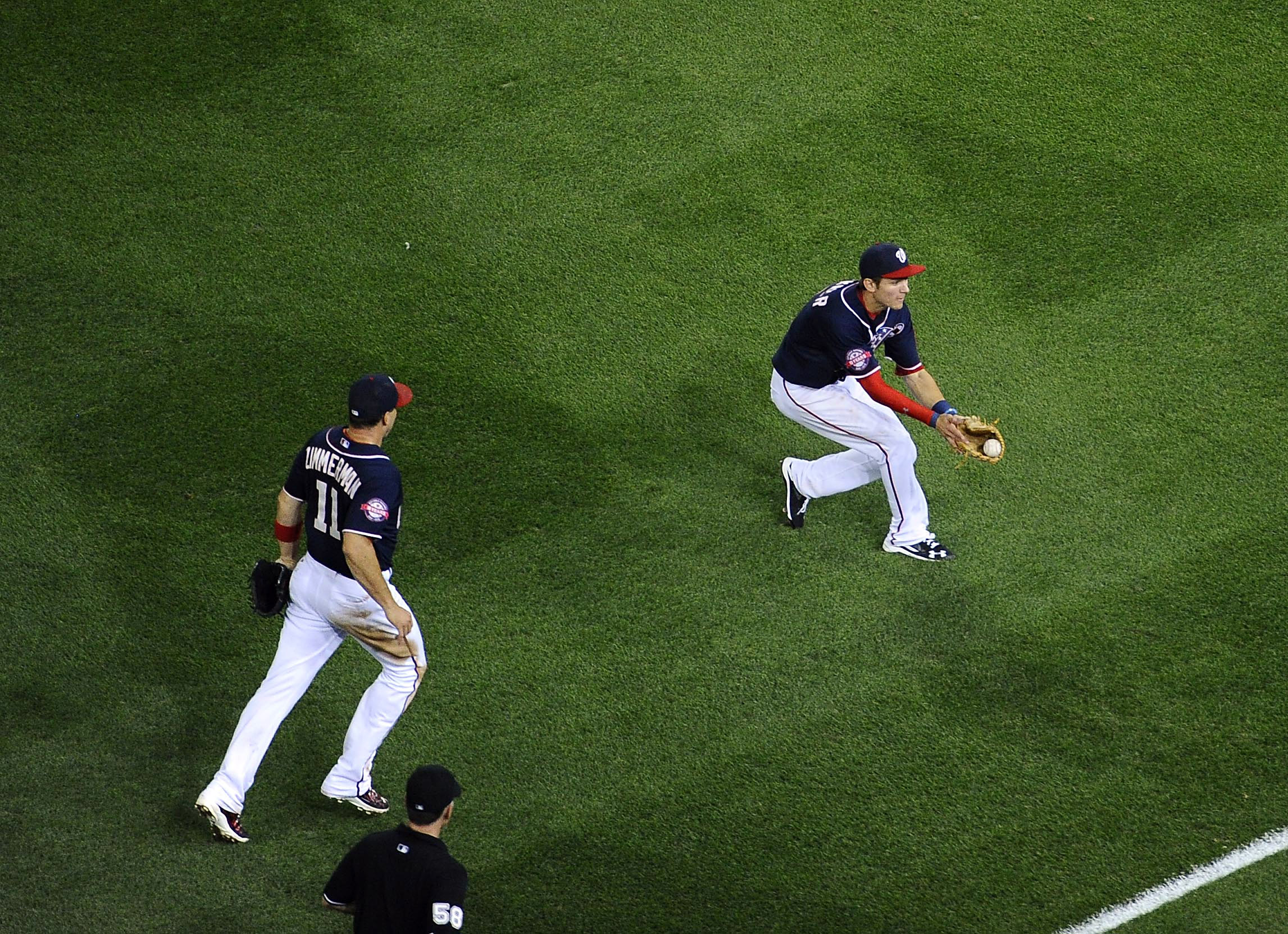 "I know that play is a lot harder than he made it look and he ran a heck of a long way, so that was good and the next one was good too, but the play he spun in the hole on the grounder, he looked great, he's got it. I can't wait for him to get his hit and I want to watch him run. He's a fast little whippersnapper."

On the Justin Bour grounder in the third Desmond was referring to, Turner ranged to his left, picked up the ball two steps onto the outfield grass and made an on-target spinning throw to first for the final out of the frame.

It didn't get Statcasted (is that a word now, or can it be?), but it was equally impressive.

Will he get another start tonight? Will he get his first major league hit? Will we ever get tired of seeing that speed?