Doug Fister is moving to the bullpen when Stephen Strasburg returns and Joe Ross, acquired by the Washington Nationals this winter along with shortstop prospect Trea Turner, will remain in the Nats' rotation. Surprised? You shouldn't be...

Share All sharing options for: Nationals' starter Joe Ross earned his spot in the Nats' rotation

The Arizona Diamondbacks stacked their lineup with left-handed hitters, trying to take advantage of the early splits Joe Ross has put up thus far in his major league career.

Five of the D-Backs' nine hitters in the starting lineup series finale in the nation's capital were left-handed or switch hitters.

"I thought he threw all of his pitches well, for strikes when he needed to. Worked quickly. Again, continues to pitch well for us." -Matt Williams on Joe Ross vs the D-Backs

Four of the five hits Ross allowed in what ended up an 8-3 win for the Nationals were hit by left-handers, with the one run he allowed coming on a solo shot to right by left-handed hitting Diamondbacks' first baseman Jarrod Saltalamacchia, but for the most part, the Nationals' rookie starter kept the opposition in check throughout his six innings of work on the mound in Nationals Park.

"He was in command," Nats' skipper Matt Williams said. "He gave up the homer to Salty, but that was it. I thought he threw all of his pitches well, for strikes when he needed to. Worked quickly. Again, continues to pitch well for us."

Williams also discussed what Ross was able to do against the left-handed hitters the D-Backs lined up against him.

"I think the changeup is key for him and the breaking ball is key for him," he said. "Certainly fastball command has to be there, but he hit the outside corner, didn't give them much to pull, used the back-foot breaking ball a couple of times for strikes. I think he was in command. He just went out there and made his pitches."

"We've seen so far that he doesn't walk a whole lot of guys and makes them put the ball in play and that's important." -Matt Williams on Joe Ross attacking hitters

The success Ross has enjoyed since his somewhat surprising call up from Double-A Harrisburg in June, his willingness to throw strikes, and his composure on the mound have impressed his manager.

"It's rare," Williams said. "But he understands that if he makes pitches, he's got a chance to get them out. We've seen so far that he doesn't walk a whole lot of guys and makes them put the ball in play and that's important. His ball's got good late movement on it, on his fastball and a good slider to go along with it, for strikes when he needs it and out of the zone when he needs to get a swing and miss too."

Ross has been strong enough that the Nationals announced yesterday that they made the decision to keep him in the rotation, with veteran right-hander Doug Fister moving to the bullpen for now, with Stephen Strasburg coming off the DL on Saturday.

When he was acquired this past winter, in the three-team trade with the San Diego Padres and Tampa Bay Rays which saw the Nationals send Steven Souza and minor league pitcher Travis Ott to the Rays and receive Ross and shortstop Trea Turner from the Padres, Baseball America's John Manuel wrote that the move "was a master stroke," by Nationals' GM Mike Rizzo, on par with getting, "Doug Fister for spare parts from Detroit," and, "Wilson Ramos for Matt Capps from the Twins."

The acquisition of Ross and Turner for Souza and Ott, Manuel wrote, "may be the best one."

Manuel ranked Ross fourth among all the prospects traded between the Winter Meetings and holidays this winter, behind only Turner, Souza and LHP Max Fried, who went from San Diego to Atlanta in the Justin Upton trade:

"Ross has athleticism, a big-time fastball and decent feel for how to mix four pitches. He’s 21, has reached Double-A and has big league bloodlines with his brother Tyson."

Former Nationals' GM Jim Bowden listed Ross second on a list of his "Five hidden gems in offseason trades," in an article after the trade, writing that his 92-94 mph fastball has, "riding life and can touch 97," his slider is a "power breaking ball" and, "... once he improves his changeup and overall command, watch out."

Ross to remain in Nats' rotation, Fister to 'pen 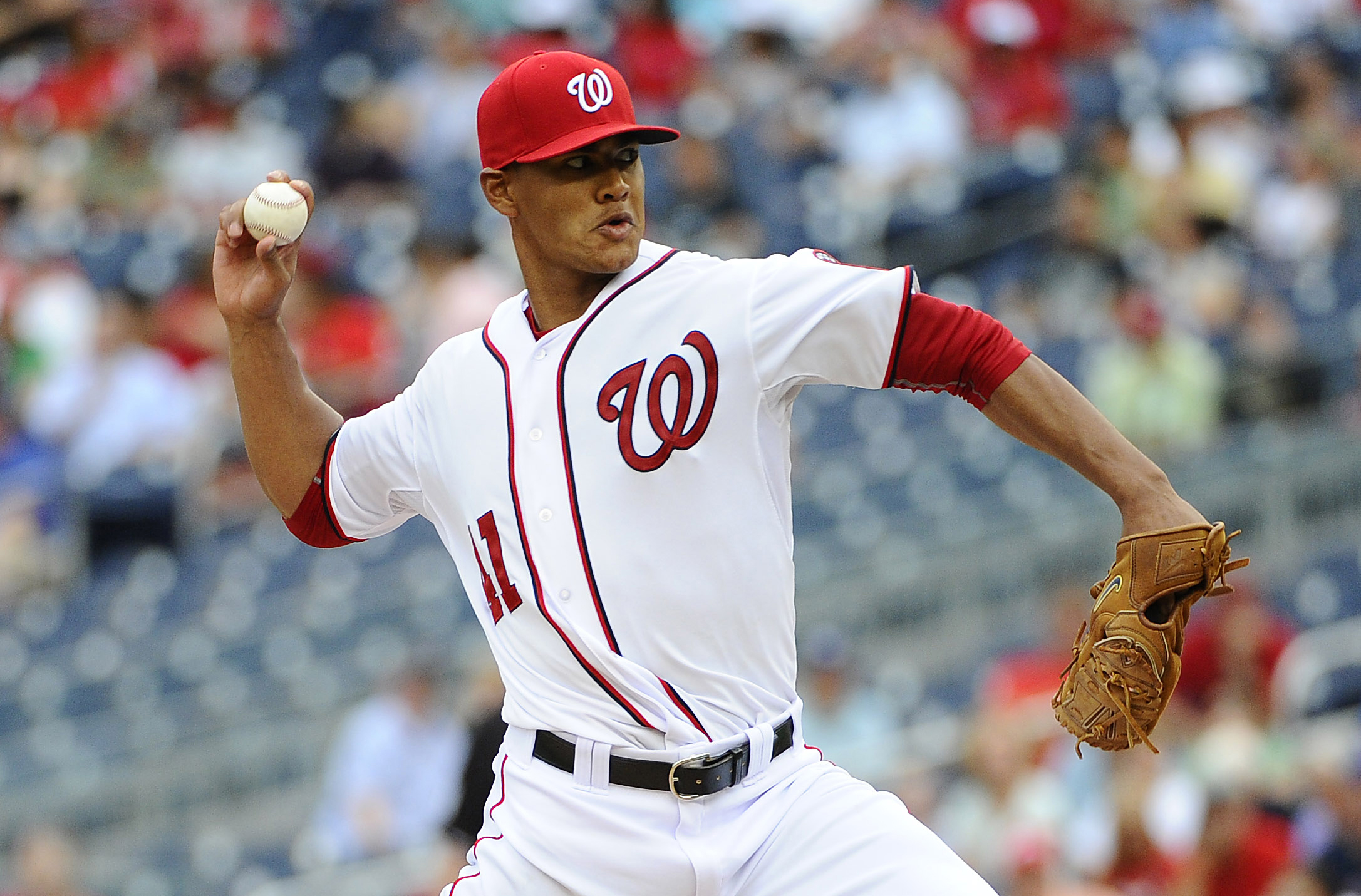 He's on an innings limit this year, though the Nationals haven't said just how far they'll take him this season, but the decision they made yesterday to stick with him over the struggling Fister says a lot about what they think of his work.

Trea Turner, who has put up a .322/.372/.468 line with 21 doubles, seven triples and eight home runs in 105 games and 447 plate appearances between Double A (with San Diego and Washington) and Triple-A in the Nats' system so far this season, may end up being the Nationals' shortstop of the future, but right now Ross alone is making this winter's trade look like another steal for Mike Rizzo, who may find himself getting his phone calls ignored by fellow GMs if he keeps this up.