Jayson Werth on Nationals' 8-7 win: "This game is kind of indicative of our season."

Blown leads. Blown saves. The Washington Nationals' series opener with the Philadelphia Phillies was indicative of the way the entire season has gone for the Nats, at least according to Jayson Werth, who homered twice in what ended up an 8-7 win.

Share All sharing options for: Jayson Werth on Nationals' 8-7 win: "This game is kind of indicative of our season."

Jayson Werth grounded out in his first at bat on Monday night in Citizens Bank Park, but the 36-year-old former Phillies' outfielder came up with the bases loaded and two out in the fifth and hit the 58th home run of his career in Philadelphia, taking an 0-2 fastball from rookie right-hander Aaron Nola for a ride to left for his fifth career grand slam.

The blast extended Werth's current on-base streak to 23 games, over which he was 27 for 90 at that point (.300 AVG), with seven doubles, five home runs and 16 runs scored over the course of the streak, which stretches back to August 21st.

"This game is kind of indicative of our season a little bit. We scored some runs and then we gave the lead back and kind of back and forth." -Jayson Werth on win over Phillies, Nats' 2015 campaign

Werth's eighth home run of the year gave Washington a 6-2 lead in the series opener, but Nationals' starter Jordan Zimmermann gave it back in the bottom of the sixth.

The game went to extra innings tied at 6-6, before Werth put the Nats ahead again with a one-out solo home run to left-center off right-hander Dalier Hinojosa that momentarily put the Nationals back up, 7-6, before closer Jonathan Papelbon came on for the save in the bottom of the inning and gave up a solo home run to right field by Freddy Galvis that tied things back up.

Werth grounded into an inning-ending double play in the eleventh, but that was after the Nationals went ahead 8-7 on a grounder to second off Yunel Escobar's bat that brought Danny Espinosa in from third for what ended up being the winning run.

Werth finished the night 2 for 5 with the two home runs and five RBIs.

"It's been really good," Nats' skipper Matt Williams said when asked about Werth's recent run of success at the plate.

"Tonight, he got behind a couple of strikes on a couple of curveballs and then hit the fastball for the grand slam and then got another one for his second homer. He's been swinging good."

It was another sign that the power that was missing when he returned from 60 games on the DL with fractured bones in his left wrist has come back.

Werth hit in the cleanup spot for the third straight game after enjoying success in a run as the Nats' leadoff man.

"It's nice to see him healthy," Williams said. "I know he's feeling much better and it gives us an opportunity to put him behind [Bryce Harper] the way he's going too so it gets him some pitches to hit as well."

"We hit and we don't pitch, we pitch and we don't hit. It was good to be on the winning side of this one, but it's kind of really just kind of the story of our season." -Jayson Werth on Monday's win over the Phillies on Monday

Werth told reporters, including Washington Post writer James Wagner, that it was a good win, but not much cause for celebration:

"It would feel great if we weren’t 9 1/2 games back. You get the sense it’s too little too late," Werth said.

"Anything can still happen of course, but it’s been a tough go. We didn’t stay healthy. Like I said, this game’s a perfect example. We hit, we don’t pitch. We pitch, we don’t hit."

Williams told reporters last week, after the Nationals' third straight loss to the NL East-leading New York Mets in D.C., that Werth and infielders Anthony Rendon and Ryan Zimmerman did finally come around offensively after returning from their respective DL stints, but it took longer than they hoped.

"It took them a while," Williams said, "but again, they're very productive players, all three of them, and vital parts of our team. Sometimes when you come back from a rehab it takes a little while to get going, but they've all done it."

The second-year skipper said tonight that he didn't spend any time wondering what might have been if they stayed healthy, especially seeing now what Werth and Rendon (who went 4 for 6 with a home run last night) can do when they are back, or at least close, to full strength.

"We can't think about that because it's not a reality," he said. "They're healthy now. We need to play well the rest of the way."

Nationals 8-7 over the Phillies in extras in CBP 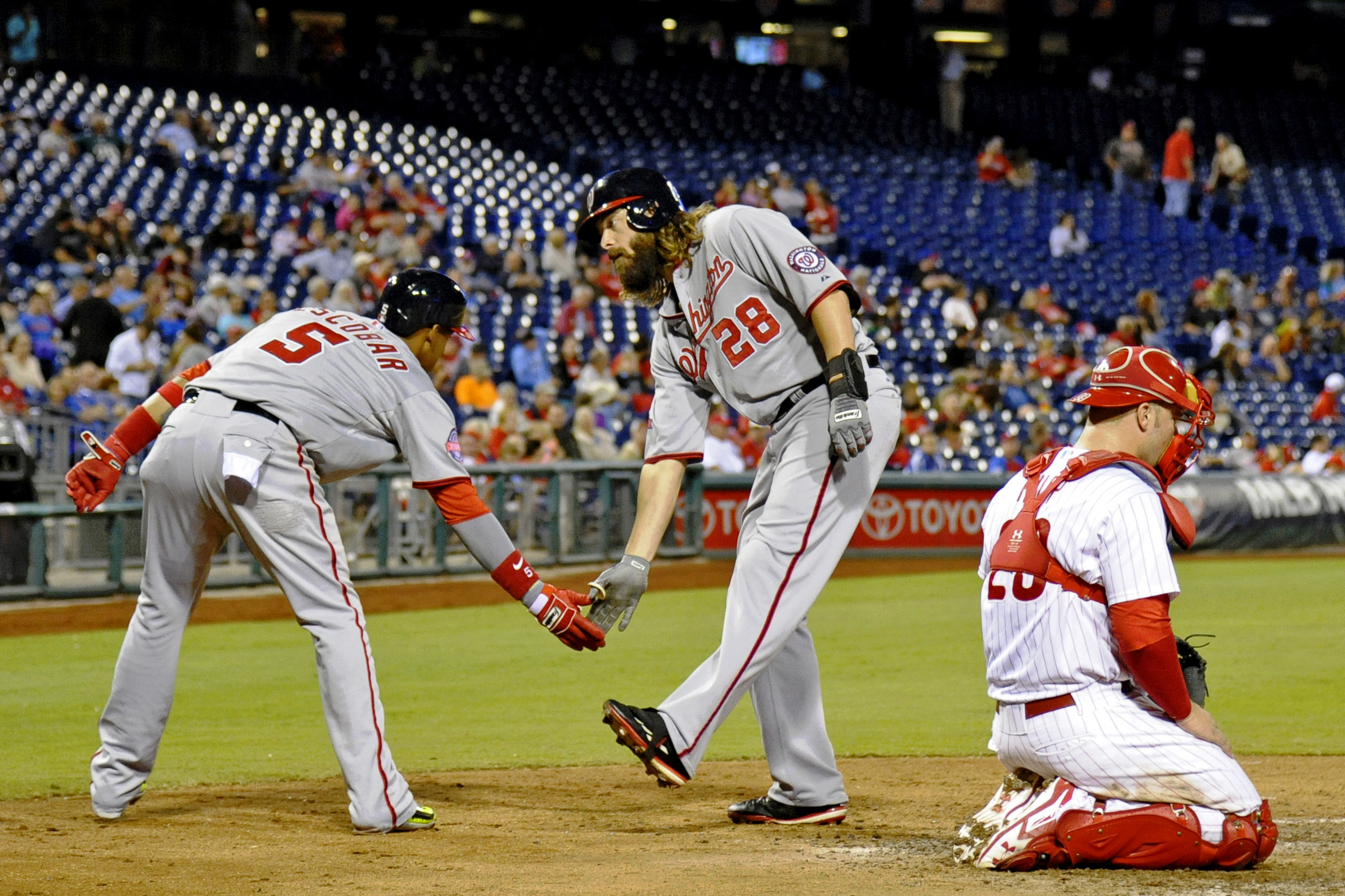 The Nationals' 73rd win in their 143rd game of the season didn't get them any closer to first, since the Mets won their eighth straght, 4-3 over the Miami Marlins.

Werth and the Nats fought through the blown leads to take the series opener with the Phillies, but as Werth put it, the way they had to fight for the win can be seen as a microcosm of the 2015 campaign.

"This game is kind of indicative of our season a little bit," Werth explained. "We scored some runs and then we gave the lead back and kind of back and forth. It seems like all year we hit and we don't pitch, we pitch and we don't hit. It was good to be on the winning side of this one, but it's kind of really just kind of the story of our season."