Washington Nationals' right-hander Drew Storen's 2015 campaign ended after his rough outing against the New York Mets last week in the nation's capital, when the 28-year-old right-hander injured his thumb slamming his locker shut.

It's understandable that the focus won't, in the end, be on the way the 2015 campaign began for 29-year-old reliever Drew Storen, given how the Washington Nationals' right-hander struggled in the last month-plus and the fact that he suffered a season-ending injury slamming his locker shut after another rough outing against the New York Mets last week.

The non-displaced fracture in his right thumb that Storen suffered brought an end to his sixth season with the Nats, and, if you believe what Washington Post columnist Thomas Boswell and others have written in a few recent weeks, Storen's time in the Nationals' bullpen.

"He's a competitor and he was frustrated and made a mistake, so he's got that fracture and there's not much we can do about it now." -Matt Williams on Drew Storen injuring his thumb

In what he described as an early "autopsy" of the many things that went wrong and contributed to the Nationals' frustrating season last month, Boswell wrote that what Washington was left with at that point was, "a silent locker room, throats full of the gall of squandered wins," some players who are on the way out as free agents and struggling veterans doing what they could to keep hope alive, and, "... a demoted, dissatisfied Drew Storen wanting a trade that he will almost certainly get this winter."

He reiterated that point after Storen came on in relief of Stephen Strasburg last Wednesday and left a 1-0 slider up in the zone for Yoenis Cespedes, who hit a two-run home run out to left field to put the Mets up 4-2 in what ended up a 5-3 win that gave New York a sweep of the three-game set in D.C.

"Storen was almost certainly going to be traded this winter," Boswell wrote in the immediate aftermath of the game.

NatsInsider.com's Mark Zuckerman noted that Storen did request a trade after the deal, "... but general manager Mike Rizzo wouldn’t grant it in-season," though, Zuckerman wrote, the "... assumption all along, though, was that the Nationals would revisit the matter over the winter, with Storen likely to be traded."

That followed a stretch, immediately after the Nationals' acquisition of closer Jonathan Papelbon, in which Storen, pitching in the eighth inning, threw five scoreless and hitless innings.

His frustration got the best of him and he injured his thumb after the loss to the Mets, which left the Nationals 7.0 games back in the division. He revealed the injury to the Nationals this weekend in Miami.

"[He] was a little bit inconsistent with his command and with his stuff and just fell into a rut and it seemed like he couldn't get out of it." -Mike Rizzo on Drew Storen's struggles in recent weeks

"He got here," Nats' skipper Matt Williams told reporters on Saturday. "His thumb is pretty swollen up.

"So he tried to go out and throw and couldn't really be effective doing it, and came and spoke to us about it and then we got an X-ray yesterday and it showed the fracture."

Asked about Storen's state of mind after the season-ending injury, the second-year skipper said it was a mix of regret and embarrassment.

"Regretful that it happened and a little bit embarrassed about it, of course," Williams explained.

"He's a competitor and he was frustrated and made a mistake, so he's got that fracture and there's not much we can do about it now."

"But makes it tough on his teammates. It hurts the team. We went through this a couple of years ago with a relief pitcher and it really affects the other bullpen members.

So it's unfortunate and we're not too happy about it, but Drew is a competitor and unfortunately he chose a route to let his frustration out that affects the ballclub."

In discussing what went wrong for the right-hander after Papelbon's acquisition, or at least in the weeks that followed the trade, Rizzo said Storen just couldn't make the necessary adjustments to fix what was wrong.

Williams said the same after what will end up being Storen's final appearance of the season last Wednesday.

He told reporters then, before the thumb injury was revealed, that he didn't think it was anything physical bothering the reliever.

"This game is kind of indicative of our season..." - Jayson Werth 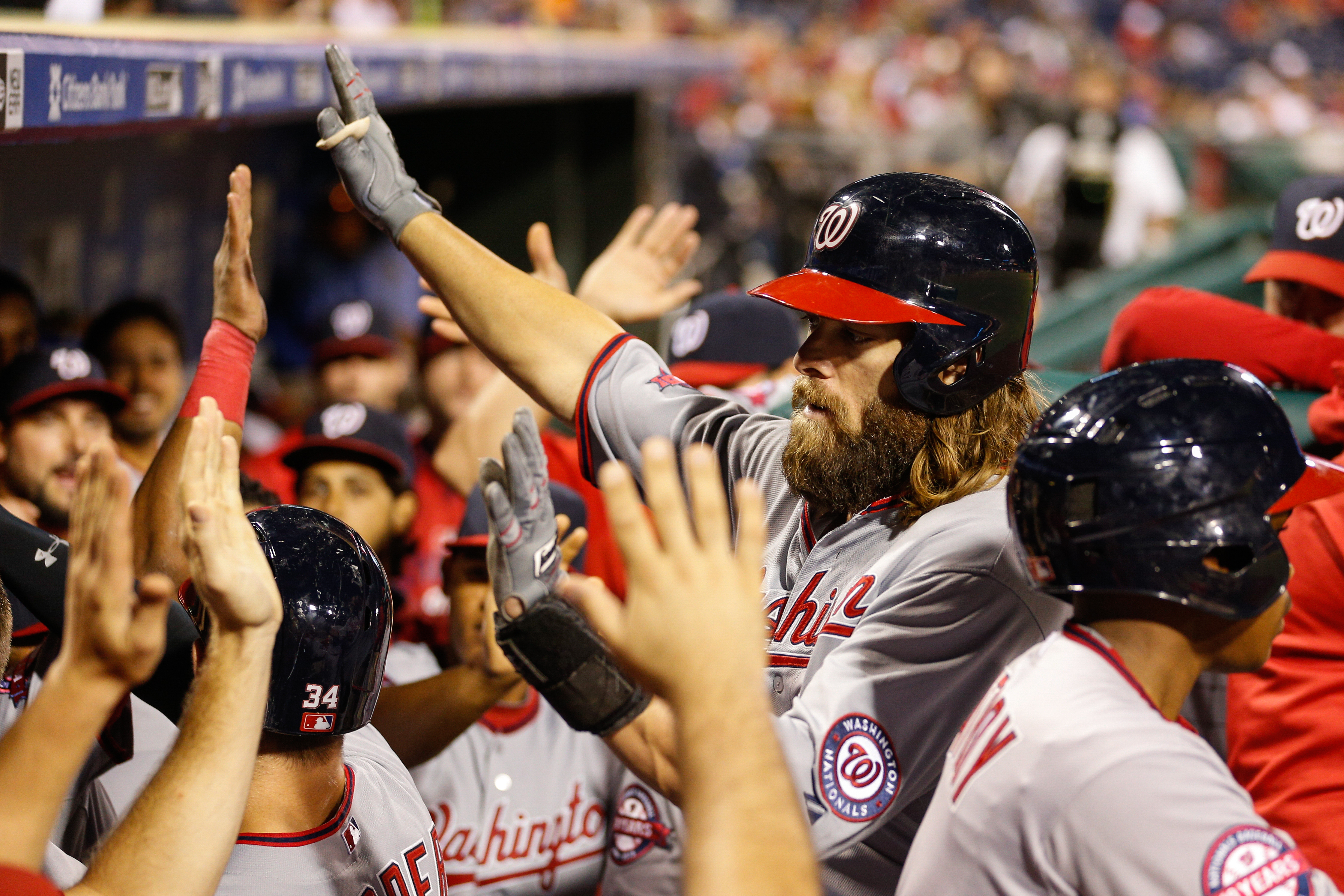 "It's a game of adjustments and his role was adjusted and early on the adjustment worked fine," Rizzo said this past weekend.

"He threw great I think the first five or six times that he was setting up for Jonathan and since then he was a guy that was a little bit inconsistent with his command and with his stuff and just fell into a rut and it seemed like he couldn't get out of it."

Will Storen get a fresh start with another team next season?

Will the Nationals trade him and accept what they can get for the right-hander, whose value was likely diminished significantly by the last month on the mound and the injury to his pitching hand?

Storen avoided arbitration and agreed on a 1-year/$5.7M with the Nationals last January. He's a free agent after the 2016 campaign, so any team that acquires him would be getting just one year of team control.

Is there any possibility that Storen is a part of the Nats' 'pen on Opening Day in 2016?