Washington Nationals' right-hander Stephen Strasburg struck out 14 of the 26 batters he faced in eight scoreless innings in which he limited the Philadelphia Phillies to just one hit. It was vintage Strasburg on the mound in Citizens Bank Park.

Share All sharing options for: Stephen Strasburg strikes out 14 in Nationals' 4-0 win over the Phillies

Stephen Strasburg matched his career high in strikeouts with 14 on Tuesday night in Philadelphia, one start after the '09 no.1 overall pick struck out 13 New York Mets in 7 ⅓ innings pitched in Nationals Park, but as impressive as the strikeout total was the total number of swings and misses the 27-year-old right-hander got from the Phillies' clearly-overmatched hitters.

Strasburg's 30 swings and misses were the third-most in the last ten years, as ESPN's Stats & Info Twitter account noted after the game, behind only Clayton Kershaw (35 swings and misses) and Johan Santana (32).

Strasburg got ten swings and four misses with the 21 two-seamers he threw, according to BrooksBaseball.net, with neither of the two put in play going for hits.

"He established low fastball, didn't used his changeup until about the fourth inning, but when he establishes low fastball he gets a lot of swings and misses on the changeup..." -Matt Williams on Stephen Strasburg vs the Phillies

He got 13 swings and misses with the 42 four-seamers he threw, with none of the five put in play good for hits.

He got 13 swings and 10 misses on the 21 changeups he threw and nine swings and three misses with 21 curves, with one of the three breaking balls put in play going for the only hit he allowed in eight scoreless innings.

Strasburg threw 105 pitches total, 77 for strikes, and gave up just one hit and one walk in what ended up a 4-0 win.

"I think that the biggest thing is he established low fastball, didn't use his changeup until about the fourth inning, but when he establishes low fastball he gets a lot of swings and misses on the changeup too.

"And then innings four-through-eight, used the changeup a lot and got a lot of guys to swing and miss at it. He was really good."

Andres Blanco on Strasburg. 'Nolan Ryan. I saw that on TV when I was a kid. Whew.'

Bryce Harper, who hit two home runs in the win, said the same about the importance of Strasburg establishing his fastball first and working off that.

"When he establishes that heater, early in the game, down in the zone and then throws off that changeup, it's lights out," Harper told MASN's Dan Kolko. "There's nothing more you can say. He's unbelievable out there.

"That's a guy you want out there every five days and he's one of our horses, so to be able to go out there and do what he did tonight was pretty special and definitely good for us."

"Stephen has had a frustrating year with all the mini-setbacks he's had," Williams continued, referencing the ankle, back and oblique issues the starter has dealt with going back to Spring Training.

"When he establishes that heater, early in the game, down in the zone and then throws off that changeup, it's lights out..." -Bryce Harper on Stephen Strasburg vs the Phillies

Williams was asked if the improvement he's seen and the progress Strasburg has made along the way was building toward a start like tonight's?

"I think he's healthy, one, that helps," Williams said.

"There's no issue with the back, there's no ankle issue, and he feels good when he goes out there, so I just think he was just in command the whole night, throwing it from the first pitch where he wanted to."

Last time out it was the curveball that was devastating as Strasburg struck out thirteen Mets. He threw 35 curves in that outing, but just five changeups.

Tonight the changeup was a well-nigh unhittable pitch, which the Phillies' hitters never quite saw coming.

"I think it's a feel," Williams explained when asked about Strasburg going with one offspeed pitch over another.

"Any pitcher that goes out there doesn't necessarily use all their pitches all the time. But the last start at home, the curveball was really good. Tonight the changeup was especially good. 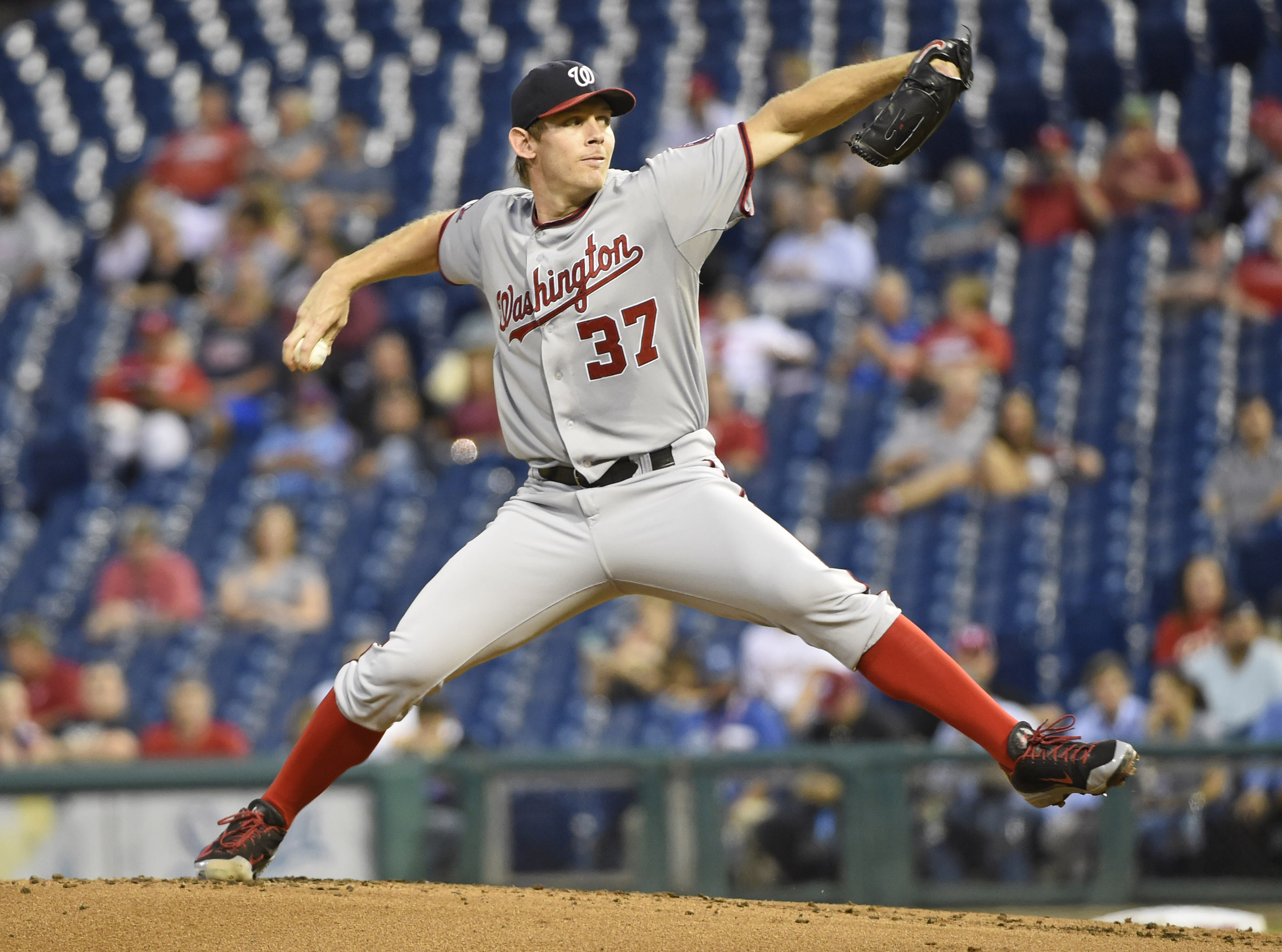 "Again, I think it's establishing fastball, low command to both sides of the plate to begin with, and that, for any hitter, that puts them in swing-mode and as it leaves his hand it looks like a fastball."

Philadelphia's hitters couldn't pick it up, so Strasburg kept throwing it. He was done for the night after recording one last strikeout in a quick, ten-pitch, seven strike frame.

Strasburg lost his no-hit bid in the fifth, but Williams said if he'd kept it going, he would have sent the righty back out for the ninth, but he didn't have to make that decision.

"If he's got a no-hitter, he's definitely going out there," Williams said, "but again, if he gets a guy on, we're thinking about going to get him in that situation anyway, and if not he's going to run past 120 [pitches]. Coming off all he's come off of, he gave us plenty tonight."