Bryce Harper wasn't the only Washington Nationals' player swinging a hot bat in Citizens Bank Park, but he made headlines by hitting his 40th of the season in the third game of three with the Philadelphia Phillies on Wednesday.

Washington's three and four-hole hitters, Bryce Harper and Jayson Werth, were a combined 12 for 26, for a .462 AVG, with eight homers, four each, four walks, two each, and ten runs scored, five each, over the last three days in the Nationals' sweep of their three-game set with the Philadelphia Phillies in Citizens Bank Park.

Harper hit home runs nos. 37-40 on the year, one on Monday, two on Tuesday and another last night, while Werth hit nos. 8-11 in the ballpark he once called home, two each in the opener and finale against the Nats' NL East rivals.

"I don't see how the top player in the league that has dominated offensively and defensively as much as he does does not get the award." -Mike Rizzo on #HarperMVP on 106.7 the FAN in D.C.

Harper, with his 40th, became the just the second player in the current Nationals' history (2005-present) to reach that plateau, with Alfonso Soriano (46 in 2006) the only player to hit more in a single season in "franchise" history.

Harper has to hit eight more to best Frank Howard, whose 48 HRs with the Senators in 1969 are the most in a single season in D.C. baseball history.

Two more and Harper will move into a tie for second with Senators' sluggers Harmon Killebrew (42 in 1959) and Roy Seivers (42 in 1957) for second on the list among all ballplayers from the nation's capital.

Harper, 22, joined some heady company league-wide last night too, becoming just the sixth (or seventh*) player in Major League history to hit 40 at age 22 or younger, leaving him seven behind Eddie Matthews, whose 47 as a 21-year-old with the Milwaukee Braves in 1953 are the most all-time in a single campaign by a 22-or-younger-year-old.

Harper received the silent treatment from his teammates after he hit a 92 mph 0-1 fastball from Phillies' righty Justin De Fratus out to right for a towering 378 ft blast that landed in the first row above the out-of-town scoreboard after a 6.8 second journey.

"Yeah, I came in and guys from the cage came up and hugged me and things like that, but the guys in the dugout just gave me the silent treatment and then were very happy for me after," Harper told reporters.

"He deserves the silent treatment like he got," Nats' skipper Matt Williams deadpanned after what ended up a 12-2 win over the Phillies.

"It's pretty special," Williams said of Harper's accomplishment. "Again, that's a special talent. He really didn't click that ball, but got enough of it and he's swinging good, he's seeing the ball good. Just want him to continue doing that."

"Being pitched to helps, and him getting balls up in the strike zone, so he's been able to attack the ball up a little bit more, which is automatic elevation for the ball to carry." -Matt Williams on Bryce Harper's recent stretch at the plate

The home run was Harper's ninth in 15 games in September, (over which he's 20 for 48, .417 AVG), leaving him with a major league leading (in all three categories) .338/.467/.670 line on the year and the most home runs by any hitter in the National League so far this season and the second-most league-wide, behind only the Orioles' Chris Davis and the Mariners' Nelson Cruz, who have both hit 42.

It's all about the approach he's had all season according to his manager, who reached 40 home runs just once in his own 17-year career, as a 28-year-old in 1994.

"The concentration is about getting base hits," Williams explained. "Home runs come on pitches that you can hit a home run with. So, again, being pitched to helps, and him getting balls up in the strike zone, so he's been able to attack the ball up a little bit more, which is automatic elevation for the ball to carry."

Harper's getting some pitches to hit, in his mind, at least in part because Werth's been on such an impressive run over the last few weeks.

"I love him hitting behind me, I'll tell you that," Harper said. Both Williams and Harper talked about what Werth is able to contribute on and off the field.

"Off the field, it's a veteran guy that's been through the wars, understands it," Williams said.

"On the field, he does a lot of things. Regardless of where he hits, whether it's leadoff lately, or back in the four-hole, he's got the ability to drive a ball.

"He's become a superstar player right in front of our eyes..." -Jayson Werth on Bryce Harper

"He'll take a walk. He can cut down and drive a run in as we've seen lately, hitting the ball back through the middle. So he understands the game, understands the situation and how to hit."

"He's one of my best friends in here," Harper said. "He's like a brother to me, so being able to see him do what he's doing right now is very special.

"To see him come into Philly and do that. I love seeing him do that here, especially, because they boo him and things like that. It's pretty fun to see. And he's unbelievable inside the clubhouse, unbelievable out on that field, he brings a lot to the table and we're very thankful to have him."

Werth was equally effusive in his praise of Harper, and the 2010 no.1 overall pick's evolution this season.

"He's become a superstar player right in front of our eyes," Werth said, as quoted by the Nationals on Twitter.

"I’ve said before, when he’s 30 years old he’s gonna be a hell of a player," Werth told reporters in Philadelphia, including Washington Post writer Chelsea Janes.

Harper was more interested in talking about the Nationals' sweep than his 40th home run. 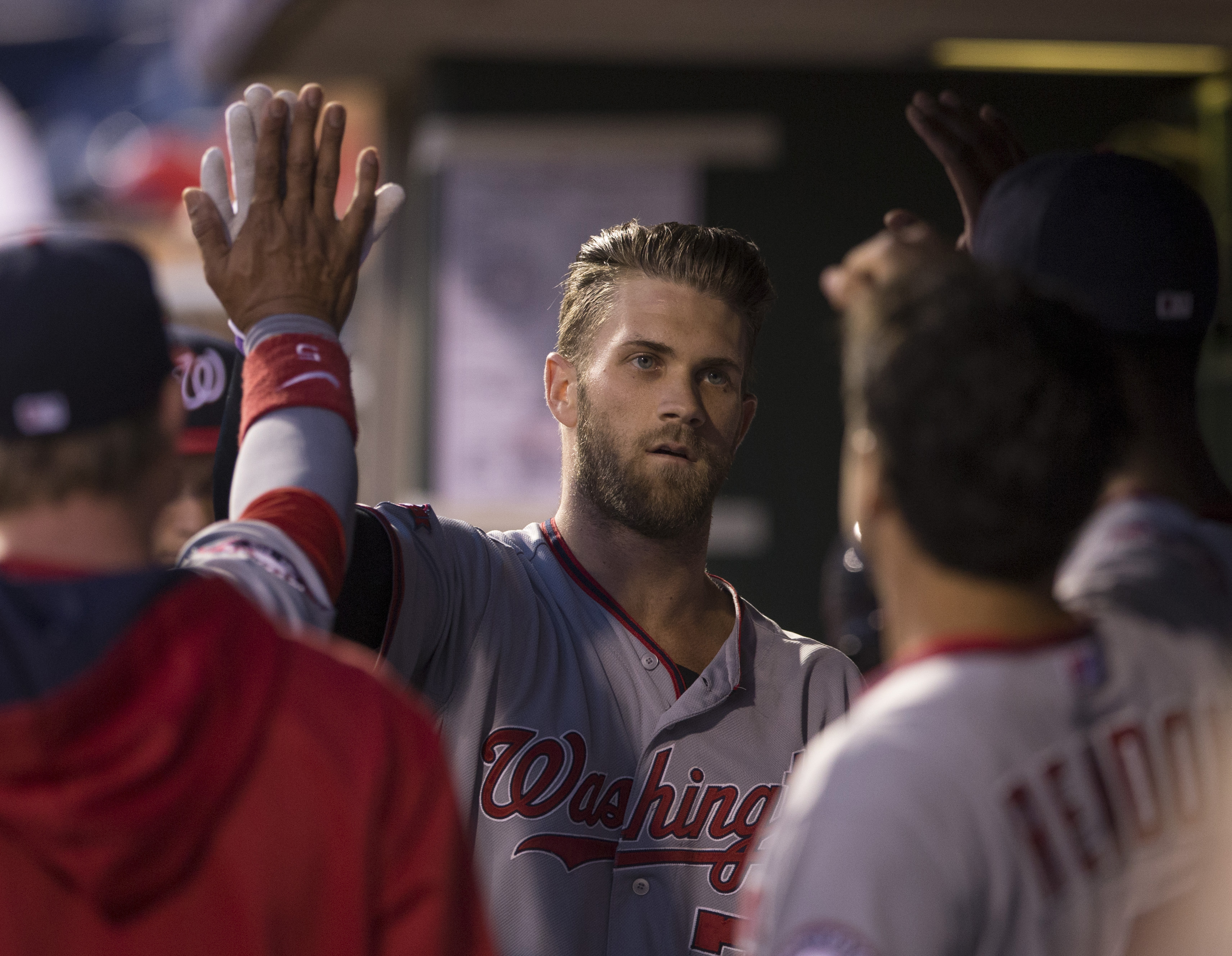 "I'm just excited we won that game tonight," he said, after the Nats' fourth straight win. "Very excited the way we're playing right now. Coming in here and doing what we need to do as a team to win the ballgame and win the past three nights. Our lineup is very good right now. Everybody is swinging the bat well, from top-to-bottom, and our pitching showed out and did what we needed to do."

Things are going so well for Harper these days that a Phillies fan even graciously returned his 40th home run ball after making a one-handed catch with a conveniently gloved hand.

"He just threw it to me," Harper explained, in detailing how he ended up getting it back.

"The fan threw it down, and he had a pen, so I signed one of the balls for him and threw it back up to him and he threw it to me and got the ball, so I'm thankful for that and it's pretty cool to have that kind of ball."

"They're great fans here," Harper said of the fans in Citizens Bank. "They understand the game and get the game and I'm very thankful for that."