"You're supposed to limit the damage done and I didn't do my job today," Tanner Roark told reporters after the Washington Nationals dropped the series opener of their four-game set with the Miami Marlins.

Tanner Roark made five starts in late May to mid-June when a flexor tendon issue landed Doug Fister on the DL.

Roark returned to the Washington Nationals' bullpen after that stint as a starter, though he made one more start on June 28th in Philadelphia, but for the most part, before he returned to the rotation this month, he was a reliever, pitching in the middle innings, the sixth, seventh, eighth, ninth, or wherever he was needed, a year after a (15-10), 3.2 fWAR season in the Nats' rotation 2014.

"He just doesn't care," Williams said when asked about Roark filling so many roles after he was bumped from the rotation when the Nationals' signed Max Scherzer.

"He enjoys the opportunity to pitch whenever it is and wherever it is, and he's proven that he can handle all of them. That's mentality more than anything, just not caring what the situation is and getting outs, that's how he views it."

Roark made his ninth start of the season, his third straight this month, and his second consecutive against the Miami Marlins on Thursday night in the nation's capital.

After giving up eight hits, a walk and two earned runs in 4 ⅔ IP in a 2-0 loss last week in Marlins Park, Roark gave up eight hits, two of them home runs, and six runs total in five innings in the series opener in D.C., taking the loss again in what ended up a 6-4 game in Miami's favor.

Martin Prado hit a two-run homer in the first and after a sac fly by Dee Gordon in the fifth, Marlins' slugger Justin Bour put a charge in a letter-high 2-2 heater and hit a three-run blast over the out-of-town scoreboard in right to put Miami up 6-2.

"Most of the times, balls that are up at the waist, you know, these are big league hitters, they know how to hit those balls..." -Tanner Roark on struggles vs the Marlins

A few mistakes up in the zone cost him, Roark explained.

"Most of the times, balls that are up at the waist, you know, these are big league hitters, they know how to hit those balls," he said.

"They go far. Like I said, they're big league hitters. So I've got to get down in the zone, but tip my cap to them."

Nats' skipper Matt Williams was asked about Bour's success against the Nationals this season. He started the night 11 for 36 (.306/.419/.556) with three home runs, six walks and six Ks in 14 games against the Nats this season and went 1 for 4 with his 18th home run of the year in the first game of four in the nation's capital.

"He's a powerful guy," Williams said. "So if he gets the head of the bat on it, it can go a long way. He's been playing regularly, so he's getting more and more at bats at the big league level. He's a good hitter."

"I was trying to go inside and left it inner third," Roark said of the home run pitch to the 27-year-old first baseman.

"Didn't get it in there as much as I would like to and like I said, he hit it."

"At other times just a little bit middle and up in the zone. Fastball was good, 92-93, throwing it in there good. The one pitch to Bour was the decider, but just up and middle a little bit." 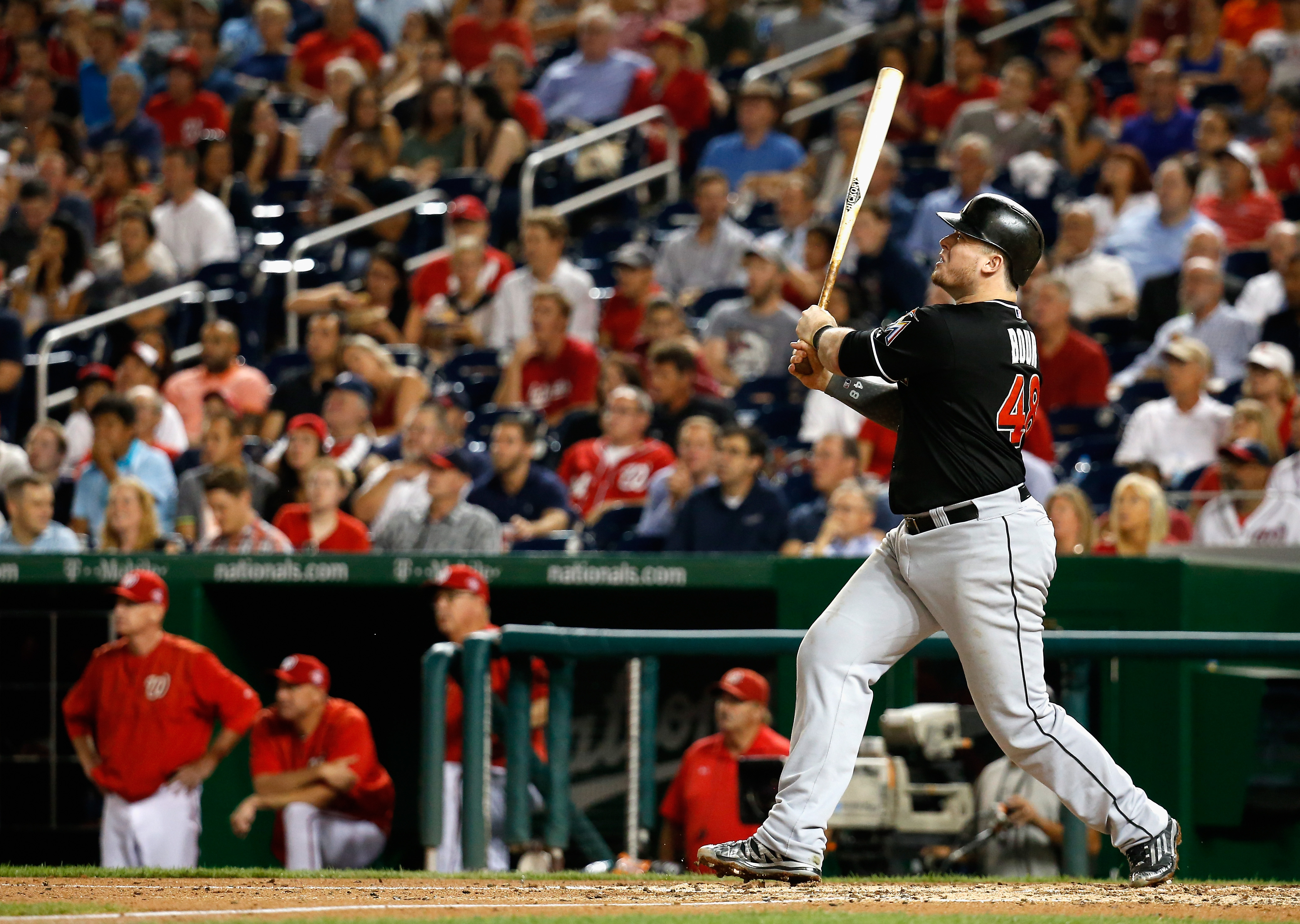 "You're supposed to limit the damage done and I didn't do my job today," Roark lamented.

"I mean, honestly that was the best I've felt, coming out throwing everything, all my pitches felt very good. Just a couple pitches here and there that I didn't execute and they hit them."

The Nationals rallied to get within two in the eighth, but left the bases loaded and eventually lost their third to the Marlins in the last four games between the NL East rivals and their ninth in sixteen games with Miami this year.