The Washington Nationals dropped a 12-5 decision to the Philadelphia Phillies on Sunday, a day after they were officially eliminated from postseason contention and their manager's job is said to be in jeopardy... and it somehow got worse.

Jonathan Papelbon had a problem with something Bryce Harper did on Sunday afternoon. Washington's veteran closer and the Nationals' NL MVP-worthy 22-year-old star exchanged heated words after Harper sent a fly to left and didn't exactly sprint to first base.

By the time Harper turned toward the first base dugout, Papelbon was already talking to the 2010 no.1 overall pick and once Harper walked down the stairs he started talking back.

Papelbon lunged at Harper and gripped his teammate by the neck forcing him into the bench at the back, far corner of the dugout.

Harper pushed back but it didn't take long for the two to be pulled apart.

"First of all let me say, I'm in the wrong there. I've got to leave that up to our manager and you know, there's a lot of competition and it's a long season, it's a grind and I think we're going to handle that in-house..." -Jonathan Papelbon on altercation with Bryce Harper on Sunday

Harper walked to the other end of the dugout, said some more and walked down the tunnel toward the clubhouse.

Papelbon cooled off some and returned to the mound.

Nationals' manager Matt Williams was asked after the game about the decision to send the 34-year-old reliever back out for the ninth after he'd just had an altercation with his teammate.

"At the time, it's a tie game," Williams said, so he sent him back out.

"It appeared that he put his hands on his throat?" a reported noted.

"That's all I'm going to say on the matter. He's our closer, in a tie game he's in the ballgame in the ninth inning."

But given what happened?

Williams told Washington Post beat reporter James Wagner tonight that the Nationals gave fans the "jerseys off their backs" in a yearly post game event following what was supposed to be the final home game and he came right in to talk to reporters, so when he spoke about sending Papelbon back out for the ninth, he hadn't realized the full extent of the confrontation:

Matt Williams clarifies: he did not see video of Papelbon-Harper incident until after fan jersey giveaway & he spoke with reporters. (1/2)

MW was at other end of dugout. Had he known severity of fight, he said he would "absolutely not" have used Papelbon for 9th inning. (2/3)

Williams said behavior like that is not acceptable. "I’m livid about it." (3/3)

But Papelbon did seem to think Harper had done something wrong that needed to be addressed.

Washington Post columnist Thomas Boswell wrote tonight that, "Papelbon yelled at Harper, accusing him of not running out a ball."

Williams was asked after the game if he had any issue with the way Harper ran the fly in question out and if that was the reason the slugger left the game at that point?

"First of all let me say, I'm in the wrong there," Papelbon said when asked why the altercation took place.

"I've got to leave that up to our manager and you know, there's a lot of competition and it's a long season, it's a grind and I think we're going to handle that in-house, and stuff like that, but I've talked to Bryce and told him how we feel and we're on the same page now which is good and squash this and head into tomorrow's game."

There's a lot of testosterone and intensity, the reliever explained, and it boiled over today.

"I can't allow that to happen in the middle of the game, you can handle that after the games or allow the manager to handle that, so in that light of it I'm wrong."

Was there an issue before today?

"No," Papelbon said. It wasn't about Harper's comments about Papelbon hitting Manny Machado earlier this week either. Harper said it was "tired" coming as it did after a home run in the Orioles' slugger's previous at bat and he thought he would likely get hit in retaliation in the next game.

So what was it then? What started the whole incident? Asked directly, Papelbon was still circumspect when it came to details.

"I think, you know, just, for me, just me being out there and I know we're not in playoffs anymore, I realize that," he said.

"And I think there's a lot of frustration that's spilling over and for me it's just a situation where we've got to keep grinding and even though we're not in this thing and play the game the right way, you know."

"For me it's just a tough season and a lot of things boil over, you want to say that, you know, it's for one thing or another and it's not."

Papelbon said a few times in his six-minute interview that it was just a disagreement with someone he thinks of as a brother.

"We're all brothers here, you know," he explained at another point.

"It's just like growing up and you're with these guys more that you are your own family, and I fought with my brothers plenty of times growing up and the next day you give each other a hug and you say, 'Hey look, I'm wrong, you're right and you're right, I'm wrong and let's come back together and keep fighting together and come back next year and keep doing the same thing."

"It's happened for hundreds of years in this game and I think it will continue to happen," Papelbon said. 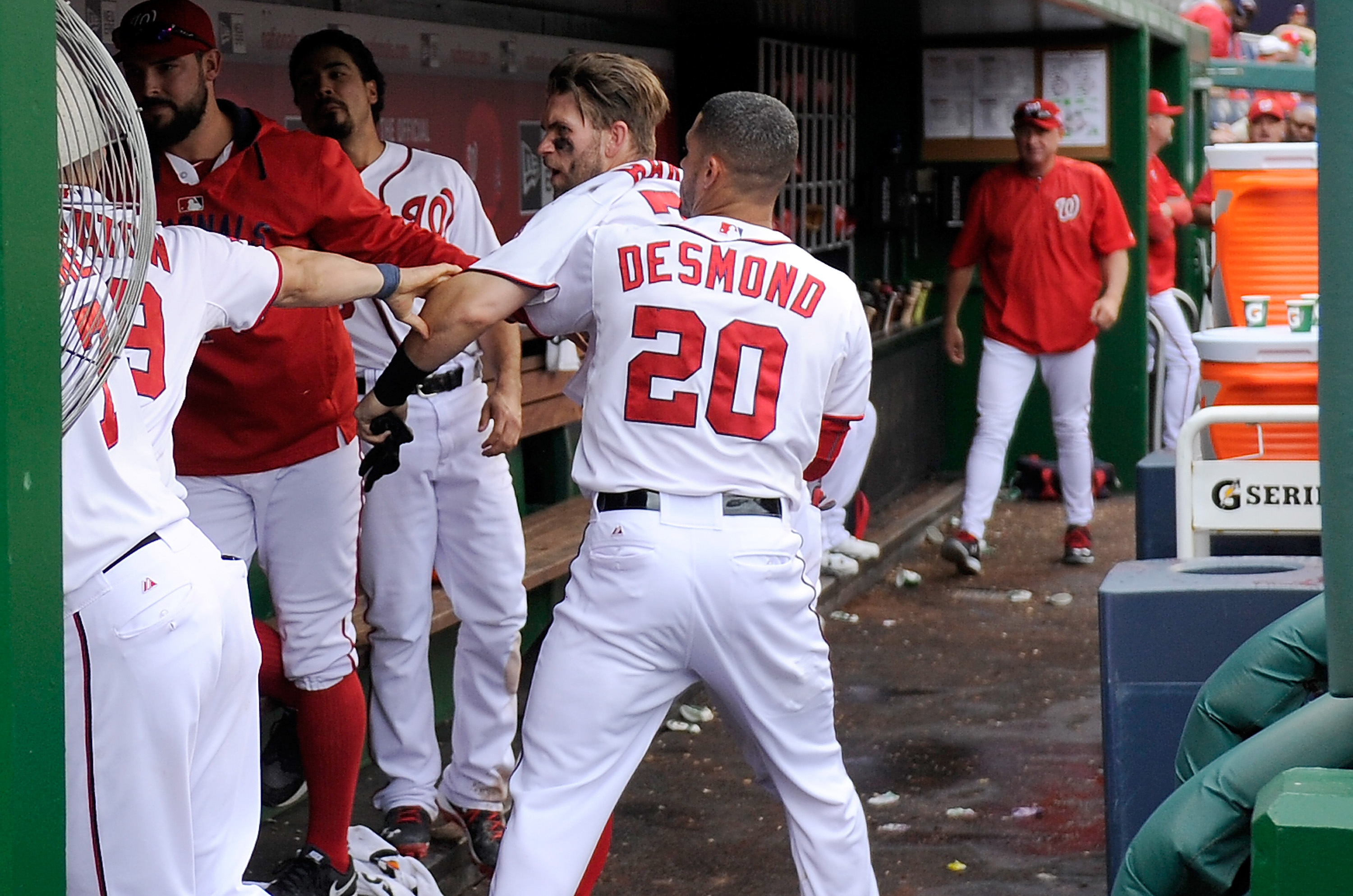 "And I just didn't maybe necessarily do it the right way and there's better ways to do it, but it happened and I can't take anything back, but Bryce and I are good and we will be good."

Harper, didn't have much to offer in the way of detail either, deflecting inquiries by talking about staying focused for the next week and doing what he has to do for the rest of the season.

He did, however, acknowledge that Papelbon had apologized.

"He apologized, so, you know, whatever, I really don't care," Harper said.

"It's the next six days and keep doing what I'm doing. It's like brothers fighting. That's what happens and you know, hopefully move forward and do what I can for the next six days to have some fun and play the game."