Washington Nationals' GM Mike Rizzo met with reporters after Monday's win over the Cincinnati Reds to explain the decision to suspend Jonathan Papelbon for four games after the reliever's dugout altercation with Bryce Harper on Sunday.

Jonathan Papelbon's 2015 campaign ended with a 30-pitch ninth inning on Sunday afternoon in which he gave up two walks and a go-ahead, two-run home run in what ended up a 12-5 loss to the Philadelphia Phillies, the team he started the season with before he was traded to Washington.

"He was upset with the suspension. We discussed about the nature of the incident and how I felt that it was an unacceptable way to handle yourself..." -Mike Rizzo on conversation with Jonathan Papelbon

He was brought on in the eighth inning of a tie game on Sunday, after the Nationals' bullpen blew another late lead and he recorded the final out of the inning.

In the bottom of the eighth, however, he and teammate Bryce Harper were involved in a dugout altercation that resulted in Papelbon receiving a four-game suspension today that, paired with the three-game suspension handed down by Major League Baseball last week, brought an end to the right-hander's 11th season in the majors.

"He was upset with the suspension," GM Mike Rizzo told reporters on Monday.

"We discussed about the nature of the incident and how I felt that it was an unacceptable way to handle yourself as a Washington National. We parted amicably and I left it with we will see him shortly after the season."

Papelbon will not travel with the team on their season-ending road trip to Atlanta and New York. Will he be back with the Nationals in 2016?

"He's under contract," Rizzo said. "We're going to evaluate every moving part that we have after the season and we'll make all those decisions once the final out is made in 2015."

Papelbon's brash, opinionated, crotch-grabbing antics were well-known when he was acquired, but Rizzo explained today that they satisfied any concerns before shipping right-handed pitching prospect Nick Pivetta to the Phillies to get the right-hander.

"Every player acquisition we make," he said, "makeup and character are a big portion of the evaluation process and we felt that what happened in the incident in the dugout was unacceptable and we acted accordingly."

"We did a lot of due diligence," Rizzo said, "like we do with every player that we acquire at the trade deadline or the draft or anything.

"Bryce had some accountability in the issue. We felt that to discipline Papelbon the way we did and not Bryce was unfair..." -Mike Rizzo on suspending Jonathan Papelbon and keeping Bryce Harper out of Monday's game

"We talked to a lot of his teammates, a lot of teammates he had in Boston. He's one of those guys that maybe irritates you if he's on the other team. But he's a good teammate that wants to win. He's a competitive guy."

"I think for the most part he has fit into the clubhouse culture fine. You can ask the players in there. I think they respect what he's done in the game and the way he prepares and goes about his business. I'm not going to judge his entire body, his whole career, by this one incident. It was unfortunate and unacceptable. And I think the suspension says that."

Bryce Harper was disciplined as well, but he was just held out of Monday's game, which he was scheduled to miss already, according to what Harper said on Sunday night at least.

"Bryce had some accountability in the issue," Rizzo explained. "We felt that to discipline Papelbon the way we did and not Bryce was unfair and you could see by the type of discipline that we placed on both players which was weighed the most and we thought they were both equal and equitable ways to handle the situation."

But what exactly did Harper do wrong that started this whole incident? What did he do wrong to earn the day off?

"He was held out of the lineup for one game because he was involved in a dugout fight with Jonathan Papelbon," Rizzo said.

"That was the reason. That he was involved in it and you can see by how we weighted the disciplinary actions, who we felt was more at fault than the other."

Rizzo was asked if he had any issue with Harper's hustle on the pop fly in question? Was Papelbon justified in calling Harper out? 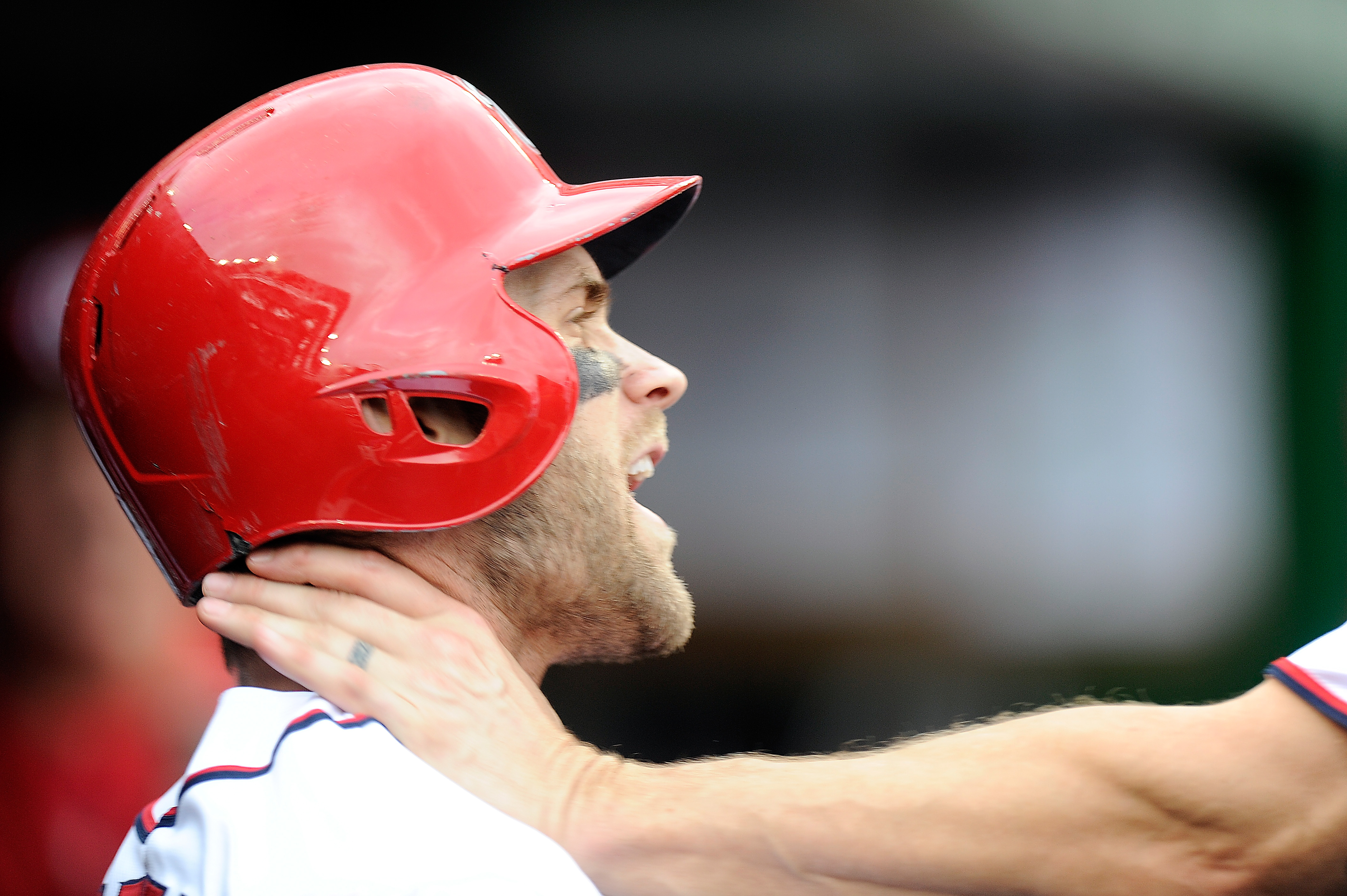 "He did not deserve it in my personal opinion," Rizzo said. "In Jonathan Papelbon's opinion he did. But in my opinion he did not."

"I love the way Bryce Harper plays," Rizzo stated firmly. "I've got no problem with his effort level. The way he hustles.

"It is the job of the veteran players to point out what they think when you're not playing the game right. Pap must have felt that he wasn't and he called him on it.

"It takes a guy with some guts to call a player out nowadays, but Harper plays the game the right way. I have no problem with the way he plays."

Papelbon did. He voiced it. He grabbed the Nationals' 2010 no.1 overall pick by the neck and pushed him into the back wall of the dugout. It cost him four games worth of pay.

Will it end his brief run in the nation's capital?