Max Scherzer held the Cincinnati Reds hitless through 8 1/3 innings before catcher Tucker Barnhardt lined a 98 mph 1-2 fastball to left field for a single. Washington's 31-year-old right-hander lost his bid for a no-hitter, but the Nationals won, 5-1.

Share All sharing options for: Nationals' Max Scherzer loses bid for second no-hitter of the season in the eighth

Baseball fans in the nation's capital, in desperate need of a break from an endless loop of their potential MVP being choked by the closer they never really wanted, were provided with a distraction for a few hours on Monday afternoon.

Max Scherzer, in the final home game of the 2015 campaign, took a no-hit bid into the eighth inning of Washington's game against the Cincinnati Reds, who were in town for a one-off makeup of a postponed game from July.

"Innings 4-5-6... he cruised and he was throwing it exactly where he wanted to throw it. So and then of course you start thinking." -Matt Williams on when he started to think Scherzer might do it again

Before the Nationals' home finale, Nats' skipper Matt Williams informed reporters, moments after the news went public, that closer Jonathan Papelbon had been suspended for his role in instigating a dugout altercation with Bryce Harper on Sunday.

"I'm sure as all of you are aware, we've suspended Jonathan Papelbon for four games, without pay, reflecting how seriously we take the incident in the dugout yesterday," Williams said.

"Also, additionally, for his part in the altercation, Bryce [Harper] will be out of the lineup today."

Harper sat out of the game. Ian Desmond had the day off. Jayson Werth rested. Trea Turner started at short. Dan Uggla got a start at second. Matt den Dekker, coming off a 4 for 4 game on Sunday, got another start in the outfield.

Michael Taylor, Clint Robinson and Wilson Ramos were the only regulars in the lineup.

On the mound was Scherzer, coming off a frustrating loss to the Baltimore Orioles last week in which he gave up a go-ahead home run in the seventh on a challenge fastball to Manny Machado.

Against the Reds, however, the 31-year-old right-hander was back on track.

Working mostly with his four-seamer, which he threw 67 times out of 113 total pitches, at an average of 95.8 mph and up to 99, Scherzer dominated Cincinnati's hitters, throwing seven scoreless and hitless on 98 pitches.

"He had good command of [the fastball] today. Which puts the slider in play. It puts the fastball in in play to the left-hander and the changeup." -Matt Williams on Max Scherzer vs the Cincinnati

With one down in the eighth, however, Reds' catcher Tucker Barnhart hit a 98 mph 1-2 fastball through the left side of the infield for a single that ended Scherzer's bid for his second no-hitter of the season.

"I thought he was going to do it again," Williams said after what ended up a 5-1 win.

"I was getting some luck," Scherzer told reporters, including MLB.com's Bill Ladson and Jacob Emert.

"They hit a couple of balls at some people. Our guys made some great plays. I thought we had the makings of it."

Williams was asked at what point he began to seriously consider the fact that Scherzer might do it again?

"He cruised and he was throwing it exactly where he wanted to throw it. So and then of course you start thinking that he's feeling command, he's feeling strength. He's 96-97 when he needs it and strong."

"Cloud nine": Max Scherzer on his no-hitter vs the Pirates 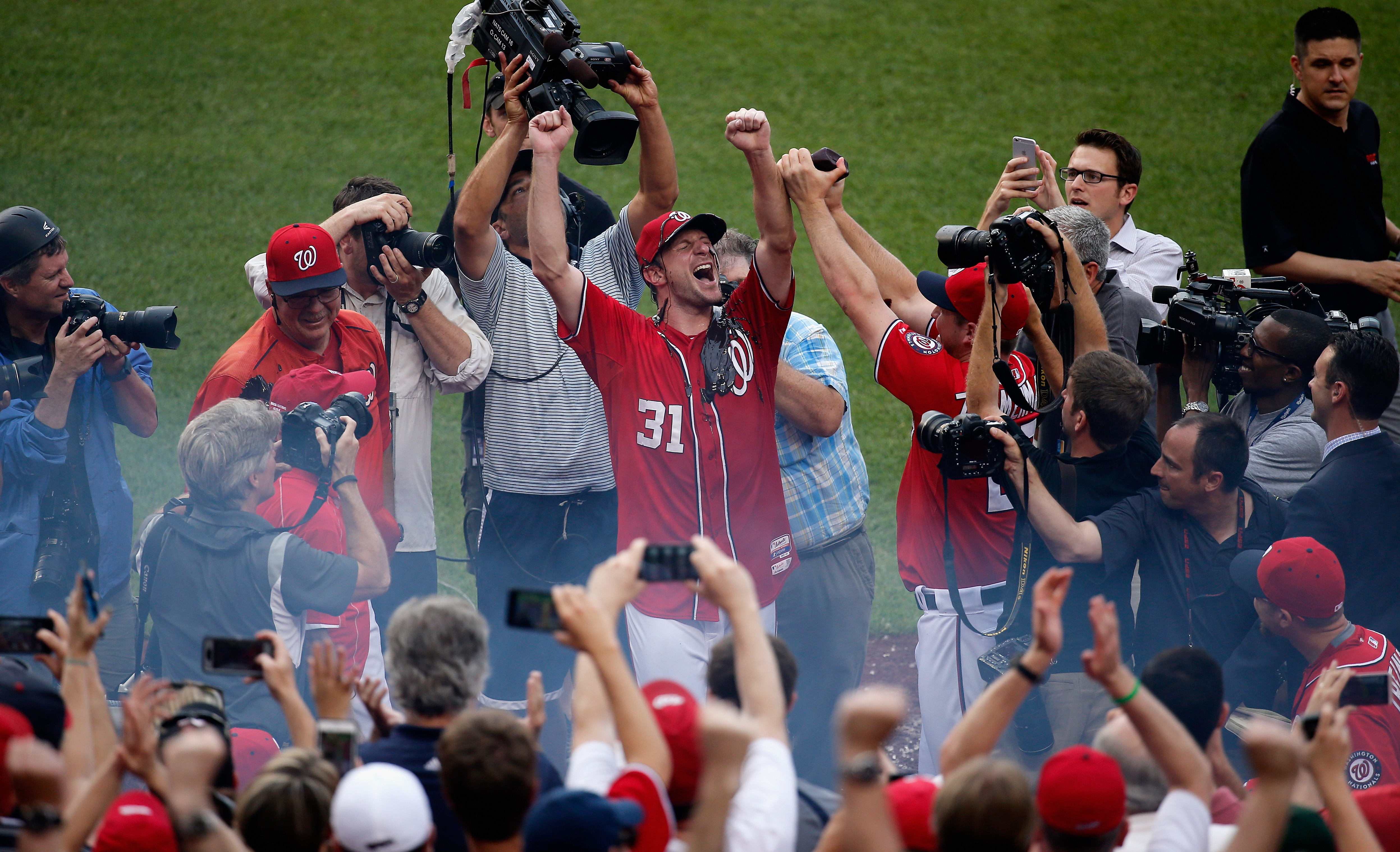 "So, all of that combined, you start thinking about it. A pretty special day for him."

How did Scherzer's stuff compare to what he had back on June 20th in his first career no-hitter?

"I think for him, the most important thing is a fastball down and away to the righty," Williams said.

"He had good command of that today. Which puts the slider in play. It puts the fastball in in play to the left-hander and the changeup.

"When he's got that pitch then he's really good because you have to commit as a hitter both sides of the plate. He was really special."