Nationals' walk-off win over Braves leaves them 5.0 games out in the NL East

Michael Taylor's walk-off home run won it for the Washington Nationals, but some tough decisions by Matt Williams, a big hit by Matt den Dekker and two scoreless innings by Jonathan Papelbon helped the Nats beat the Atlanta Braves.

Share All sharing options for: Nationals' walk-off win over Braves leaves them 5.0 games out in the NL East

Michael Taylor's walk-off, three-run home run sent everyone home happy, but it took a bit of work and some luck for the Washington Nationals to get there. After his four walk, four run, zero at bat night in the series opener with Atlanta, Bryce Harper took the bat off his shoulder and hit a solo home run off Braves' right-hander Julio Teheran in the first, sending a 95 mph 3-2 fastball into the second deck in right-center in Nationals Park for a 1-0 lead early.

Harper's 32nd home run of the season, his first in 51 plate appearances, was apparently the longest of his career, a 453 foot blast.

"When he first hit it I thought it was plenty deep enough, but he's got good power. Puts the head of the bat on the baseball, it goes a long way." -Matt Williams on Michael Taylor's walk-off homer

The Braves tied it up in the third inning with a one-out walk by Nick Markakis, a two-out single by Freddie Freeman and a swinging bunt by A.J. Pierzynski pushing across the only run Nats' starter Tanner Roark allowed in 4 ⅓ innings in his first start since June 28th.

Roark, after two starts in the minors in which the Nationals tried to get him stretched out, threw 69 pitches before Nats' skipper Matt Williams went to the bullpen with the bases loaded and one out after another walk to Markakis, a double by Cameron Maybin and an intentional walk to Freddie Freeman.

Williams went to left-hander Matt Thornton early, with Roark good to go up to around 85 pitches, but said the right-hander's effort was a "good" one.

"I think he used all of his pitches. I saw some good curveballs. He got in trouble in his last inning and we had to go Thornton, but I thought he was good. He didn't get to 80-85, but nonetheless, he's prepared if he has to do it again."

Thornton popped A.J. Pierzynski up, then stayed on to face third baseman Adonis Garcia and got a groundout to second to end the threat and keep it tied after five.

"We know that Tanner is limited," Williams said, in explaining his thought process in the fifth.

"Good team effort. Guys were intense and grinding all the way. We had opportunities and it didn't happen for us, but eventually we came through." -Matt Williams on the Nationals' walk-off win over the Braves

"We knew going in that it's going to be into the bullpen fairly early. It was good matchups for [Thornton] there to come in and get those outs. You've got Pierzynski and then the righty as well. So he did a nice job. Everybody did a nice job tonight. Good team effort. Guys were intense and grinding all the way. We had opportunities and it didn't happen for us, but eventually we came through."

Before Taylor's walk-off winner, the Nationals had to rally to tie it. Drew Storen gave up a leadoff double by Freddie Freeman (3 for 4, 2 doubles) in the eighth, and an RBI single by pinch hitter Nick Swisher that put the Braves ahead, 2-1.

Arodys Vizcaino, who threw a scoreless eighth, working around a leadoff walk to Harper, came back out for the ninth with a streak of 16 ⅔ scoreless innings going back to July 20th and gave up a leadoff double by Yunel Escobar.

Trea Turner came on to run for Escobar at second and with the Nationals down by one run, Williams called for Ian Desmond to bunt the runner over even when the shortstop fell behind, 1-2. Desmond managed to get his bat on a slider from Vizcaino and successfully bunted Turner over.

"He looked at me, he felt comfortable with two strikes," Williams said. "We want to get that runner to third base and have an opportunity there, and he did a nice job of laying it down."

"He can hit a fastball," Williams told reporters.

"He's on most fastballs and he got one out over the plate to hit. We got [Ramos] for [Lobaton] there. [Ramos has] been swinging the bat well for us, he's been hot.

"They were able to punch him out, but [den Dekker] came through with a big hit for us." 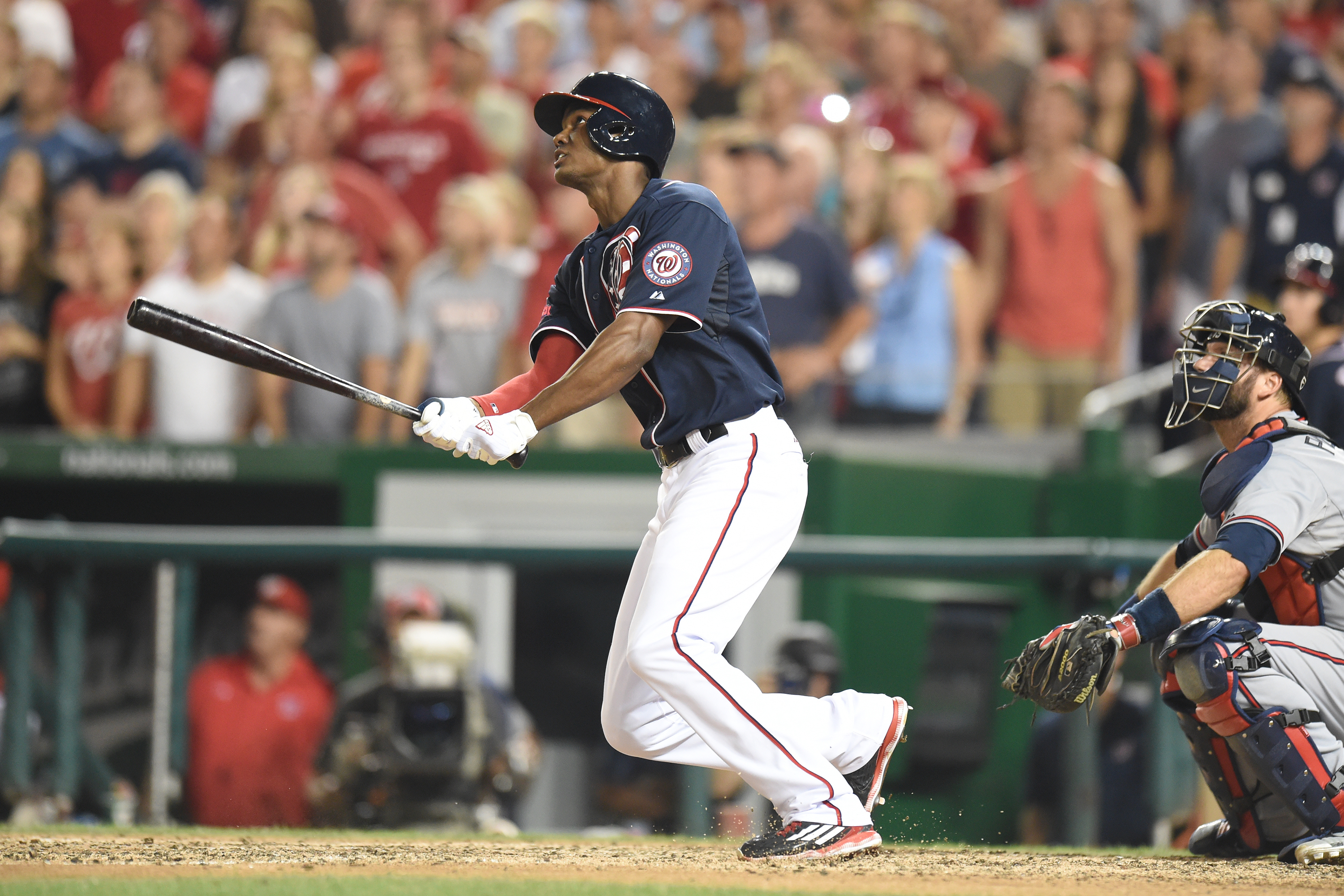 Jonathan Papelbon, who'd thrown a scoreless ninth, came back out for a second inning of work for the first time since he was a Phillie and completed a 1-2-3 top of the tenth before Taylor's home run ended the game.

"It's all about what we are as a team and how we are as an organization," Harper told reporters after the Nationals' win.

"I think just being able to go into every single game trying to win every single inning and fight till the end and that's what we did tonight and everybody saw the outcome."

With Washington's win, and the New York Mets' loss in Miami, the Nationals pulled within 5.0 games of first in the NL East with 28 games left.