With Bryce Harper set to receive his NL MVP award this weekend, Frederic J. Frommer wonders if there shouldn't be some sort of recognition of the Washington Nationals' 23-year-old slugger's monumental achievement in the nation's capital.

Bryce Harper, who will receive his 2015 Most Valuable Player Award in New York this Saturday, brought joy to Washington in a year that didn’t have much of it for Nats fans. Maybe Congress should repay him with a federal monument.

Ninety years before Harper’s historic season, Congress considered legislation that would have done just that for American League MVPs. In 1924, the Senate voted to accept the league’s offer to build a $100,000 monument in East Potomac Park (nearly $1.4 million in today’s dollars). But congressional gridlock was alive and well in the 1920s, even for something as innocuous as a fully paid-for gift honoring the national pastime’s best performers. The monument couldn’t overcome the opposition from a few cranky House members, and the bill authorizing it died in January 1925.

"'Why not a monument to golf?' asked Emanuel Celler, a young first-term Democratic congressman from Brooklyn who would go on to serve in the House for 50 years." -Congressman Emanuel Celler on the idea of monuments for baseball MVPs

Ironically, later that year Senators shortstop Roger Peckinpaugh went on to win the American League MVP—the last time a player from DC claimed the award. Then he committed eight errors in the World Series, costing the Senators their chance to repeat as world champions.

The Senators’ back-to-back pennants in the mid-‘20s marked Washington baseball’s high-water period, with Hall-of-Fame pitcher Walter Johnson claiming the MVP in 1924. Back then, baseball was unquestionably the nation’s most popular sport, so it was no surprise when the Senate approved the MVP monument resolution without any debate. The text of resolution called for accepting the American League’s offer to build, "as a gift to the people of the United States…a monument to symbolize the national game of baseball and the benefits resulting therefrom to the people of the United States."

But some congressmen refused to go along. House leaders tried to bring up the bill under unanimous consent three times, but were thwarted each time.

"Why not a monument to golf?" asked Emanuel Celler, a young first-term Democratic congressman from Brooklyn who would go on to serve in the House for 50 years. "Why not a monument to tennis? Why not one to every branch of sport? I can’t see that it is the business of the national government to clutter up its public grounds, especially in Washington, with monuments of this kind."

Celler was one of three House members that objected when the leadership tried to bring up the bill. The other two were Edward King, an Illinois Republican, and Thomas Blanton, a Texas Democrat. Blanton suggested that it made as much sense to erect monuments to fox hunting and swimming holes, because residents back home were partial to both activities. (There was no major league baseball in Texas at the time.)

"[Thomas] Blanton suggested that it made as much sense to erect monuments to fox hunting and swimming holes, because residents back home were partial to both activities." -Texas Democrat Thomas Blanton on idea of monuments to baseball MVPs in D.C.

American League owners voted to rescind the offer that February. The Senators, probably oblivious to the brouhaha on Capitol Hill, dominated the American League in the ensuing season, finishing 8 ½ games ahead of the second-place Philadelphia Athletics.

Peckinpaugh won the 1925 MVP in recognition of his leadership and steady defense. Still, the reward was a bit of a head-scratcher. He hit just .294 (in a year when the league average was .292) with four home runs. Peckinpaugh certainly wasn’t the best player in the league, or for that matter, even his own team. His teammate, outfielder Goose Goslin, hit .334 with 18 home runs and a league-best 20 triples. Back then, the MVP was announced in September, and when Goslin came up to bat in the World Series, the Pirates catcher, Earl Smith, used the award to psyche out the Senators outfielder, as recounted in 1950 by New York Times Pulitzer-prize winning columnist Arthur Daley. Reading this exchange brings back memories of that old classic Bugs Bunny cartoon, where Bugs strikes out three batters on one super slow ball.

The feared Goose Goslin was at bat, and Smith, who had been riding him mercilessly, suddenly turned soft.

"You know what, Goose," asked the sympathetic Smitty. "I thought you got a raw deal when Peck beat you out as most valuable player." The entranced Goslin watched a strike float past.

"Yessir, Goose," continued Smitty, "it was a lousy trick to vote Peck over you."

"You hit better than he did and you fielded better and" Smitty’s voice trailed off until the third strike was called. Then he returned to character.

"Scram, ya bum," he shrieked as the Goose trudged dispiritedly back to the bench. "Those guys had it right all along. Peck’s a far better ball player’n you, ya bum, ya."

Goslin might have looked bad in that one at-bat, but Peckinpaugh turned out to be the World Series goat.

You Gotta Have Heart: Washington Baseball history from 1859-2012 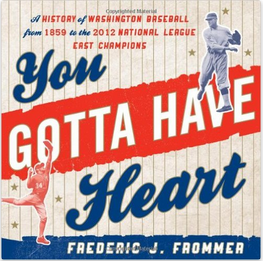 Cover photo of Frederic J. Frommer's "You Gotta Have Heart"

His whopping eight errors included two in the seventh and deciding game, leading to four unearned runs in the Pirates' 9-7 victory over the Senators – costing Walter Johnson the decision in his last World Series game. Even though the MVP is supposed to reward regular season performance, Peckinpaugh’s disastrous World Series made his questionable MVP even more suspect.

Today, Harper is a much more deserving MVP winner, even if his team was a colossal disappointment. He led the National League in runs scored (118), on-base percentage (.460) and slugging percentage (.649); tied for the lead in homers (42); and was second in batting average (.330), in a year when the league average was just .253. Now that he’s brought the award back to Washington, perhaps his legions of fans on Capitol Hill, including Senate leaders Mitch McConnell and Harry Reid, will bring the MVP monument idea back for the National League. Who could object this time?

Frederic J. Frommer (Twitter: @ffrommer) is head of the Sports Business Practice at the Dewey Square Group, a public affairs firm, and author of "You Gotta Have Heart," a history of Washington baseball. A version of this story originally appeared in Washingtonian.