Turn away now if you're a Washington Nationals fan who doesn't like to acknowledge the franchise's Montreal Expos past, because it's about to get all tri-coloured in here. We got to preview the new MLB Network Presents documentary on the Montreal Expos.

Share All sharing options for: FBB at the Movies: MLB Network Presents "The Colorful Montreal Expos"

I was given an opportunity to watch a private screener of the MLB Network's new documentary on the Montreal Expos: MLB Network Presents "The Colorful Montreal Expos" before it airs tomorrow. - [ed. note - "Some spoilers."]

What follows are the mostly unedited notes I took and quotes that stuck out while I was watching the William Shatner-narrated film which will debut on Tuesday night at 9:00 PM EST on the MLB Network.

It'll probably make more sense, read better, if you read it when/if you watch the movie...I went for more of a live blog, stream of consciousness sort of thing, but whatever.

"The Expos are still alive in Montreal, you just have to look a little harder to find them..." -William Shatner in the MLB Network's Expos documentary

Shatner, of course, is Montreal-born and raised, you know, before he went to the Starfleet Academy.

"The Expos are still alive in Montreal, you just have to look a little harder to find them..." - William Shatner

"It was a weird franchise... the mascot was weird, the stadium was weird..."

The idea that the Expos were built around fun instead of winning is sad, but true-ish and it worked.

"There were times when I thought he was a homeless guy." - Tim Raines on Bill "Spaceman" Lee.

Jeez, and all that was just from the first sort of intro segment... this is going to be tough.

D.C.-based fans have to know this feeling, as much as they bristle at talk of the Expos, since they did lose two teams themselves. Or is that too far in the past for most fans in the nation's capital?

Having followed the franchise since childhood, through the move from Montreal till now, getting to know D.C. baseball history has been great, can understand why interest hasn't gone the other way though...

Jonah Keri is great in this documentary.

Wish I could have gone to Jarry Park. All my Expos memories are in the Stade Olympique.

For the last few years, with rumors of the Expos' relocation ever-present at that point, my brother, an Atlanta Braves fan, and I would travel to Montreal to watch the last series between the two teams. That's just a fun fact, no point really.

The idea of the 1972 Rusty Staub trade conditioning Expos fans for what was to come as one star after another left the franchise over the years is depressing to the child in me.

Getting an opportunity to talk to Gary Carter and Andre Dawson when they were honored at Nationals Park back in 2010 was one of the most enjoyable days of my baseball life. I probably don't need to qualify with "baseball"...

Gary Carter remembers playing for the Expos: "It was a stepping stone for all of us. We fortunately had that opportunity to play at an early age with a young organization that just got started in 1969. It was an expansion team, so, in other organizations, we may not have gotten that same opportunity and moved up that ladder as quickly as we did. So, Andre made the quick jump, he went Double-A, Triple-A, big leagues all in one year. I spent two and a half years in the minor leagues, but that's relatively short in terms of spending time in the minor leagues. You know, again, the Expos groomed a lot of their talent in the minor leagues, and I give them a great deal of credit for bringing that talent to the major leagues, cause not only Andre and myself, but you look at the great pitchers, Steve Rogers, Bill Gullickson, Charlie Lee, David Palmer, Scott Sanderson, Warren Cromartie came along, Ellis Valentine, Tim Raines, I mean it was just endless. And the unfortunate thing is we never won a championship up there. Only 1981, is the only feather that the Expos have in their cap, and that was from the split season which we won against the Phillies and lost to the Dodgers in the League Championship series.

My favorite part of the Stade Olympique, in the last years, was the sound that fans would make when they would clap the empty seats next to them up and down instead of clapping with their hands. There is a quick shot of a fan doing that in the documentary.

"I'm not flaky at all. It's the right-handed world that causes the problems and the left-handers are just responding to it." - Bill "Spaceman" Lee

I was too young for "Blue Monday" to hurt as much as it did for older fans.

Called the "saddest day in the history of Montreal sports" in this doc, bold statement when talking about a hockey town (and country).

Experiencing that feeling for the first time (as a totally objective, emotionless professional member of the media in the Nationals Park press box in 2012) got to me though. Gut punch.

"The winters are long in Montreal and they don't forget anything." - Rick Monday. Don't mention his name in Montreal.

Andre Dawson and Tim Raines are by far my favorite players of all time from the Expos years. Gary Carter is not far behind. But Dawson and Raines were always my favorites. Good to see how important they were to each other.

Gary Carter in a Mets uniform. Now I'm getting angry all over again.

Carter's storybook ending, which was a double over Dawson's head in his last at bat in Montreal when he returned to the Expos... it's dusty in here. 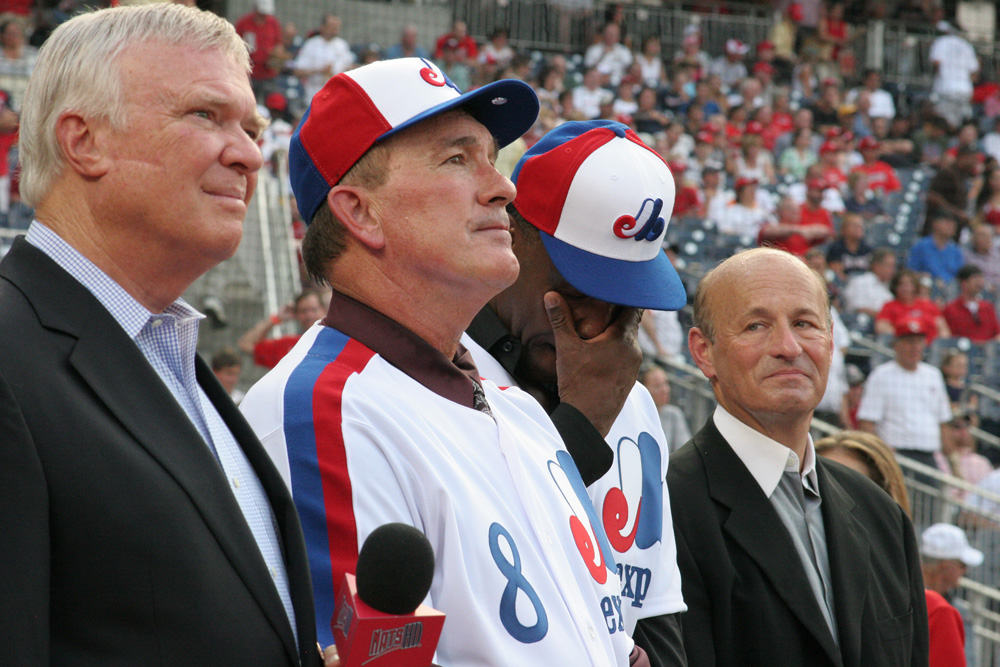 "Expos University" = four years in Montreal and then you move on... paraphrasing Jonah Keri. Sad reality of what life was like growing up a fan of the Expos. They developed a lot of talent for other teams.

"I saw myself as a champion in 1994, I just never got to celebrate it." - Pedro Martinez after winning the World Series with Boston in 2004 and saying he shared it with Montreal fans.

Final thoughts on the movie:

Did I miss the part on Vladimir Guerrero, arguably the best player to wear an Expos cap and jersey? Late era Expos like Vladi, Orlando Cabrera, Javier Vazquez, Frank Robinson, etc. didn't get a lot of love. Maybe I missed the "Let's play in Puerto Rico" part too..."

I'm not sure if Major League Baseball will ever return to Montreal, but they should give the city another chance.

Two thumbs up for the documentary, even minus the love for Vladi. Check it out tomorrow night at 9:00 PM on the MLB Network.