Don't feel too bad for the Washington Nationals. They may have missed out on a number of free agent targets, but they've also won two division titles in the last four years and they still have some talent in D.C. as they try to take the NL East back from the mighty Mets.

Mike Rizzo is happy with the Washington Nationals' roster, though he's always open to improvements. He has said so repeatedly this winter, as the Nats have pursued a number free agent options, with several of their targets spurning the Nationals' advances, and some taking less money than Washington was offering to sign elsewhere.

Washington Post writer Barry Svrluga wrote this weekend, after Yoenis Cespedes took a 3-year/$75M deal to return to the New York Mets when the Nationals were reportedly offering a 5-year/$100M+ deal, that the logic which said the Nats could just substitute Michael Taylor for Denard Span in center, shift Danny Espinosa to short and wait for Trea Turner to eventually replace Ian Desmond, move Anthony Rendon back to third, add Daniel Murphy at second and replace Jordan Zimmerman and Doug Fister in the rotation with Tanner Roark and Joe Ross and "... boom! There's your contender," is somewhat unrealistic.

"What we know now — after not just the pursuit of Cespedes, but the pursuit of Heyward and Zobrist and Upton — is that General Manager Mike Rizzo wanted to make a splash..." -Washington Post writer Barry Svrluga on the Nats' swings and misses this winter

"That logic," he wrote, "... is for winter caravans and public relations chats."

Darren O'Day decided to return to the Baltimore Orioles on a four-year deal, with the O's willingness to give him a fourth year luring him back to Camden Yards.

The Nationals reportedly offered Zobrist a 4-year/$60 deal before he signed a 4-year/$56M deal with the Chicago Cubs.

Washington reportedly offered Heyward $200M before he signed an 8-year/$184M deal with the Cubs, explaining that he liked the youth on the roster in Chicago and the potential to play for a potential perennial contender.

The Nationals tried to trade for Brandon Phillips too, but the Cincinnati Reds' second baseman declined to waive his no-trade rights to facilitate a deal.

Cespedes took a three-year deal from the Mets when the Nationals were willing to go to five.

The pursuit of both Justin Upton, who signed with the Detroit Tigers and the 30-year-old Cespedes, even after the Nats traded for Ben Revere, was even more evidence, in Svrluga's opinion, that Rizzo wanted to make a splash.

"So that puts further emphasis on the idea that Washington feels pressure to make a major move. But more than further tweaks to the bullpen or enhancements to the rotation — both of which would be wise — there is an organizational identity at stake here. Internally, the Nationals badly want to be considered among the standards in the game. Externally, that notion is — not a joke, but not close to reality.

"Each free agent who spurned the Nats had his own reasons for going elsewhere, sure, but collectively — well, even some internally wonder why no one will take the [Lerner’s] money."

"I don't see any common thing between the three other than they chose the teams that they chose over many, many teams that have interest in them..." - Rizzo at WinterFest on missing out on O'Day, Zobrist and Heyward

Rizzo talked at Nats WinterFest about the ultimately fruitless pursuit of Heyward. Was the offer the Nationals made a competitive one?

"I think it was," he said. "We made an aggressive, legitimate, market value offer to a terrific player and he decided to take it elsewhere."

"It was a disappointment, obviously that we didn't land Jason, who is a terrific player, great citizen and an all-around good guy," Rizzo admitted, "but those things are expected. We have alternative plans for everything that we get done and for things that we don't get done, so we wish him well and we'll certainly make arrangements to improve the roster in other ways."

And the offers to O'Day and Zobrist? Were they competitive?

"Definitely. They were competitive, market-value deals and things that came into play that they decided to go to other places. When they sign somewhere else you have to have an alternative plan to fill those holes and we think that we have a strategy in play that we're going to improve the club when it's all said and done."

Was there any common thread or theme between O'Day, Zobrist and Heyward, all of whom signed elsewhere?

"I don't see any common thing between the three other than they chose the teams that they chose over many, many teams that have interest in them," Rizzo said.

They signed Oliver Perez as well this winter, traded for Trevor Gott and added Yusmeiro Petit to the bullpen mix.

Daniel Murphy, who signed a 3-year/$37.5M deal with the Nationals after helping lead the Mets to the postseason, was asked in his introductory press conference what if anything he'd heard about the clubhouse in the nation's capital? 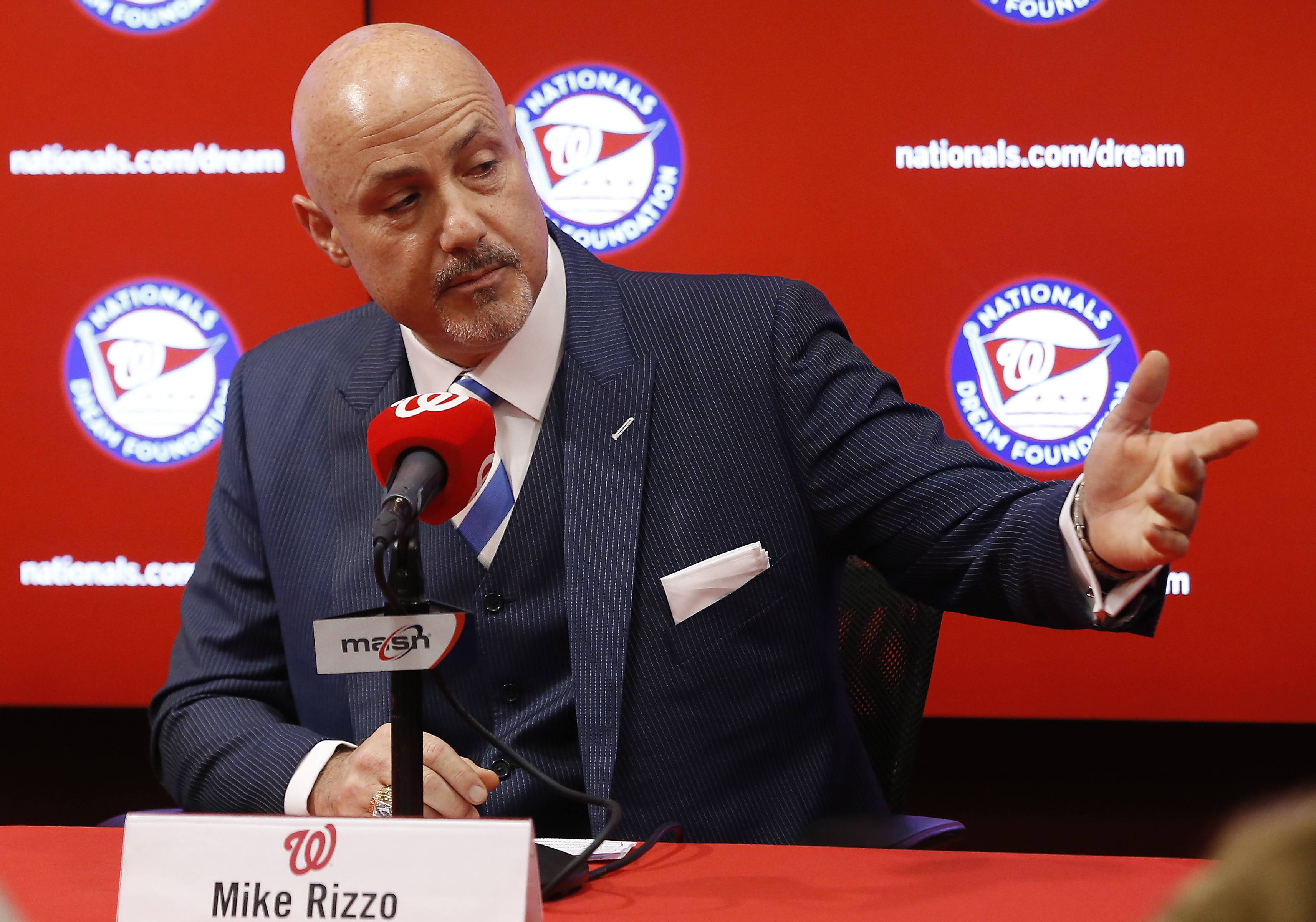 "I've been able to speak with Matt den Dekker," Murphy explained, "because he was with the Metropolitans while I was there and we got to play together and he spoke very highly of the [Nationals'] clubhouse, the unity that this group has and then from the opposite side, looking from the other dugout, it didn't go much further than seeing [Max] Scherzer, [Stephen] Strasburg, Gio [Gonzalez], was kind of the first thing you thought about when you knew you were coming to town. So to be on this side of it is really exciting. Facing those three guys, and with the depth that you have with Joe Ross and Tanner Roark as well, it will be much more pleasant to be on this side of it than the other side of it."

Was the bullpen makeover, the signing of Murphy and the acquisition of Revere enough for the Nationals to contend for the NL East crown and a return to the postseason? They obviously wanted to make further additions, but didn't.

The winter isn't over yet, of course, and the splash Rizzo and Co. wanted to make could always come in the form of a trade...