Will the Washington Nationals actually deal Gio Gonzalez this winter? Will they find the outfield bat that they're reportedly after but say they don't need need? And how about Drew Storen and Jonathan Papelbon? When will the Hot Stove season end...

According to a report by Jon Heyman last month, the Washington Nationals and their divisional rivals, the Miami Marlins, had what was apparently a brief discussion about a deal for Gio Gonzalez which ended when the Nats asked for Christian Yelich in return:

i hear the nats asked for christian yelich for gio gonzalez. took 1 second for marlins to say no thanks.

In a late-December article, Washington Post writer James Wagner wrote about the possibility of a trade involving Gonzalez, if the Nats potentially sign a starter this winter.

"If the Nationals did add a starter, it would be to trade a starter to fill their other needs," Wagner suggested.

"Gio Gonzalez, for example, could be attractive trade bait because of his age (30) and contract (under team control for three more seasons for $36 million)."

According to a report by FOXSports.com's Ken Rosenthal this morning, the Nationals have talked to at least one other team about a potential trade for Gonzalez.

"Before the Diamondbacks included Ender Inciarte in the Shelby Miller trade, they strongly considered a deal that would have sent Inciarte to the Nationals for left-hander Gio Gonzalez, according to major-league sources."

As the WaPost's Wagner suggested, Rosenthal wrote that the Nationals are considering dealing Gonzalez and potentially signing a free agent starter.

"The Nats are discussing such a scenario, sources say. Their frequent business partner, agent Scott Boras, represents both pitchers.

He could give the Nationals, "... a long-term piece to go with righty Max Scherzer," and the Nats, "... still would control Tanner Roark along with younger righties such as Joe Ross, A.J. Cole and Lucas Giolito beyond '16," and since the Nationals already lost their first-round pick in 2016 when they signed Daniel Murphy, it would only cost them a second-round pick AND they have two compensatory picks coming back after they made qualifying offers to both Jordan Zimmermann and Ian Desmond, who declined them before becoming free agents.

As for the Nationals' rumored, continued pursuit of a left-handed bat?

Inciarte, 25, and a left-handed hitter, would have fit the bill, Rosenthal wrote, and would have given, "... the Nats an alternative to the right-handed hitting Michael Taylor in center and Jayson Werth in left."

If the Nationals don't trade Gonzalez, "they could fill their need for an outfielder by signing free agent Gerardo Parra," Rosenthal suggests, "whom Nats GM Mike Rizzo secured out of Venezuela in 2004 during his tenure as the D-backs' scouting director.

"They could even pursue Yoenis Cespedes," the bow-tied reporter added, "but he would be more expensive and, as a right-handed hitter with limited ability in center," is, "less of a fit."

Rizzo, as he has all winter, told reporters yesterday, at Murphy's introductory press conference, that he's happy going forward with the outfield options already on the Nationals' roster.

The Nationals don't need to add an outfielder... BUT...

"If there’s a value out there that can help the ballclub, then we would certainly look into it," Rizzo told reporters, including Washington Post writer Chelsea Janes, "but we like our depth and we like our talent level."

He also said that the Nationals are willing to keep both Drew Storen and Jonathan Papelbon in the bullpen, in spite of the fact that rumors persist that the Nats are shopping both relievers this winter. 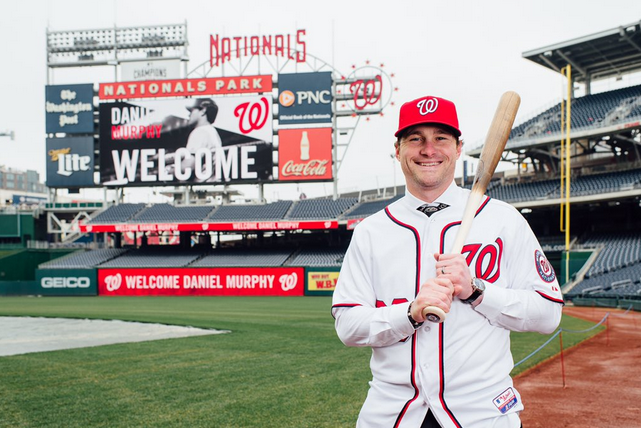 "I think we’re in the same place that we’ve always been," Rizzo said, as quoted by CSN Mid-Atlantic's Chase Hughes:

"If there’s a baseball trade that makes sense, we would make it. We’re not gonna trade anybody to move a player because we like both of them. We think they’re both talented relievers. Both of them on our team makes our bullpen better."

Rosenthal's sources are among those who aren't buying it:

The Nats, according to rival executives, are trying to trade both of their top late-inning relievers, Drew Storen and Jonathan Papelbon.

Is there still something big coming for the Nationals? Will Rizzo trade for the outfield bat they're reportedly after this winter but don't really need? Will he sign another starter and/or potentially deal one? Will the Nationals actually keep Papelbon and Storen, which they're totally willing to... When will this Hot Stove speculation finally end?