Mike Rizzo was asked about the Washington Nationals' plan for their outfield alignment and he discussed what both Ben Revere and Michael Taylor bring to the table and how things might shake out in 2016. Could Jayson Werth be the odd man out?

Mike Rizzo wasn't ready to hand the everyday job in center field to Ben Revere when the Washington Nationals acquired the 27-year-old outfielder from the Toronto Blue Jays in January.

As he explained it, in a conference call with reporters, it was something that would be decided in Spring Training.

Michael Taylor played center the majority of time for the Nationals in 2015, with expected starter Denard Span sidelined by injury, struggled at times offensively, but impressed.

"[Revere has] played all three positions. He’s played center field extremely well. We know he can hit at the top of the lineup. We got ourselves five really good outfielders..." -Mike Rizzo on Nationals' outfield alignment after adding Revere

Revere, in his sixth major league season, put up a .306/.342/.377 line with 22 doubles, seven triples, two home runs and 31 stolen bases in 152 games and 634 plate appearances for the Philadelphia Phillies and Toronto Blue Jays.

"That remains to be seen," Rizzo told reporters last month. [Revere has] played all three positions. He’s played center field extremely well. We know he can hit at the top of the lineup. We got ourselves five really good outfielders, I think, on the roster right now that are gonna compete for playing time. Jayson Werth and [Bryce Harper], obviously, there gonna get their at-bats whenever they’re able to do so. You got Michael Taylor, a special prospect and a really good player that emerged on the big league level last year. You got yourself [Matt] den Dekker, who can really do a lot of things for us off the bench. And Ben. So we like where we’re at right now depth-wise in the outfield."

The Nationals' outfielders will come to Spring Training and sort things out with the final decision going to Baker, but that won't stop people from asking Rizzo who he thinks will win the spot in center over the next two months.

MLB Network Radio hosts Jim Bowden and Craig Mish asked Rizzo in an interview this afternoon and the General Manager went on at length about what each outfielder brings to the table and how things will shake out.

"We love both players," he explained. "Both players are plus plus defenders. Michael Taylor may be as good as anybody around. Just scratching the surface of his big league ability. A guy that was thrown into the big leagues probably ... maybe a half a season earlier than I would have liked to have seen him just because of the injury to Denard Span where Michael had to take the reps every day, day-in and day-out in center field.

"Ben [Revere] brings a skill set that's very, very unique. He hits at the top of the order. He's probably as fast as anybody in the league. He's coming off three outstanding seasons..." -Mike Rizzo on Nationals' outfielder Ben Revere

"So we feel good about where he's at in his developmental curve. We see big things ahead of him. A guy that can steal you bases, hit home runs, play outstanding defense, he's got an outstanding throwing arm and really checks a lot of boxes as far as being a terrific, everyday major league player. We love Michael."

"Ben brings a skill set that's very, very unique. He hits at the top of the order. He's probably as fast as anybody in the league. He's coming off three outstanding seasons. High average, high on-base last year. He went over to Toronto and helped them get to the playoffs and he played extremely well, so those are two guys that can add athleticism, speed, stolen bases and great defense to our lineup. I see them both getting ample opportunities and ample at bats in Spring Training. We'll fight to see who's going to win that competition in center field. Both guys are certainly capable of being everyday center fielders on a championship club."

Rizzo was asked if Revere's combination of a high on-base percentage and ability to lead off was potentially a better fit for the Nationals' roster as it's put together?

"Like I said," he explained, "they [have] different skill sets. The same question could be asked if we think Michael Taylor is a 25/25 guy, how does that affect the lineup? They have different skill sets and they bring different things to the table and there is always room for good players and the lineups and the way we forecast those kind of things will be discussed and Dusty will make those calls when the time is right to make them."

Another possibility... discussed after Rizzo was off the line: Revere in left, Taylor in center and Bryce Harper in right? That does, of course, leave Jayson Werth as a 36-year-old veteran, who may not be happy or ready to move into a fourth outfielder role.

Werth, who missed significant time with a wrist injury last season, after having offseason surgery on his shoulder, the result of a hit-by-pitch in June, was asked this winter if he still considered himself an everyday player?

"At some point it's not going to be the case," Werth acknowledged.

"It's just the reality of it. Until I feel like I can't play every day, I have no other reason to think I can't go out there and do what I've always done, so I feel good, I feel healthy. The wrist thing is tricky. I've had three surgery and four fractures. 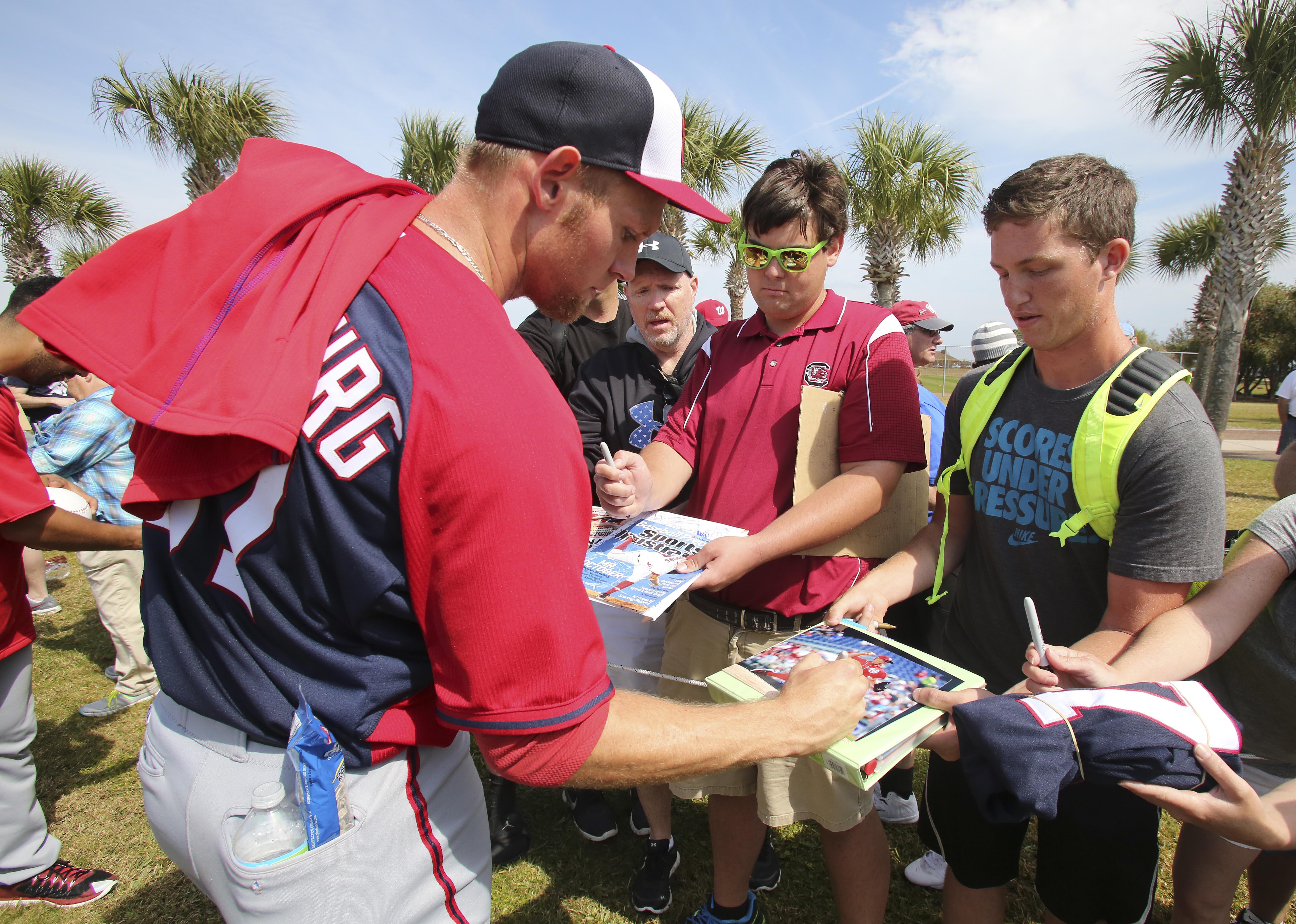 "It's a real thing. You can't outrun Father Time. I know I'm at the end of my career, more so than the beginning, so I know at some point, but I don't feel like I'm slowing down any time soon."

Will Revere's success in left last season and Taylor's potential lead Baker to make a tough decision when it comes to the outfield alignment? Will he mix and match with matchups in mind to get everyone enough at bats?

How will things shake out? We know that's what Spring Training is for and it's something that has been discussed all winter... but that won't stop us from discussing it over the next few months either...