Washington Nationals' skipper Dusty Baker has talked to reporters early this Spring about the staff and the talent the organization has assembled in Viera, Florida. Will Baker and Co. on the Nationals' bench help everyone forget 2015?

Dusty Baker is excited to be back in the game. He's talked about his time away from it early in Spring Training, admitting that he tried to tell himself he didn't miss baseball while he was away for two seasons following his dismissal as the Cincinnati Reds' manager in 2013. But now he's back.

"I was trying not to miss it. You can make yourself not miss something, and now that I'm back I really did indeed miss it. People say I look happier."

His enthusiasm has not gone unnoticed by his players, including Bryce Harper (or 'Royce' as Baker has called him at least twice now in his post-workout interviews with reporters), who talked about Baker's contagious enthusiasm.

And more importantly, Harper said, he knows the game and what it takes to play it at this level, which Baker did for 19 seasons before becoming a manager and extending his career in baseball for another twenty years.

Baker's feeling it all out as he works his way back in, but he's said more than once that he likes what he's seen from the entire organization early in Spring Training.

"I think this is going to be the most fun two years of my and their careers hopefully. It starts with no.1, but I've just got a very good vibe about this group from top-to-bottom. It's a very positive group. You talk to front office people everybody thinks in the same vein as far as winning."

He's also excited about the coaching staff he's partially assembled and partially inherited and he's getting to know all his coaches, which he said was really important, though it's necessarily a crash course.

"I've been knowing Chris Speier for a long time," Baker said of his bench coach. "I had [Assistant Hitting Coach] Jacque Jones as a player, but I've never coached with Jacque. [Hitting Coach] Rick Schu went to my high school, but I've never coached with Rick -- went to my high school long after me -- Mike [Maddux], I've known Mike for years, but I've never coached with him. I had his brother. There's a learning curve too. [Third base coach] Bobby Henley, I didn't know him. I knew [Catching Coordinator] Michael Barrett here, big time. I'm getting to know the minor league coaches, which I think are most important. They know what their roles are, and they know what I expect of them and then they're not here very long then they've got to go do their thing with their players and so it's been a crash course, but it's helped.

"Mike is into it and he's close to the pitchers. He defends them. He chastises them. He works them and he's a great communicator. So it's going to be outstanding." -Dusty Baker on Nationals' pitching coach Mike Maddux

"[Assistant GM] Bob Miller has helped a lot. [GM Mike] Rizzo has helped tremendously. [VP of International Operations] Johnny DiPuglia, who I knew before, he's helped a lot. I like this organization so far, it's one of the finest I've been in, in a short period of time."

Davey Lopes, the Nationals' First Base Coach, got the thumbs up from the NL MVP too, who excitedly approved of the Nationals' decision to sign the 70-year-old base running guru.

"I think it's huge," Harper said of that particular addition to the coaching staff.

"He's a guy that has helped a lot of players get better at that aspect, so when we signed him I was thrilled. Texted [Jayson Werth] and said, 'Hey, I can't wait to work with this guy.' Definitely high praise from J-Dub about him."

Maddux, whose signing was announced just before Baker's own introductory press conference in November, comes to D.C. highly recommended as well.

"I knew Mike from a long time ago," Baker said on Wednesday.

"Mike came over with high recommendations from [Ron Washington] who was one of my teammates too, with the Dodgers, and knew Wash up close, so that makes it easy -- boom -- to make that phone call and to get the blessing of a person that you trust."

He said that he likes Maddux's enthusiasm.

"Mike is into it and he's close to the pitchers. He defends them. He chastises them. He works them and he's a great communicator. So it's going to be outstanding. It's an outstanding staff we put together."

Then there was the surprise arrival of a former National who showed up in uniform at Space Coast Stadium as a guest instructor on Wednesday.

Nick Johnson is going to be hanging around, for the next ten days, with the length of his stay according to a report by MLB.com's Bill Ladson.

Baker explained that it was his idea to bring Johnson to Viera, four years after his ten-year major league career came to an end and seven years after he last played for the Expos/Nationals (2004-2009).

Tough decisions ahead for Dusty Baker and his staff 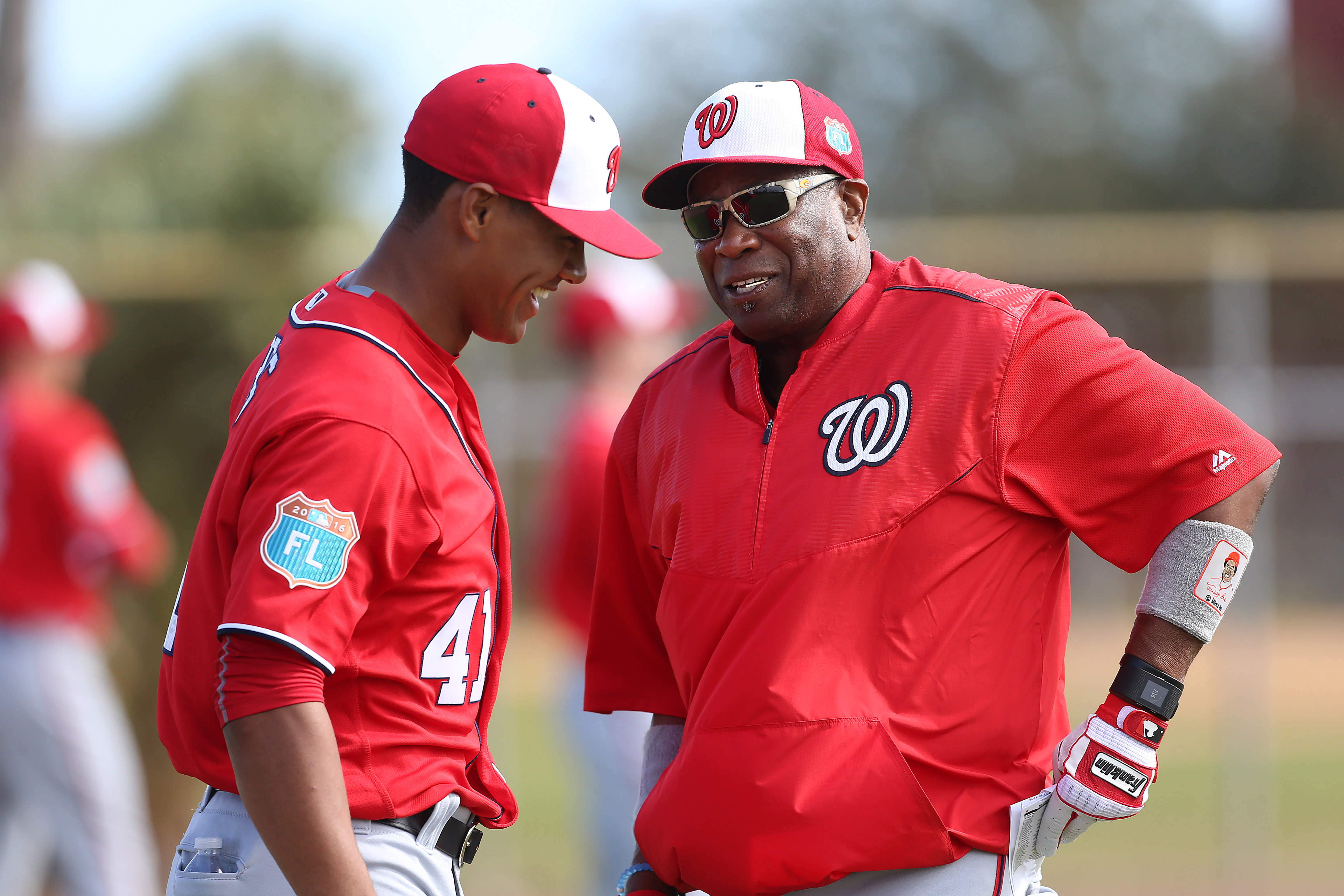 "He's from my home town," the 66-year-old skipper explained. "I knew him, but I knew his uncle Larry Bowa better and then we were in an 'establishment' ... at the same time and it just came to me, and I said 'Man, I think...' -- because the real good organizations that I've been in, they have some history, which we don't have much here and especially I thought back to my Dodger days, there was [Roy] Campanella, there was [Don] Newcombe, there was Sandy Koufax, there was all these greats in camp that if they could say one thing to help a kid figure it out, I mean just one pitch, or one theory on how to hit a curveball or whatever, I've seen it turn people's careers around."

"I know Nick was popular here," Baker continued. "He was a very good player. He could also tell people the ups and downs and what it's like to get injured and [have] your career cut short, and I just thought that Nick would be -- and to talk to Zim about playing first base or talk to the kids about hitting and I just thought it just fit.

"And then I asked permission of [Rizzo]. It's easy to spend somebody else's money. I can do that real good."