The Washington Nationals made the decision to bring Jonathan Papelbon back even after his dugout altercation with Bryce Harper last season. Is it possible that the 35-year-old closer actually ends up becoming a leader in the Nats' clubhouse?

The first we heard about Washington Nationals' closer Jonathan Papelbon this Spring, after the 35-year-old reliever met with reporters to address last season's dugout altercation with Bryce Harper and try to put it behind him, he was talking to teammate Gio Gonzalez, admonishing the left-hander for not properly calling out to a fielder on a grounder toward first during pitcher's fielding practice.

ESPN.com's Eddie Matz wrote about the interaction in an article about how Papelbon is perceived as something of a leader inside the Nationals' clubhouse:

"Gonzalez, en route to the bag, yelled a singular 'take it' to the fielder, it was Papelbon who reminded him that yelling it once isn’t enough. 'Three times,' he said, in a Southern drawl befitting a drill sergeant, as Gonzalez trotted back to the mound. 'Take it, take it, take it.'"

New manager Dusty Baker took note of the self-policing taking place on the field as the Nats were participating in the first workouts of the Spring.

"[Papelbon] got on Gio because he messed up a couple times out there, he said, 'Do it again!' and I was like, 'Man that's the kind of stuff I kind of like because I don't have to say it.'" -Dusty Baker on Jonathan Papelbon interacting with Gio Gonzalez

"Everybody worked hard," Baker told reporters at the end of that day."They were all working, having fun in competition, blocking balls and covering first base and [Papelbon] got on Gio because he messed up a couple times out there, he said, 'Do it again!' and I was like, 'Man that's the kind of stuff I kind of like because I don't have to say it.' When your players get on each other, that's a sign to me of a good team."

Gonzalez said he didn't mind Papelbon sharing his thoughts, as ESPN's Matz noted, in fact, he welcomed it as helpful advice:

"I love him for the fact that he wants to tell you the truth. He doesn’t beat around the bush and he comes at you the right way. He wants the best for you, and he’s gonna bust your tail to make sure you become the ultimate ballplayer. The littlest thing in the world means the biggest thing to him."

Baker brought the closer up again when asked about pitchers, in general, being leaders on a team, and whether or not Bronson Arroyo, in particular, possessed those qualities.

"Bronson knows how to get it done," Baker explained. "He shows you. He teaches. When I went to a game with the Diamondbacks, I was sitting in the stands a couple years ago and I saw him sitting on the bench talking to the young guys and I know what he was doing. I saw him with [Mike] Leake. And people follow him. That's what a leader does. They don't say, 'Let's go!' they just go and people follow. I think Papelbon is a leader too. I can tell. [Max] Scherzer, people listen to him. It ain't that easy to lead, you know."

After trading Drew Storen last month, Nationals' GM Mike Rizzo talked about Papelbon returning to the nation's capital this season and what he thought the reliever brought to the table:

"He’s been very effective at it his entire career, including last year except for the last portion of the season. This guy is a quality reliever, quality closer. He’s been in the biggest stage that you can be in. He pitched the last out of a World Series game and has a World Series ring. He knows how to win. He brings a swagger to the bullpen and he’s a guy that we’re going to rely on to pitch late and leverage innings."

Papelbon talked in his press conference about the difficult position he put the Nationals in and the support he received from Rizzo and the Nationals' owners.

"When that ninth inning gate swings open you've got yourself a confident, swagger-type of relief pitcher coming to the mound. You can see that going back to Bruce Sutter, Lee Smith to Mariano Rivera, [Eric] Gagne and all the great ones." -Mike Rizzo on Jonathan Papelbon's swagger, closers in general

"It was a tough situation," he said, "and I think Rizzo and the ownership and myself and all of us included realized that I did something wrong and realized that the situation wasn't great, but, you know, I was in the situation that was tough and didn't react the way that I should have and yet at the same time, Rizzo showed support for me that went a huge way and ownership... ownership support and Rizzo's support means the world to me and I think that it's only going to make me want to go out and fight that much more for this ballclub this year and what they've done to keep me here and say, 'Hey, you know what, people make mistakes and he's still a valuable asset to this team and let's go win some ballgames."

Rizzo talked last week about moving past the incident and what he thought Papelbon still had to offer to the Nationals.

"Numbers-wise he was one of the premier closers in the game," he said of Papelbon's work last season.

"He does it differently now than he did five or six years ago with the Red Sox, but as far as performance-wise, he didn't blow his first save until August. All-Star, blowing two saves the whole season, being healthy the whole year and putting up good numbers and good peripherals, I think he had a really good year for us."

He was asked if Papelbon could have the swagger, flamboyance and confidence that he has without the temper and emotions that could "manifest in a negative way" as they did in the altercation with Harper?

"He had a negative altercation," Rizzo acknowledged, "but like I said, I'm not going to judge him or any other player by one incident. To me he's confident. He's got a swagger as [does] just about every other guy who comes into the ninth inning with the game on the line. 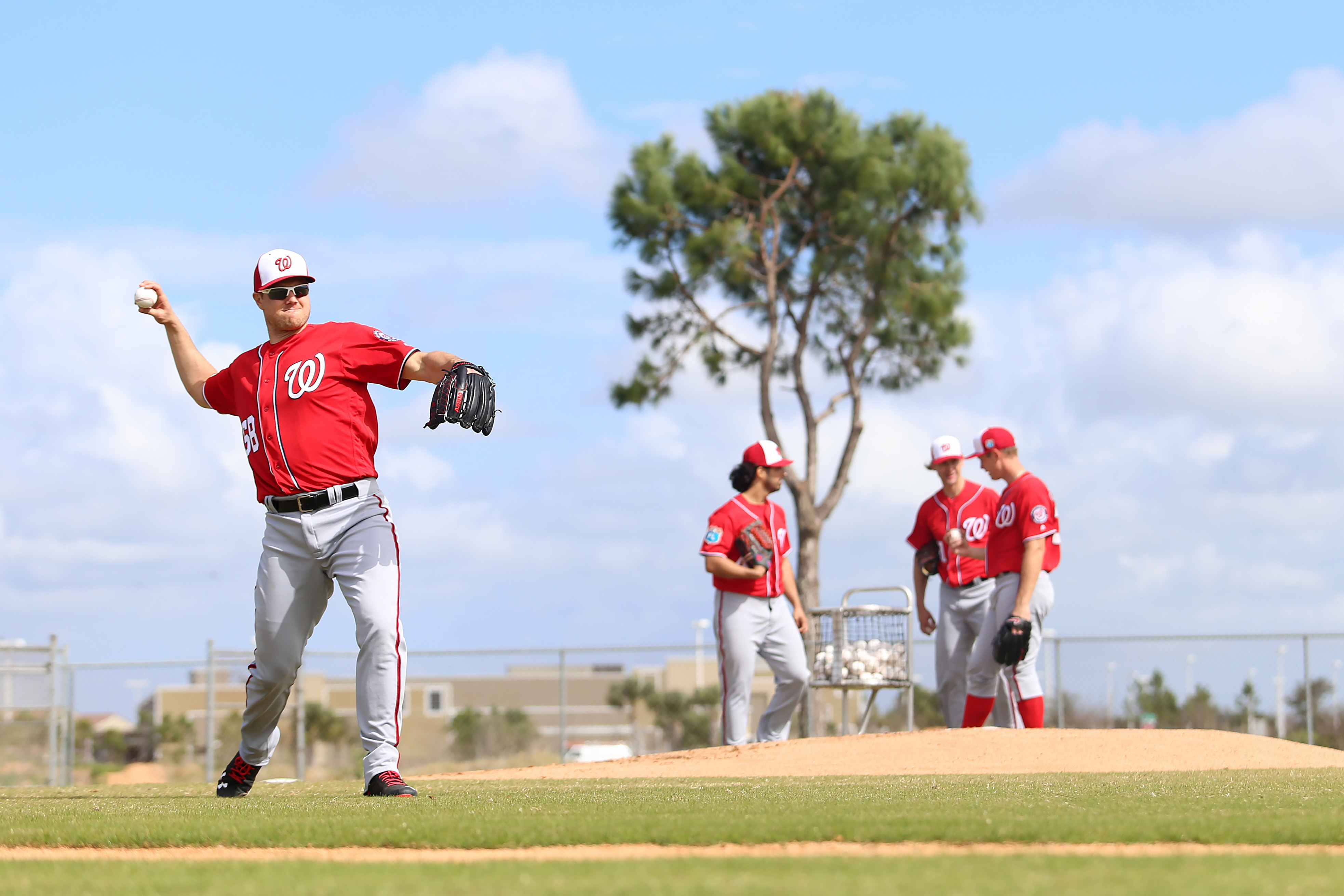 "So I think that he's not unique in that regard, there are a lot of guys, when that ninth inning gate swings open you've got yourself a confident, swagger-type of relief pitcher coming to the mound. You can see that going back to Bruce Sutter, Lee Smith to Mariano Rivera, [Eric] Gagne and all the great ones."

Can you handle it differently though, a reporter wondered, and have confidence and a business-like approach without the flamboyance?

"You've got guys shooting arrows into the air, you've got guys doing somersaults off the mound, so there are a lot of different ways to handle it," Rizzo said.

"But you're talking about adrenaline junkies that love the spotlight of that ninth inning and their personality has to fit it because the good ones thrive on it and the okay ones, you kind of back off on them."