New Washington Nationals' manager Dusty Baker talked about how big Jayson Werth has been for Bryce Harper, telling reporters Werth has been as important to the Nats' 23-year-old right fielder as Hank Aaron was to him when he first turned pro...

Did Jayson Werth change the baseball culture in the nation's capital? Did the fact that he signed a 7-year/$126M deal with the Washington Nationals put the team on the map as a potential free agent destination and really help to change the perception of the Nats' franchise? These things are debatable.

Werth, who will turn 37 in May, is coming off a long, frustrating, injury-filled campaign that he said was a wash, and he's heading into the sixth year of that seven-year deal, which will pay him $21M in each of the next two seasons.

How much does he have left in the tank? Will the Nationals, who pursued a number of free agent outfielders this winter and added Ben Revere to the mix, begin to transition Werth into a backup role at some point? Werth told reporters this week that reports of his demise have been exaggerated.

"The stuff I've been reading, it seems like I'm already done," Werth said, as quoted by MASNSports.com's Mark Zuckerman among others:

"I don't know. You guys might have a different idea than I do, but I'm gonna play this thing out as long as I can."

What Werth has left and what the future holds for the veteran outfielder, all of that is yet to be determined, what is clear, however, is that the 13-year veteran has played an important role in the development of 2010 Nationals' no.1 overall pick, Bryce Harper.

As Harper has explained over the years, Werth has been there for him from the start.

"J-Dub has been in this game for a long time and ever since the first day of Spring Training in my first year, he has always helped me out," Harper told MLB.com's Bill Ladson in June of 2012.

"He has been there for me. Anything that I ever needed, [he was there].":

"He really took me under his wing and he said, ‘Follow me, let’s get this thing done.’ He has taught me a lot about running the bases, playing the outfield, hitting and what pitchers do. Just a lot of things rookies need to learn. He has been there since Day 1. .. He wants what’s best for the whole team. He tries to help everybody on this club. It has been huge to have him."

"I owe him a lot," Harper told reporters including MASN's Byron Kerr in 2013:

"Everything he has done for me from outfield, base running, hitting, just having that veteran experience from him dealing with pitchers and dealing with outfield situations, things like that.

"He is like an older brother to me. I think having him here and having him teaching me things every day, it has been pretty incredible."

When Harper won the National League MVP award this winter, he thanked Werth and others for the role they played in getting him to that point.

"Having the help of Jayson Werth and [first base/outfield coach] Tony Tarasco, two guys that helped me every single day, day-in and day-out, I think it's huge," Harper said.

"[Hank Aaron] told my mom that he would take care of me like I was his son when I first signed. He made me go to church, he made me do everything, eat right, sleep right, train right." -Dusty Baker on the role Hank Aaron played in his career

"Being able to have guys, Ian Desmond, Jayson Werth, the two guys that pushed me all year, pushed me last year, have done things for me that I couldn't imagine my teammates doing for me and I can't thank them enough," he added.

New Nationals' skipper Dusty Baker is getting his first glimpse of the dynamic between the Nationals' outfielders and he talked last week about the importance of the relationship between Harper and Werth, and how important it is to have a mentor available for a young star.

"It's very important," Baker said. "I mean, because if they're all the same age, you don't know who to lean on and who do you lean on for wisdom and knowledge. That's why I like the mixture of youth and veterans, because I've been in both shoes. I was the same age as Bryce when Hank Aaron was about the same age as [Werth]. So you hope that your leaders are also some of your best citizens as well, that makes it easy to show guys the right way to be and if they're not then they can also show them the wrong way to be from the beginning, then you've got a monster on your hands.

Baker was asked if Aaron was like that for him, helping him like Werth has helped Harper?

"He told my mom that he would take care of me like I was his son when I first signed. He made me go to church, he made me do everything, eat right, sleep right, train right. How to conduct yourself, how to be a pro."

A reporter noted that Harper went so far as to say that he even eats what Werth eats. 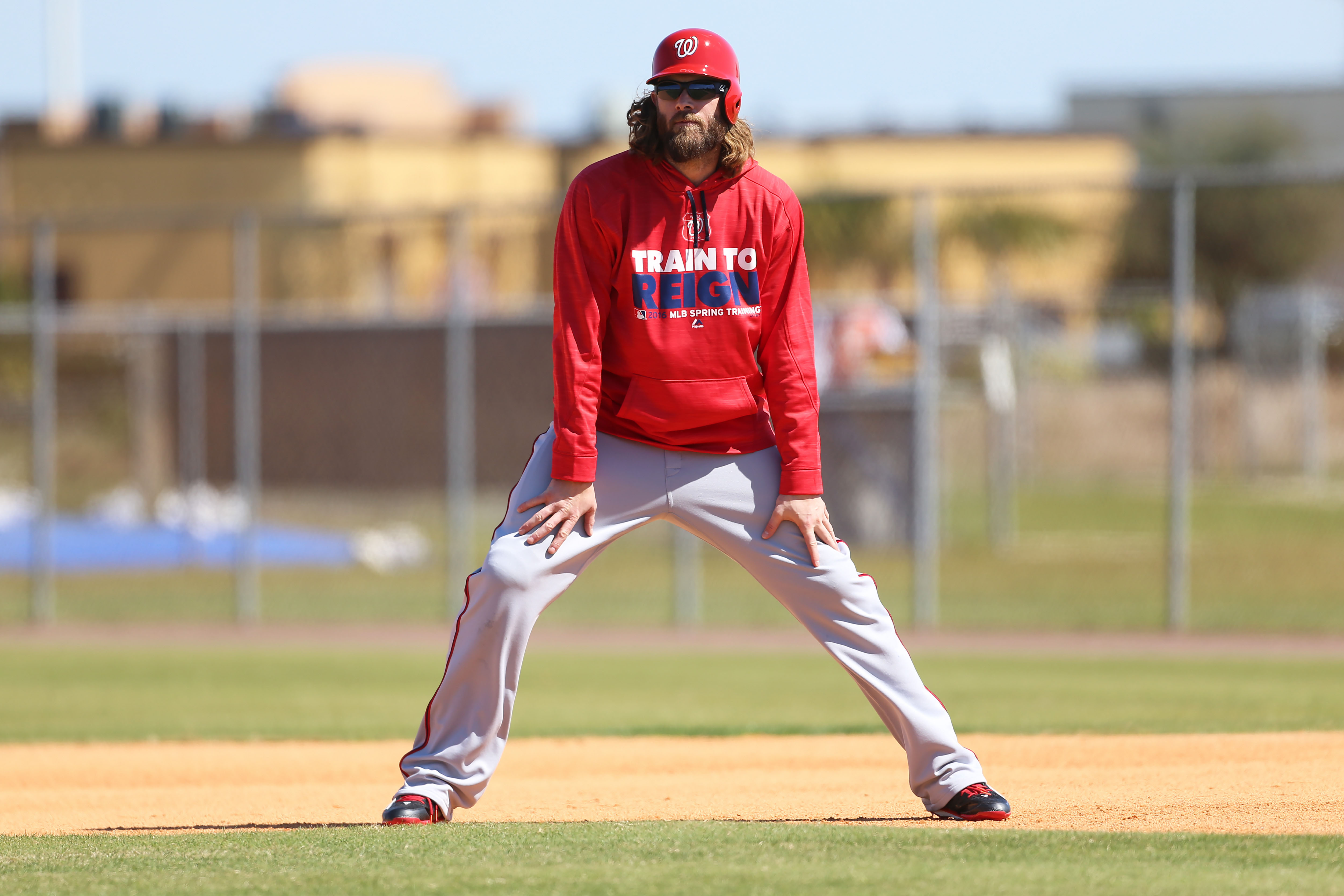 "Hank Aaron had us eat our main meal at twelve to one o'clock, no later, for the ballgame, get up and eat breakfast, which I didn't really like, and it worked for him and it's worked for JW too.

"I'm just getting to know JW, but I can tell he takes care of himself. If you want to play this game for a long time, you've got to take care of yourself."

"Most of us had somebody to show us the way," Baker said at another point in his conversation with reporters last week.

"Some day Bryce is going to show somebody the way and you hope that the way that they show them is the right way, but it's important that they were shown the right way in the beginning."