Washington Nationals and Houston Astros call it a draw, 1-1: Joe Ross vs the 'Stros

Joe Ross made his third appearance and second start of the Spring this afternoon in Space Coast Stadium, giving up one run, on a Carlos Correa home run, in four innings of work in what ended up a 1-1 tie between the Washington Nationals and Houston Astros.

Share All sharing options for: Washington Nationals and Houston Astros call it a draw, 1-1: Joe Ross vs the 'Stros

The big takeaway coming out of Joe Ross' last start was the unveiling of the split-finger fastball the 22-year-old starter has been working on this Spring and its origin story. Handed down from Curt Schilling to Jonathan Papelbon and on to Ross, the pitch, Ross hopes, will give him a fourth option along with his fastball, slider and changeup, which is another work in progress for the 2011 1st Round pick.

"I figured if Schilling throws a splitter and he taught Papelbon to throw a splitter, I should probably try it at least one time," Ross told reporters, including MLB.com's Jamal Collier.

Ross said he threw the pitch about five times in the 51-pitch outing against the Miami Marlins last week in which he gave up four hits, a walk and two earned runs, striking out four in 2 ⅔ innings.

Acquired from the San Diego Padres who drafted him 25th overall in 2011 and then traded him to the Nationals along with Trea Turner in last winter's three-team deal with the Tampa Bay Rays, Ross, who debuted in the majors last year and is expected to fill a starting role this season, talked after the outing against the Fish about the competition at the back of the Nats' rotation this Spring.

"I guess anything can happen," Ross said, as quoted on MLB.com. "So just trying to stay healthy and work on all that stuff, and especially that splitter. Hopefully that can be a big fourth pitch."

This afternoon in Space Coast Stadium, Ross gave up a leadoff single by Jose Altuve on the first pitch of the game, but got a 6-4-3 double play out of Jake Marisnick on his second offering.

With two down, however, Astros' shortstop Carlos Correa crushed a 1-2 fastball, sending a solo home run soaring out to left for a 1-0 lead after a half-inning.

Ross retired the Astros in order, on three grounders, in the top of the second, and worked around a one-out single by Altuve and a two-out walk to Correa for a scoreless third.

Ross got an assist from Bryce Harper in right when Tyler White tried to go first-to-third on Bryce Harper's arm on a one-out single by Jon Singleton, but the Astros' first baseman was dead-to-rights, tagged out by Anthony Rendon for the second out of the frame.

Singleton took second with outfielder Andrew Aplin at the plate, but was stranded there at the end of the Astros' fourth.

View of sunny Space Coast Stadium during the #Nats' matchup with the #Astros... via FBB's Doghouse and Mrs. D.: pic.twitter.com/DGIVUNTTZg

• Danny Espinosa and Trea Turner are considered the frontrunners for the Opening Day job at short, with Espinosa the likely option for a variety of previously discussed reasons, but neither player was in the lineup at the start today.

Brendan Ryan got the start against the Astros. Ryan singled in the third for the first hit off Astros' lefty Dallas Keuchel, but was stranded. He went 1 for 2 on the day.

• Ryan Zimmerman, in his second game of the Spring, was the DH again today, but Dusty Baker told reporters this week that the 31-year-old infielder would likely his first game at first base tomorrow. Zimmerman was 0 for 2 today.

• Diminutive Astros' second baseman Jose Altuve was 2 for 2 today after he buzzed Ross' tower with a line drive single with one down in the third. He finished the day 2 for 3.

• Yusmeiro Petit retired the Astros in order after taking over on the mound in the top of the fifth inning. Petit worked around a two-out single in a scoreless sixth, leaving him with one run on four hits over seven innings pitched this Spring.

• Matt Skole walked, Matt den Dekker K'd, but took first on a wild pitch and Daniel Murphy reached on an infield single, with den Dekker hustling to second to beat out the force as the Nationals loaded the bases in the home-half of the sixth inning, and a HBP from Astros' righty James Hoyt forced in the tying run, 1-1.

Are you worried about Espinosa's hitless start to ST? 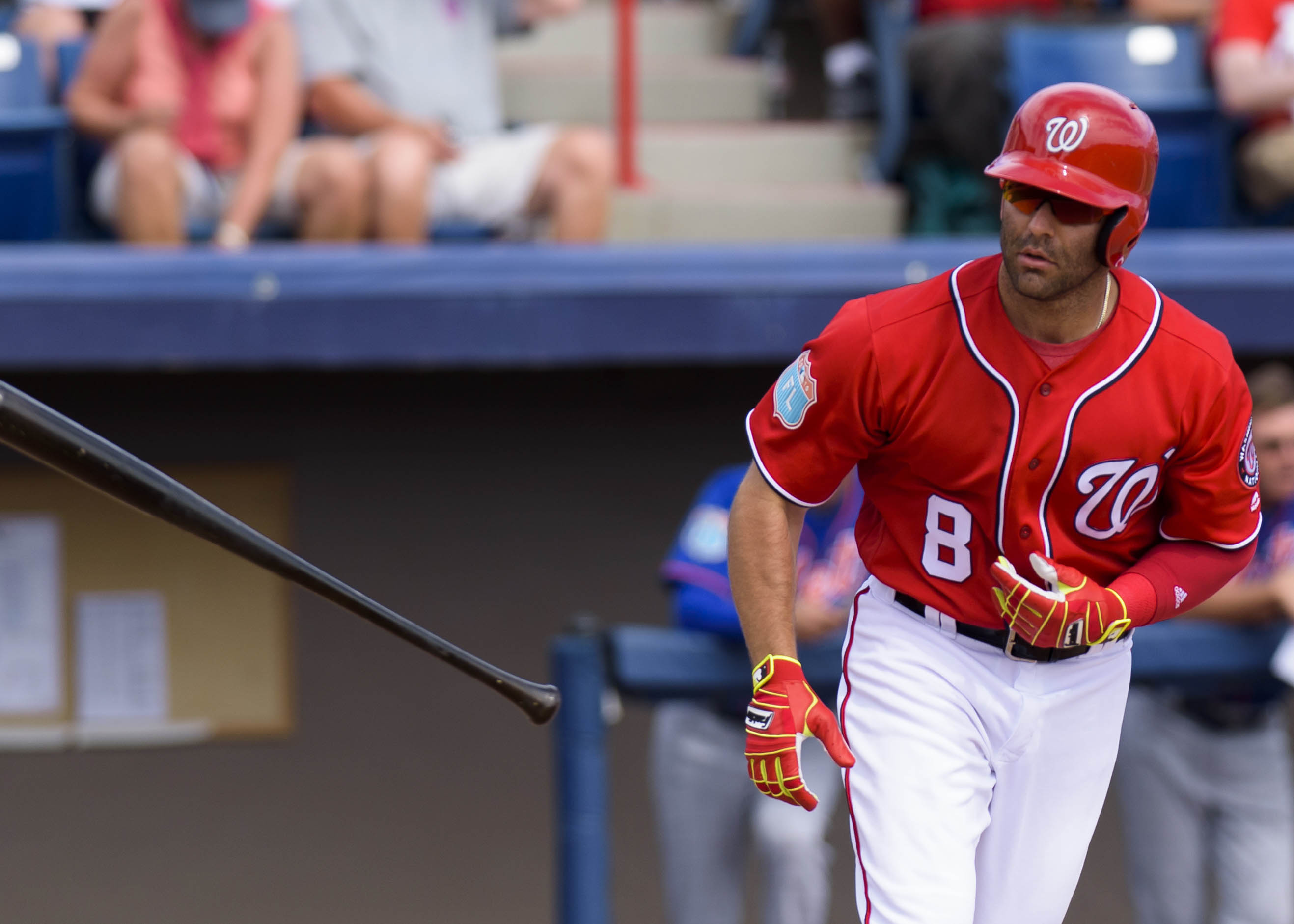 • Nick Lee worked around an error for a scoreless top of the seventh inning.

• The Nationals loaded the bases with two out in the home-half of the seventh with Chris Heisey and Tony Campana singling around a walk by Matt Skole. den Dekker stepped in with a chance to break up the tie, but grounded out to first base. Still 1-1.

• Felipe Rivero mowed the 'Stros down in a quick, 1-2-3 frame in which he collected two Ks.

• Reed Johnson and Stephen Drew hit back-to-back one-out singles off Jordan Jankowski in the Nationals' half of the eighth inning, but Jose Lobaton struck out with the potential go-ahead run 90 feet from home, leaving it up to Trea Turner, who went down swinging at a full-count curve.

• Jonathan Papelbon retired the Astros in order in a quick top of the ninth inning and when the Nationals failed to score they settled for a draw for the second straight day.