Michael A. Taylor loves hitting with runners in scoring position and he crushed a three-run blast this afternoon that put the Washington Nationals up 4-0 in what ended up a 4-2 win over the Miami Marlins in Roger Dean Stadium. M-A-T!!

Though his start against the Miami Marlins was his second in Grapefruit League action, new Washington Nationals' skipper Dusty Baker has been clear that Blake Treinen is "not a starter" as Washington Post writer Chelsea Janes noted on Twitter yesterday, he's just started a couple times.

Giving Treinen a start earlier this Spring, Baker said, gave him an opportunity to face "the best part of the lineup," as opposed to facing minor leaguers and late-game replacements if the right-hander pitched in later innings.

This afternoon, Treinen was starting in place of Bronson Arroyo, who was scratched from his scheduled start with right shoulder soreness. Treinen got off to a good start, working quickly and mowing the Marlins down in the first.

Treinen struck out the side on eleven pitches in a dominant bottom of the first, and added a K in the second as he worked around a two-out single by Cole Gillespie for another quick, scoreless frame.

Treinen, according to reports from Jupiter, Florida's Roger Dean Stadium, threw a total of 31 pitches before he was done for the day.

• Danny Espinosa started today's game 0 for 17 with eight Ks so far this Spring, though he assured reporters on Tuesday that he wasn't "overly concerned" with his hitless start to Grapefruit League action.

"When fastball timing is off, rushing and late to the fastball, then you rush to offspeed a little bit. That’s it. … It’s just a matter of getting in there and getting comfortable and getting a good one to hit and not missing it. I’m not really concerned right now."

Espinosa sent a fly to center in his first at bat this afternoon, 0 for 18. He faced Chen again in his second at bat, and hit a single to left to break his 0 for streak. 1 for 19. Espinosa, whose first hit was from the right side against Chen, singled again in his next at bat, from the left side that time, against right-hander Jarred Cosart. Espinosa ended the day 2 for 3 and 2 for 20 overall.

• Marlins' lefty Wei-Yin Chen, who signed a 5-year/$80M deal with the Fish this winter, started today's game with two quick, scoreless innings, but the Nationals got to the southpaw in the third with Trea Turner, Jhonatan Solano and Ben Revere hitting back-to-back-to-back singles off Miami's starter, with Revere's bringing Turner in from second, 1-0.

Michael A. Taylor stepped in next, with runners on first and second and came through with a runner in scoring position again*, hitting a three-run blast out to right-center field to put the Nationals up 4-0.

Taylor, 24, improved to 11 for 25 with three doubles and two home runs this Spring with the blast, as he continues to impress in Grapefruit League action. Taylor might start the season as the Nationals' fourth outfielder, will he end the year in that role? 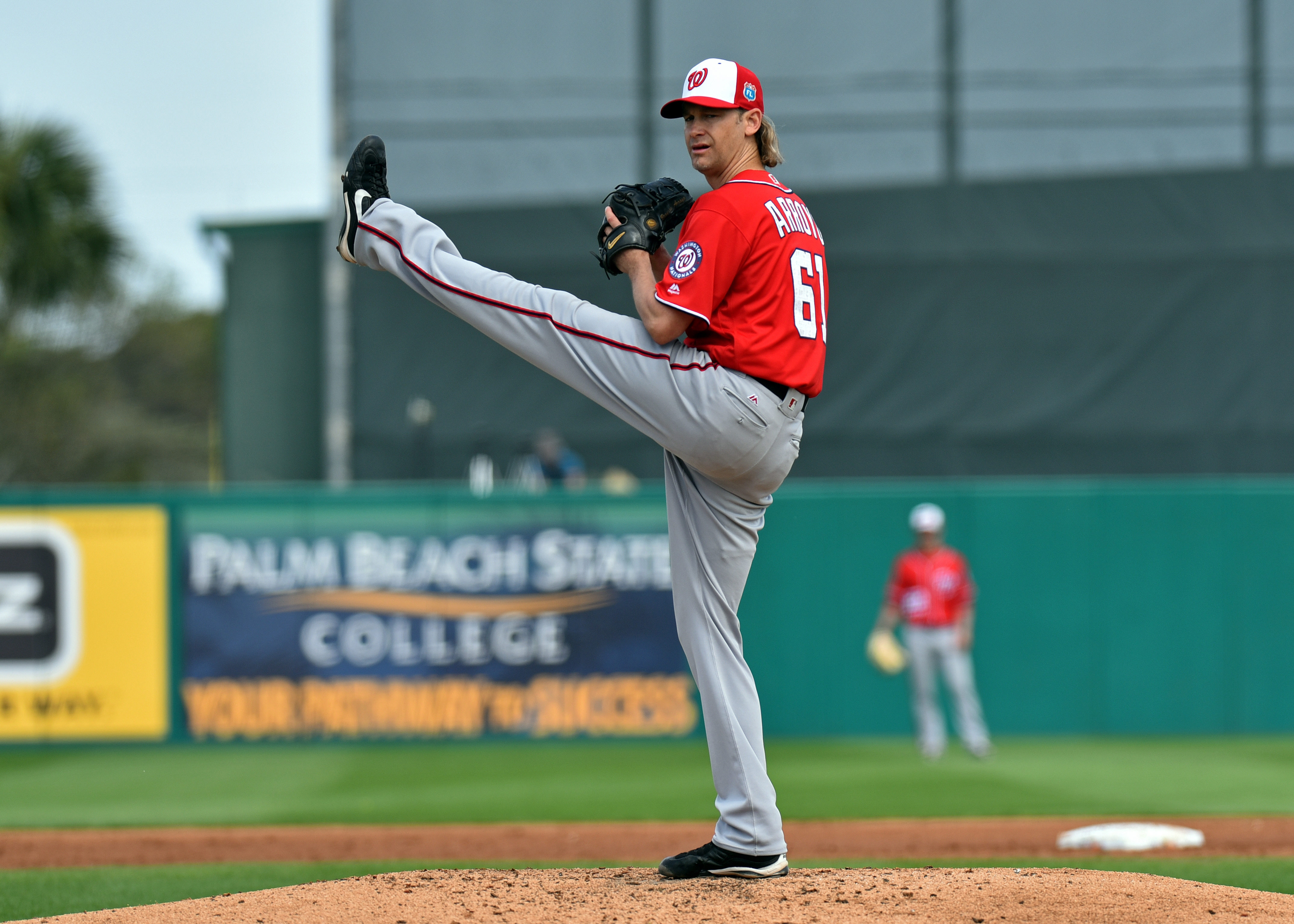 • Matt Belisle followed Blake Treinen on the mound, striking out one batter in 1 ⅔ IP.

• Felipe Rivero came on with two out in the fourth and struck out lefty Justin Bour, then came back out for the bottom of the fifth and added two more Ks in a 1-2-3 frame.

• Nick Masset gave up a double and an RBI triple by former Nats' prospect Destin Hood and Dee Gordon, respectively, in the Marlins' sixth and a wild pitch brought Gordon in from third, 4-2 Nationals.

• Rafael Martin worked around a one-out single in the Marlins' seventh, giving him six scoreless innings this Spring in which he's allowed just four hits and one walk.

• Erik Davis came on in a save situation and hit the first batter he faced, Moises Sierra. Two outs later, Isaac Galloway singled to send Sierra around to third, but both runners were stranded when he popped up pinch hitter Carlos Lopez to end it. 4-2 Nationals.