Bryce Harper homered twice and Washington Nationals' starter Joe Ross apparently avoided a serious injury on a line drive back to the mound in what ended up a 7-6 loss to the Detroit Tigers this afternoon in Lakeland, Florida's Joker Marchant Stadium.

Joe Ross gave up five hits, two walks and one earned run last time out in a start against the Houston Astros. The one run he allowed came on a solo home run by Astros' shortstop Carlos Correa. Outside of that first inning blast, it was a solid outing by the 22-year-old Washington Nationals' right-hander who debuted for the Nationals in 2015, after the three-team trade with the San Diego Padres and Tampa Bay Rays that brought the former first-round pick (2011) and 2014 first-round pick Trea Turner to the nation's capital.

Through three appearances this Spring before today, two of them starts, Ross allowed 12 hits, five runs, three earned, and four walks, while striking out eight batters.

Nationals' skipper Dusty Baker was impressed with what he saw from Ross on the mound in the 61-pitch effort against the Astros.

"He was outstanding," Baker said, as quoted by Washington Post writer James Wagner:

"Other than home run, and he didn’t give it up to a slouch, Joe Ross was electric today. He threw easy gas and easy strikes. I like some Joe Ross."

He's continuing to work on adding a reliable third and even fourth pitch to his repertoire, with a changeup in progress, and a splitter recommended by Jonathan Papelbon another possibility.

This afternoon in Space Coast Stadium, Ross took the mound with a 2-0 lead courtesy of a two-run home run off of Bryce Harper's bat in the top of the first and worked around a one-out single for a scoreless inning of work.

In the second, however, Ross took a comeback liner off Nick Castellanos' bat off his right leg/ankle and left the game after just 22 pitches...

Joe Ross exited the game with a member of the training staff after taking a line drive off his leg/foot area. Blake Treinen will take over.

The Nationals later announced that Ross suffered a right heel contusion and he will be reevaluated tomorrow:

Joe Ross left today's game with a right heel contusion. He will be reevaluated tomorrow.

• Daniel Murphy's one-out single in the first left him 6 for 28 so far this Spring, and put a runner on in front of Bryce Harper, who hit his first home run out to right-center on a 2-2 pitch up in the zone from Justin Verlander for the first runs scored off the Tigers' right-hander in ten innings in Grapefruit League action this season.

• Wilson Ramos hit a ground-rule double out to left off Verlander with one down in the second, leaving him 5 for 17 so far this Spring. He was stranded two outs later.

• Blake Treinen took over on the mound with a runner on and no one out in the second after Joe Ross was hit on the right ankle/foot by a comeback liner and after a fly to left, got an inning-ending 3-6 DP. Treinen worked around a one-out single in the third, catching left-handed hitting outfielder Anthony Gose looking with a two-strike fastball along the way. He ended up throwing a total of four innings out of the pen, giving up two hits and striking out three.

• Daniel Murphy improved to 7 for 29 in Grapefruit League action and made a heads up play on the basepaths in the next at bat, going first-to-third when Bryce Harper grounded into the shift and no one on the Tigers covered third. He was stranded at third, however. Still 2-0 Nats after two and a half.

• After grounding out the second time up, Harper hit his second home run of the Spring in his third at bat of the game, taking Verlander deep again and over the batter's eye 420ft+ to center field for a solo blast the made it 3-0 Nationals.

Al Kaline has been watching baseball in Tiger Town since 1953. He said that he's never seen a ball hit where Bryce Harper hit one today.

• Matt Belisle took over on the mound for the Nationals in the Tigers' sixth and gave up a one-out double, two-out RBI single a walk and a second RBI single as Detroit pulled within one, 3-2. Felipe Rivero came on in relief and gave up a double to center by Andrew Romine that tied it up at 3-3. 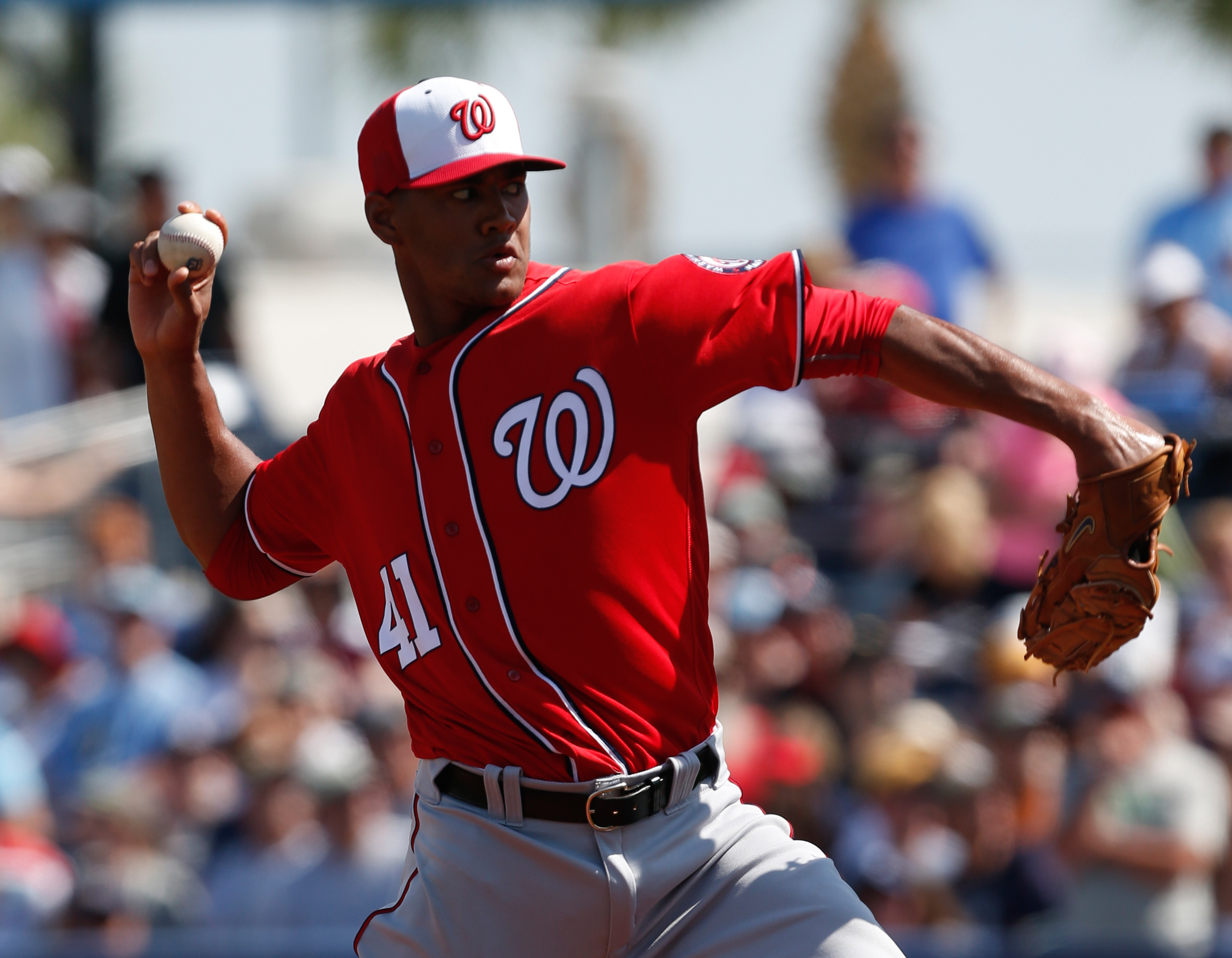 • Trea Turner singled to start the seventh, stole second and scored on an RBI single by Michael Taylor as the Nats' retook the lead, 4-3. Taylor improved to 15 for 31 with three doubles, three home runs and nine RBIs.

• Brendan Ryan doubled and scored on an RBI single by Jose Lobaton to increase the Nationals' lead to 6-3 in the eighth.

• Burke Badenhop gave up two runs in the Tigers' eighth as Detroit battled back to within one run. He was replaced on the mound by Aaron Laffey, who gave up a two-run double that put the Nationals behind, 7-6. That's how it ended.