How many at bats does Nationals' first baseman Ryan Zimmerman need to get ready?

We know the answer to the question in the title. Will Ryan Zimmerman get his 50 at bats this Spring? That's the question. If he doesn't people might start to worry about the Washington Nationals' first baseman? What's that? You say they already are worried?

Share All sharing options for: How many at bats does Nationals' first baseman Ryan Zimmerman need to get ready?

Ryan Zimmerman was asked about the ongoing issues with plantar fasciitis in his left foot, which cost him over a month on the DL last season, when he first arrived at Spring Training last month.

"That's one of those things where you don't really know," Zimmerman said. "But when I came back last year we had that managed and it was under control."

Time off and the custom orthotics he returned with allowed him to hit while healthy for the first time all season which seemed to make a difference:

Ryan Zimmerman tried to play through a bad foot for three months. Guess which ones: https://t.co/rYZlyIL3O8 pic.twitter.com/YaQklKZMu4

"Last year when I came back -- before the oblique -- I felt like I was playing the best I played since probably '08 or '09 when I was playing like I should be playing," he told reporters.

He played in 95 games total in 2015, a year after playing in just 61 when he missed time with a fractured thumb and a Grade 3 hamstring strain.

"He's a terrific run-producer. He's got one of those abilities that he can just drive in runs. A lot of times without getting a hit, with making an out..." -Mike Rizzo on Ryan Zimmerman on MLB Network Radio, December 2015

"It was nice to come back and kind of get that confidence," Zimmerman said of the productive late run last season.

"And now it's just a matter of getting rid of those little injuries and that's what we've been concentrating on this offseason."

Asked about his preparation for what will be his twelfth major league run, Zimmerman acknowledged that he has to do some things differently now.

"I think a lot of times in people's careers," Zimmerman explained, "you have to -- I guess 'transition' might be the best word -- or you have to change things up and do whatever you can to stay healthy and stay on the field."

"Obviously the longer you play the harder that gets," he said, so he was not lifting as much weight, and was instead focusing on, "... a lot of stretching, a lot of core stuff, a lot of little muscles that I've never, ever used before and using those to kind of keep me stable and the goal is to eliminate those soft tissue issues that have kind of plagued me over the last two years."

Zimmerman has yet to appear in a Spring Training game, with new skipper Dusty Baker telling reporters on Sunday that he hoped to have him in the lineup in the "next couple weeks."

Washington Post writer Chelsea Janes noted that, as far as the plantar fasciitis goes, the Nationals this Spring, "... are managing the chronic condition, which requires Zimmerman to wear special insoles and try to minimize time spent in metal cleats on hard infields."

"I think a lot of times in people's careers, you have to -- I guess 'transition' might be the best word -- or you have to change things up and do whatever you can to stay healthy and stay on the field." -Ryan Zimmerman on preparing for the 2016 campaign

He went through early Spring Training workouts with teammates, running in the outfield while teammates ran the bases according to the WaPost report, and as MLB.com's Bill Ladson noted, "Zimmerman's foot is OK.":

"It's a cautious approach, knowing I don't need that many at-bats down here to get ready," Zimmerman said recently. "I would be more worried if I haven't been able to do everything else. I have participated in everything but the running, which I did for the first time [Tuesday] and I feel good today."

As we've heard over the years, Zimmerman feels like he needs 50 or so at bats, "no more, no less," to get his timing down.

"He likes to get about 50 at-bats in spring training," WaPost reporter Adam Kilgore wrote in the Spring of 2012, which, "he figures is the minimum the team would let him take."

"I guess as soon as Zim gets his 50 at-bats, he’s ready," former Nationals' manager Davey Johnson joked at the time.

Those were the last two seasons Zimmerman played over 100 games. 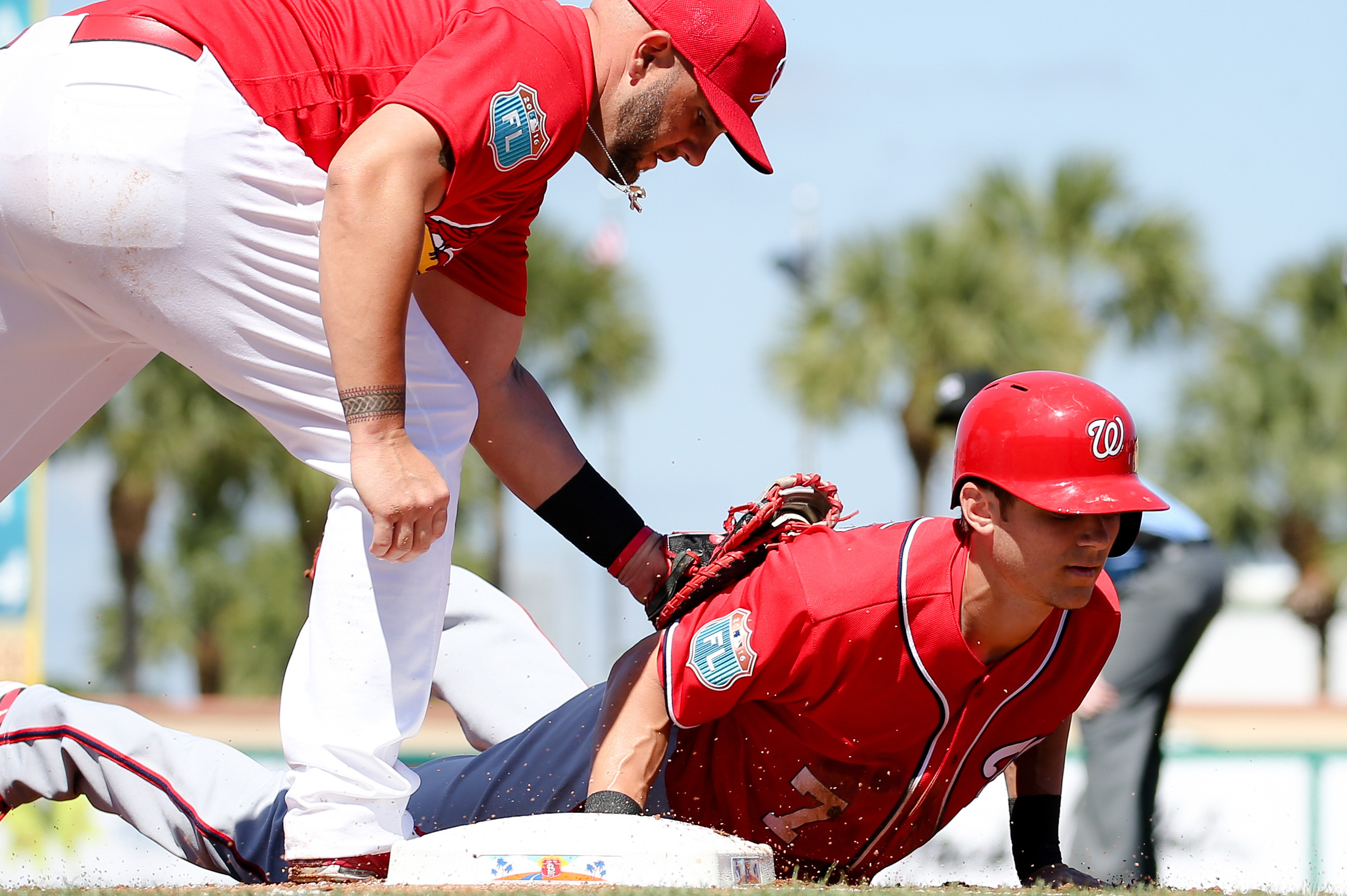 He needed multiple cortisone shots in his right shoulder that season and had to have surgery to clear out the AC joint that winter.

Wiil Zimmerman get his 50 at bats this Spring? We'll start to worry when/if he doesn't...